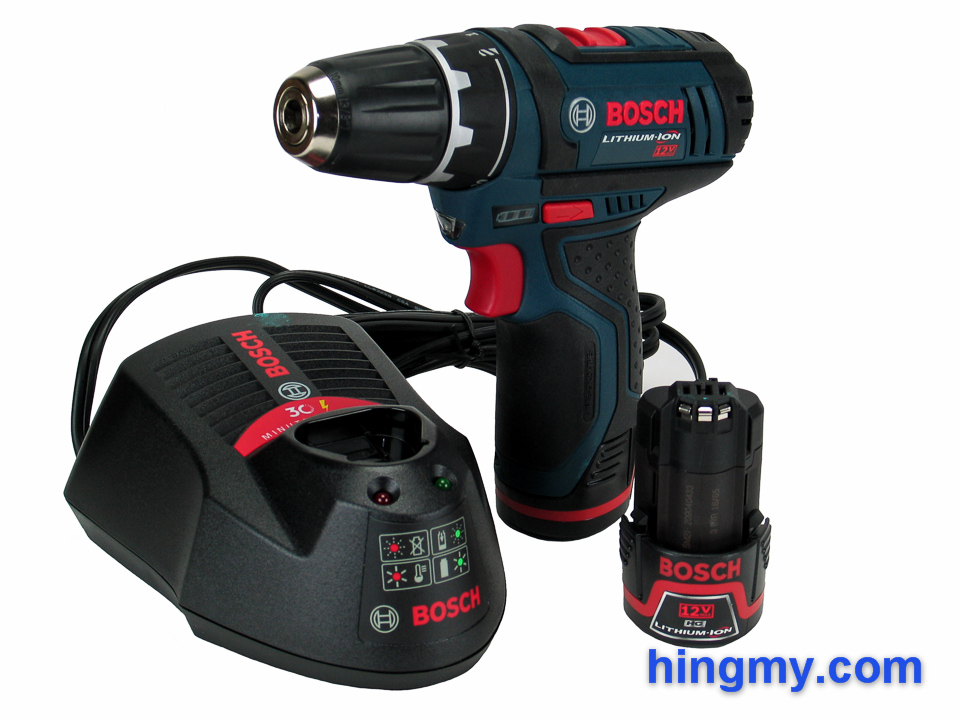 Another week, another L-Boxx to play with. This time the treasure contained within turned out to be the PS31, a small 12V cordless drill/driver from Bosch. Designed for installers, product assemblers, and trade professionals the PS31 comes with some very promising specs. Let's take look at what the PS31 can do in the Hingmy workshop.

The build quality of the PS31 is up to the high standard we have come to expect from Bosch. The monolithic body is covered with black rubber in strategic places that both form the grip and the protective bumpers. The tool is protected no matter which way it is put down. The flowing contours of the grip are pleasant to hold onto and allow the user to control the drill/driver with precision. There are no lose parts anywhere on the body.

The trigger is very precise across its usable range. Selecting and holding a specific speed takes little effort. Unfortunately a full 1/3 of the physical range is dead space.

There is simply no excuse for the runout of the PS31's chuck. Given what the competition offers, there is no reason to make it your problem.

The through-the-body style direction selector switch functions well, but feels sloppy. It is easy to move from side to side, but fails to register with authority. The middle position in particular is difficult to engage. The switch protrudes beyond the body of the tool. It moves a little when the tool is put down on its side, but not enough to shift into the neutral position. The engineering of this switch could have been done so much better.

In contrast the gear selector on the top of the tool is built well. It moves from one gear to the other with a satisfying click. There is never any doubt it has reached its resting position, and it'll never move on its own. 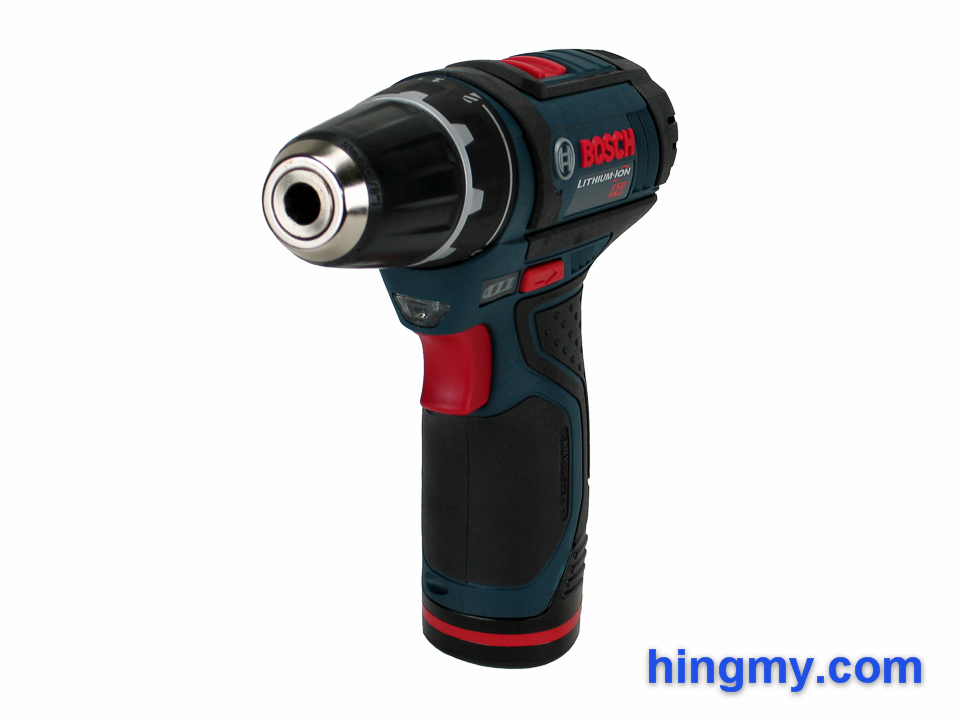 The LED work light installed above the trigger is very basic. It comes on when the trigger is engaged and distinguishes immediately when the trigger is released. The LED produces bright, white light, but the horrible lens cast shadows long before the barrel of the tool gets in the way of the light. To make matters worse, it is very hard to turn the light on without engaging the motor. Even if the light worked properly, the long nose of the tool cast a shadow across the work area long before the nose gets anywhere near the work surface.

All together this is one of the worst work light designs we have seen on a professional power tool. It barely functions as intended and should be a case study of bad design at design schools around the country. Bosch has shown that it can do much better.

The chuck of the PS31 is well built. The plastic housing is sturdier than most chucks made from the same material, but ultimately fails to compare well against metal chucks. At 3/8" in size the chuck is well matched with the motor of the PS31. A 3/8" drill bit pushes the tool to its limits, but not beyond.

Closing the chuck tightly enough when using high torque bits can be difficult. The motor produces too little torque at low speeds to do so. With a lot of effort it is possible to make the chuck work with any bit, but the process takes the user well beyond what can be called normal use. This problem is yet another reason why the PS31 performs better when using smaller bits.

Unfortunately our review model has an excessive amount of chuck runout. The tip of a drill bit moves a full +/- 1/16" out of center 2 1/2" from the tip of the chuck. Drilling precise holes, especially with long drill bits, is very hard. To make matters worse reviews around the web confirm that this is a common problem with the PS31. I have been searching for reasons to overlook this issue, but have not found any. There is simply no excuse for any amount of runout in a cordless drill given the near perfect precision of the competition. 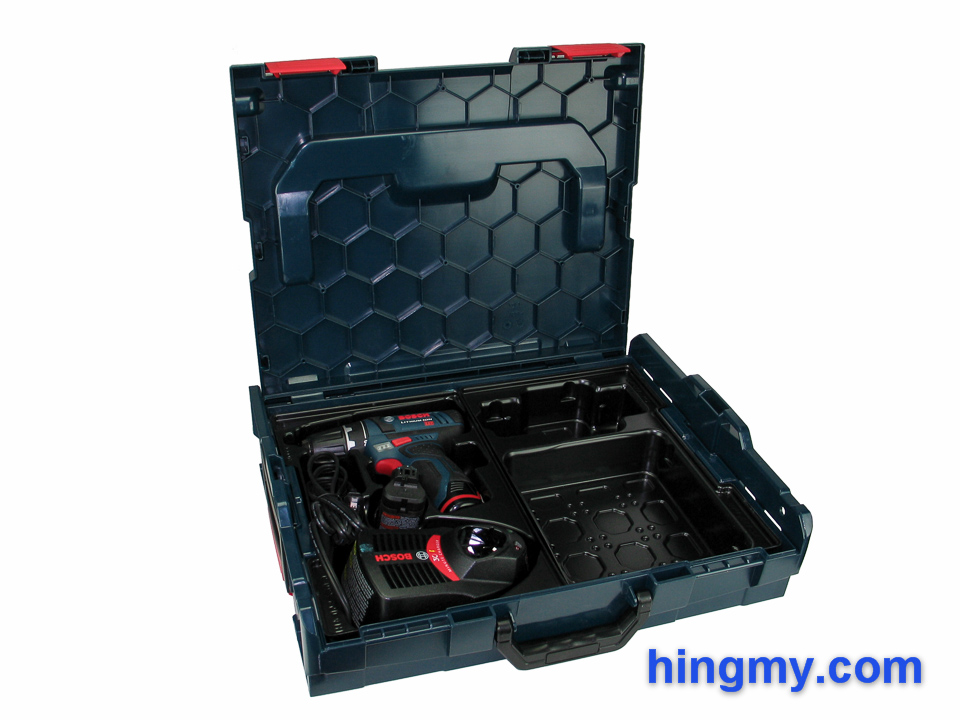 The PS31 comes equipped with an all-around excellent 20+1 position clutch. Each setting of the clutch is meaningful and different from its neighbors. Setting 20 is just barely strong enough to sink the head of a 3 inch screw below the surface of structural lumber. The lower range of the clutch is particularly useful for driving small fasteners. Appliance repair professionals can make good use of this feature. Switching from setting 1 into drill mode takes a full rotation of the chuck. This takes some effort to accomplish, but should be an infrequent occurrence on the job site.

The kit version of the PS31 comes with a very useful Bosch L-Boxx. Part of a storage system the box is engineered for daily use by contractors. Plastic inserts molded to fit the different parts of the kit secure everything inside. The tool and charger only take up half of the box. A generic insert takes up the other. You can either store your drill bits in the insert, or swap it out with one that comes with another Bosch 12V tool.

While not without its faults, the L-Boxx system is state-of-the-art at the moment. Contractors and homeowners alike will value the benefits the system offers. We have come a long way from generic plastic cases and budget-friendly fabric bags.

Drilling small holes is what the PS31 was made for. Holes smaller than 1/4" in diameter appear almost as fast as you can position the drill. Larger holes take more effort. The drill's limit seems to lie close to a bit diameter of 3/8". On a fresh charge the drill completes a hole of that diameter without binding, but the drill bucks in your hand. On deep holes the excessive runout of the chuck makes drilling without binding almost impossible.

Driving fasteners shorter than 2 inches is a pleasure with the PS31. The motor produces enough torque to sink each fastener at speed. The excellent clutch further increases the utility of the PS31 as a driver. The lower range of the clutch makes this drill/driver a good option for installing very small screws.

The tool has enough power to complete our standard 3 inch screw driving test, but the experience is not a happy one. Missing the hammer gear necessary to complete the task properly, the tool bucks all the way. You'll get the job done with a iron grip on the handle, but the process is not something you'd want to do more than a few times.

The endurance test threw me for a loop. I attempted to drill as many 3/8" holes as I could on a full charge. As expected the drill did well on the first 10, but quickly faltered after that. The bit began to bind as the battery lost its charge. This in turn heated up the battery. When the drill finally stopped after finishing ~18 holes (averaged across 3 runs) the battery was so hot the charger refused to charge it. A red light came on indicating the battery first had to cool down. This added another 10 minutes to the charge time of the battery.

Screw driving performance was not much better. The PS31 managed so sink a couple dozen 3 inch screws into construction grade lumber before the battery ran dry. Again the battery overheated and needed to cool down before being recharged. Judging from these test it is clear that the PS31 was not built for continuous, heavy use. I am sure that the batteries will not last when exposed to this sort of treatment on a regular basis. Your best bet is to either use the PS31 for diving short fasteners, or to limit your work to just a few screws at a time.

The Bosch 12V battery system is well engineered all around. The charger is both durable, and fast. It restores a dead battery in under 20 minutes. A couple of color coded LEDs and a pictogram leave little doubt about what the charger is doing.

Every Bosch 12V tool comes with a battery gauge located somewhere on the body of the tool. On the PS31 the gauge is just above the trigger. The gauge lights up every time the trigger is pressed. It show the battery's charge using three green LEDs. The information you can gather from the gauge is very limited. The gauge seems to be perpetually stuck half way showing two green lights. Given the relatively low capacity of the 12V battery, knowing that the battery is not full, but not dead either, is not very useful. This system needs some rework.

Bosch offers a good, but not great, amount of tools that use the same battery as the PS31. For the time being new models are being added suggesting the company is planning to keep the format alive for some time.

Bosch has recently updated the PS31. The new version, the PS32, comes with a state-of-the-art brushless motor. Promising more torque and longer battery life the PS32 goes a long way in addressing the problems of the PS31. Hopefully Bosch also fixed their manufacturing processes to eliminate the chuck runout. 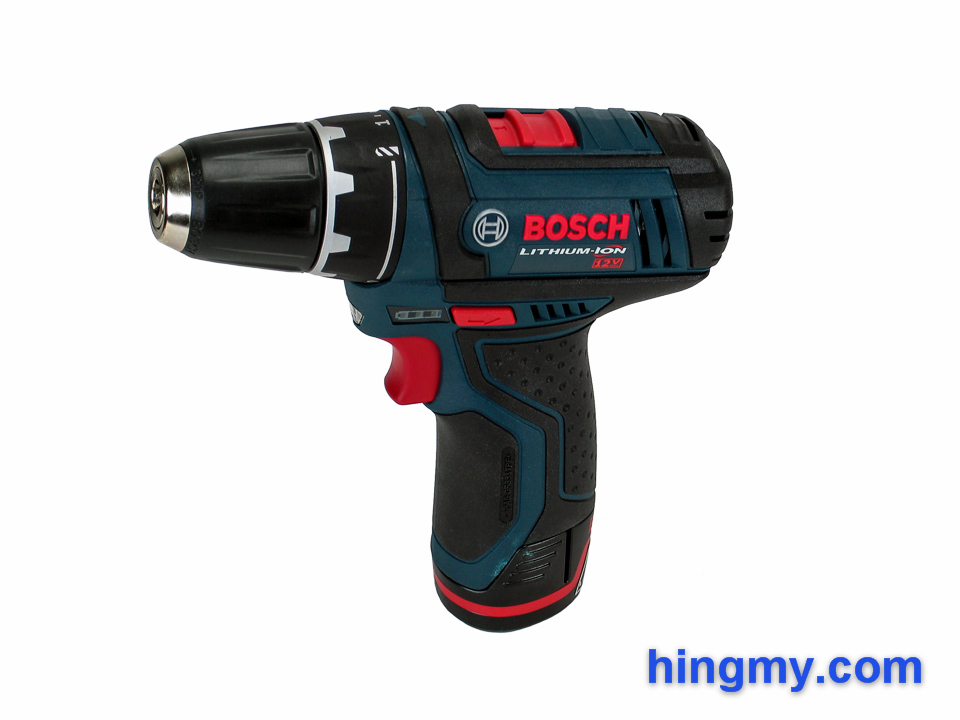 Coming from the otherwise excellent designers at Bosch the PS31 is an uncharacteristically bad design. Equipped with a great clutch it functions well when working with small fasteners and narrow drill bits. Move beyond that workload and the PS31 will start to fight you. Add to that some outright poor components like the abysmal work light and the overheating battery, and I have to wonder what went wrong during the design process.

Ultimately, however, there is no excuse for the amount of chuck runout on the review model. The competition does not have this problem. There simply is no reason to deal with this issue voluntarily. Maybe you'll get lucky and your PS31 comes with a perfectly aligned chuck, but I'd rather not play that game. There are better 12V drills for you to consider. Stay away from this one.