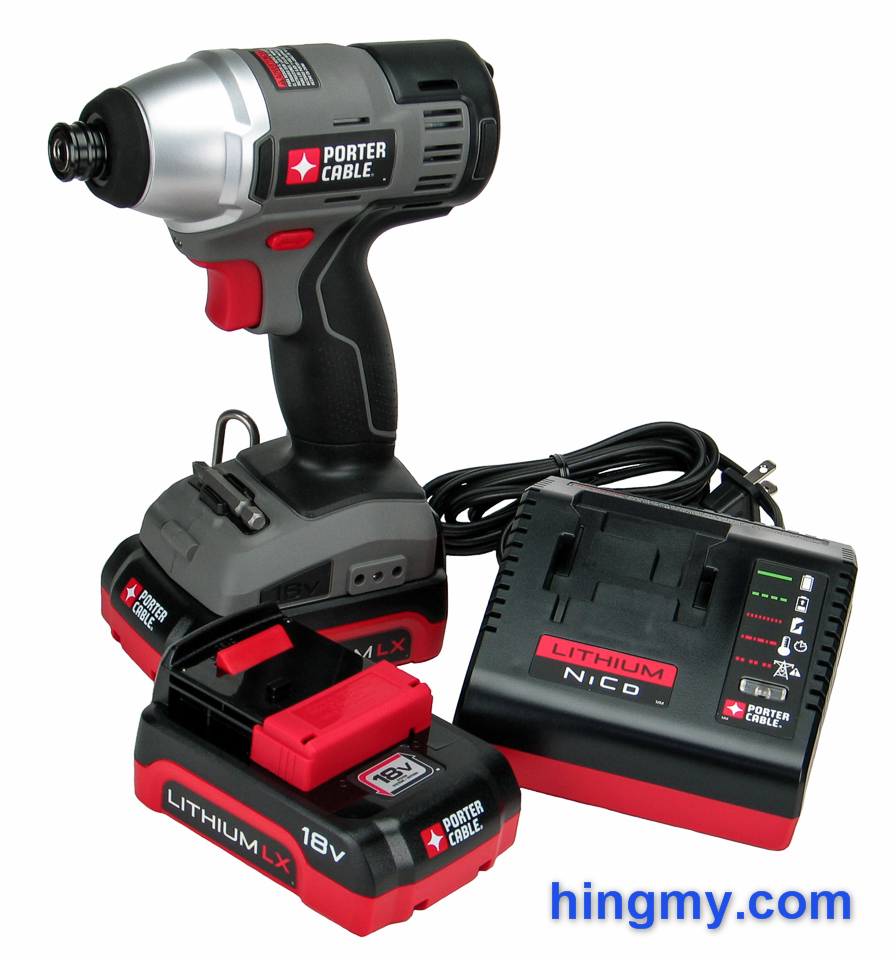 The Hingmy product engine has a habit of highlighting very interesting products within its many views. One of these is the Porter Cable PCL180ID cordless impact driver. It can be found near the top of the cordless driver speed and torque charts. That would not be so remarkable, if the PCL180ID did not come at a low price that does not match its performance numbers. Naturally we had to investigate. Let's take a look if the PCL180ID earned its place near the top of the charts.

The PCL180ID is a full size impact driver from Porter Cable. It is powered by a 1.3Ah Lithium-Ion battery. With the battery installed the driver is fairly heavy. The motor and gear housing pull the center of gravity up above the center point, but overall balance is still within the acceptable range. Installing one of the heavier, larger batteries that fit this tool will change this dynamic somewhat.

Fit and finish is good throughout with one exception. The battery latch feels uncharacteristically cheap on a tool that flirts with being professional grade. Rubber bumpers on all exposed corners protect the driver and the surface is rests on from damage. The flat bottom and sides of the battery are tough enough to be used to tap work pieces into place, which is a common technique used by the trades.

The PCL180ID has some of the best torque and speed numbers among cordless drivers on the market. The speed is immediately apparent when you pull the trigger. At full speed this driver sinks screws faster than almost all other drivers. The driver's torque is a little more elusive. It's definitely there, but it comes on slowly. As the work gets tough the PCL180ID slows down more than the top of the line drivers, but it does not stop.

The trigger is very responsive. A slight change in pressure results in a meaningful and measured change in rotation speed. The drivers minimum speed is well above zero, but not high enough to cause problems when driving fasteners. The rotation direction selector slider has a rough feel to it. While it does settle into position with a noticeable click, it does not always get there in a smooth fashion. 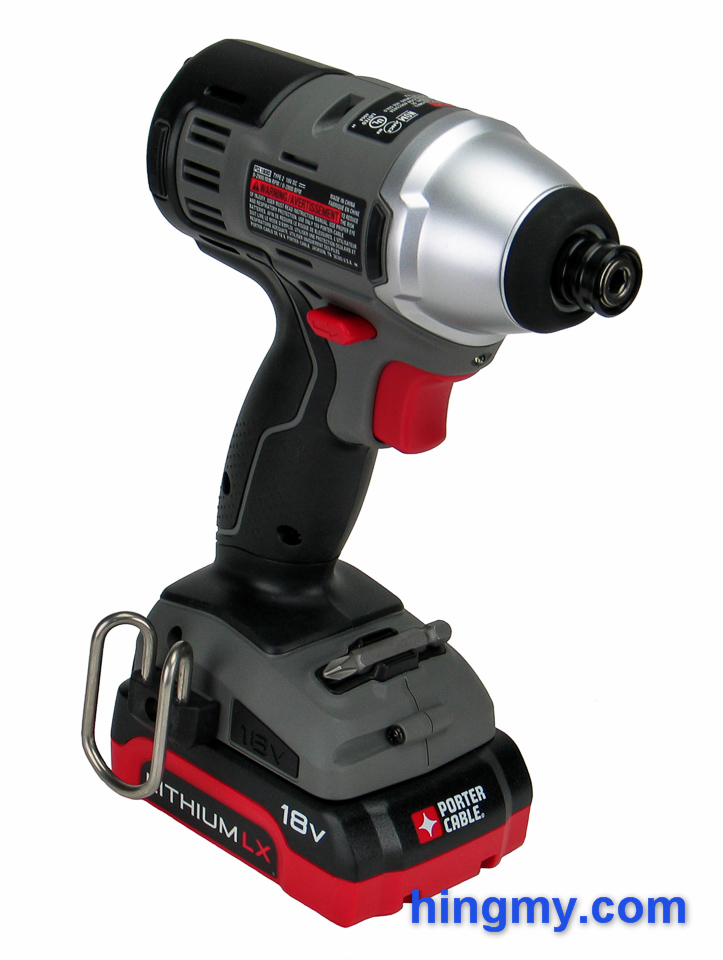 The work light comes on when the trigger is pulled and shuts off when the trigger is released. It's possible to keep the light on without having the chuck turn with very light pressure. The very bright daylight the LED produces is plenty strong enough to light the area right in front of the driver even in complete darkness. The barrel of the tool casts a shadow right over the impact point of the bit as the bit's tip nears the work piece.

The belt hook of the PCL180ID can be installed on both sides. Made from a bent metal rod this belt hook is more sturdy than the stamped metal hooks found on many drivers. It works well, if you install it the right side up. We figured that one out after we took the product pictures.

The PCL180ID's main drawback is it's battery. The lithium-ion unit is well built and gives the driver reasonable endurance, but it only fits on a handful of other Porter-Cable tools. The 18V systems of other manufacturers have upward of 30 tools to choose from. Porter Cable's system is limited. If you go for the PCL180ID, you have to be at peace with the fact that you won't use the batteries in any other power tool. 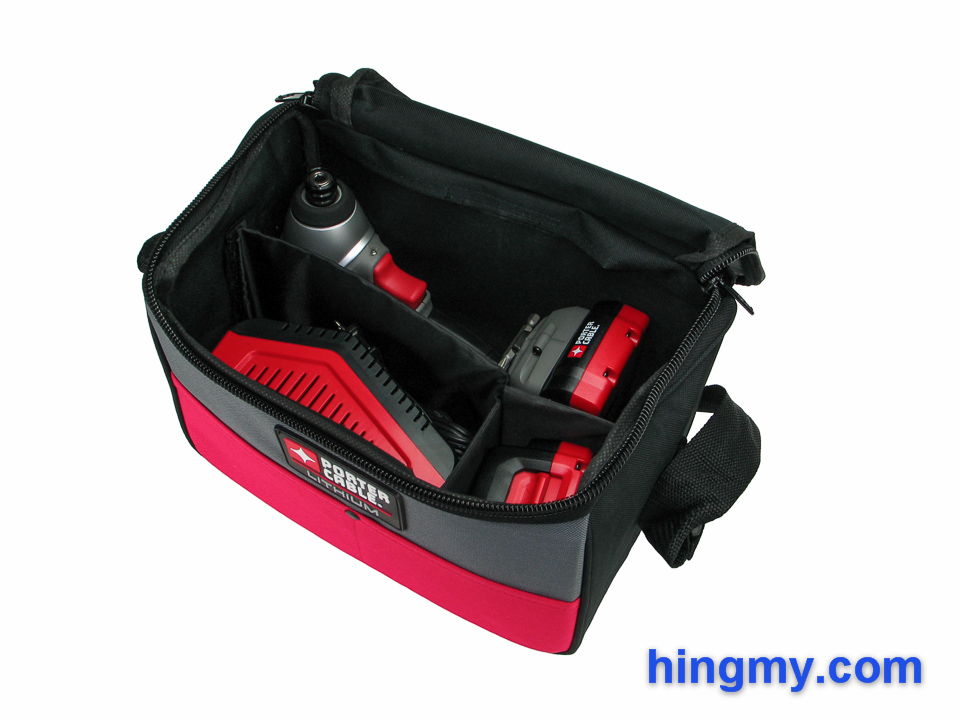 The rapid charger is well designed. It brings a dead battery back to a full charge in about 30 minutes. Clear multi-color LEDs indicate what the charger is doing at any moment in time. The icons for some of the error codes are a little hard to decipher without reading the text printed below them, but all we really care about is that big, bright green light that shows that the charging process is complete.

The fabric bag the PCL180ID comes with is better than most of this type. Interior dividers keep the different components of the kit separate from each other. The outside walls are strong enough to allow the bag to keep its square shape. Staking things on top of the bag is possible. At the end of the day the bag is still a bag. It's utility on a busy job site is questionable.

The PCL180ID is a surprisingly good driver. There is no faster tool for installing small screws that do not require much torque to go in. The bit seems to twist these screws into the wood almost effortlessly. Your only concern is not to overdrive the screws, which can easily happen with such a powerful driver.

The story changes when driving longer fasteners. As friction increases the PCL180ID slows down significantly; more so than other leading drivers. The hammer gear engages and the driver settles into a slow, but stead rhythm as it drives the screw home. It seems that the PCL180ID relies on slow speed to develop the high torque it is capable of. Work still moves along at a good speed, but at the end of the day you'll notice the 10-20% difference in speed between this driver and the market leaders.

Heat is the theme when you try to use the PCL180ID continuously. While driving 3 inch screws in our endurance test, the motor housing and handle of the driver heated up considerably after driving about 30 screws. The handle in particular gets uncomfortably not. If you do not stop, the driver will burn your hand at the base of your thumb where the hand wraps around the handle. It is not clear to us whether the gear housing will survive long, arduous work sessions or not. What is clear, however, is that there are better tools for this type of work than the PCL180ID.

Overall the performance of the PCL180ID is excellent, when you limit yourself to driving only a few fasteners with some down time in between. A woodworker, finish carpenter, or general handyman will find the PCL180ID to be a very capable tool. A construction worker will see the driver's limits on the first day on the job site. Given Porter Cable's aggressive pricing of the PCL180ID, this driver many just be a good tool for many. 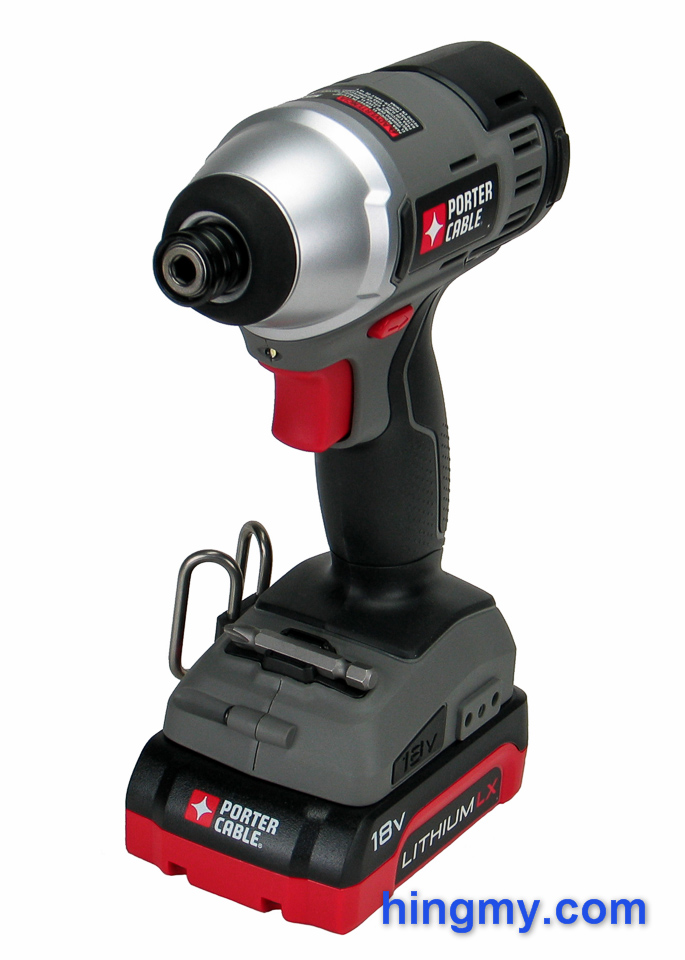 The Porter Cable PCL180ID is a very capable driver. It is able to bring its high speed to bear when driving small to medium size fasteners. The advertised high torque seems to be there, but it comes on only after the driver slows down dramatically. Built well with very few weak spots the PCL180ID certainly is professional quality. The driver heats up too much to be usable for heavy, continuous work.

The main weakness of the PCL180ID is its battery system. There are only a few tools that share the battery with the PCL180ID. The competitive price of the driver, however, still makes it a compelling choice for woodworkers, carpenters, and anyone who drives screws at a measured pace. Given the right circumstances, the PCL180ID can outperform almost anything out there.