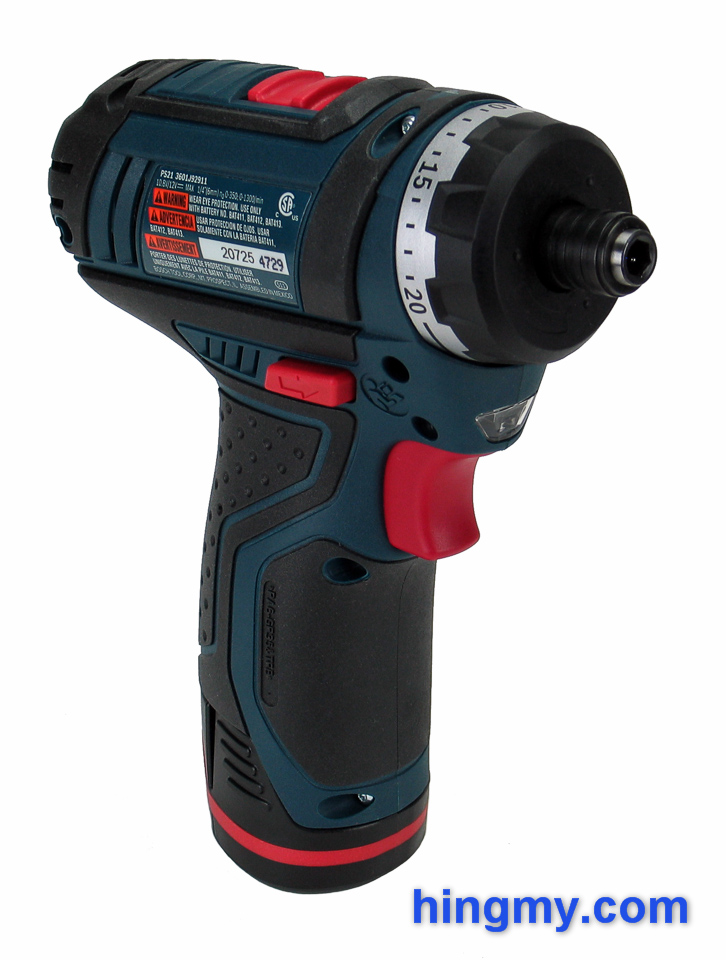 Sometimes it is hard to understand why a company has so many different impact drivers in their lineup. Are they all really that different from each other? This week we are trying to figure out where the PS21 fits into Bosch's cordless impact driver lineup. The driver's prominent clutch ring is a big hint at what lies ahead. Let's take a look at what the PS21 can do in our tests?

It seems that Bosch designed the PS21 to be the ultimate screwdriver for appliance and computer repair men. Every feature of this tool has been matched with this job description. If the task is to drive a few short fasteners to a precise depth, the PS21 is the tool for you. Being small and compact is a great asset the PS21 brings to the job. It boasts both great maneuverability and reasonable performance.

Fit and finish of the tool body is universally good. Rubber dumpers protect the tool no matter which way you put it down. The PS21 is a professional tool made for heavy daily use. With the battery installed the balance of the driver is excellent. The center of gravity sits where is should be; right in the cradle between your thumb and index finger.

The PS21 is a little hard to get a hold of. We got our PS21 as part of the CLPK27-120 kit, which includes the PS41 impact driver. This kit is a particularly good buy, because it pairs the PS21 with a proper impact driver that can be used for the tough jobs where the precision of the PS21 is not needed. 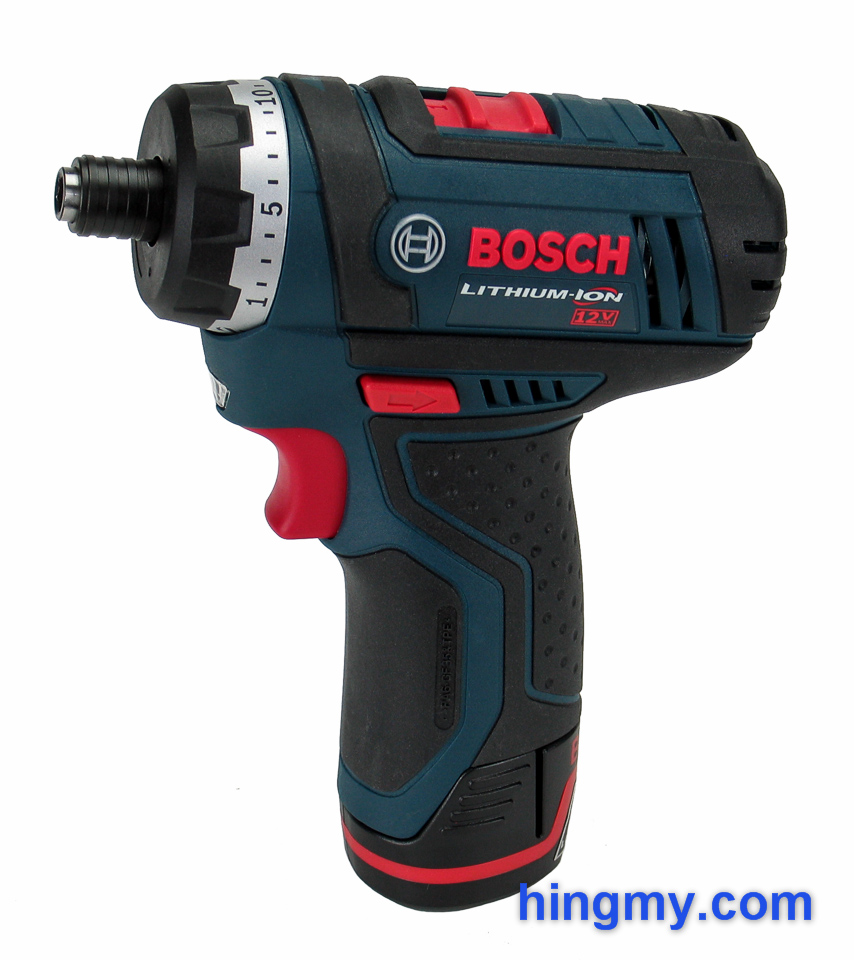 The Clutch and Motor

The 20+1 position clutch defines this tool. If you have no use for the clutch, you have no use for the PS21. The clutch allows the user to precisely dial in the amount of torque required to seat a screw. This is especially useful when seating screws in threaded holes, where excessive torque can lead to stripped or broken off screw heads. Every position of the clutch offers a meaningful and different setting from the one before. The lowest setting is set a bit high for super fine work, but still low enough to cover a wide range of tasks.

The trigger is the second piece of the puzzle. Getting the driver to rotate at a specific speed and hold it takes little effort. The distance the trigger needs to travel before the chuck starts turning is unusually long. This dynamic takes some time getting used to, but it is definitely noticeable at first. The direction selector switch is similarly sloppy. It is easy enough to use, but lacks the consistent tactile feedback that defines the best switches of this kind.

Matching the tool's theme the gearbox offers two speed ranges. The high gear of 0-1,300 rpm is suitable for general fastening and drilling work. The PS21's top speed is far slower than that of the leaders in this category, however. If you are looking for speed and productivity, you should look elsewhere. The lower gear at its very slow speed of 0-350 rpm better defines what the PS21 is all about. At this speed the driver offers excellent control. Feathering the trigger to seat a screw just right is much easier to do at this speed. Unlike the direction selector switch, the gear selector slider is built well. It snaps into place with a satisfying click. 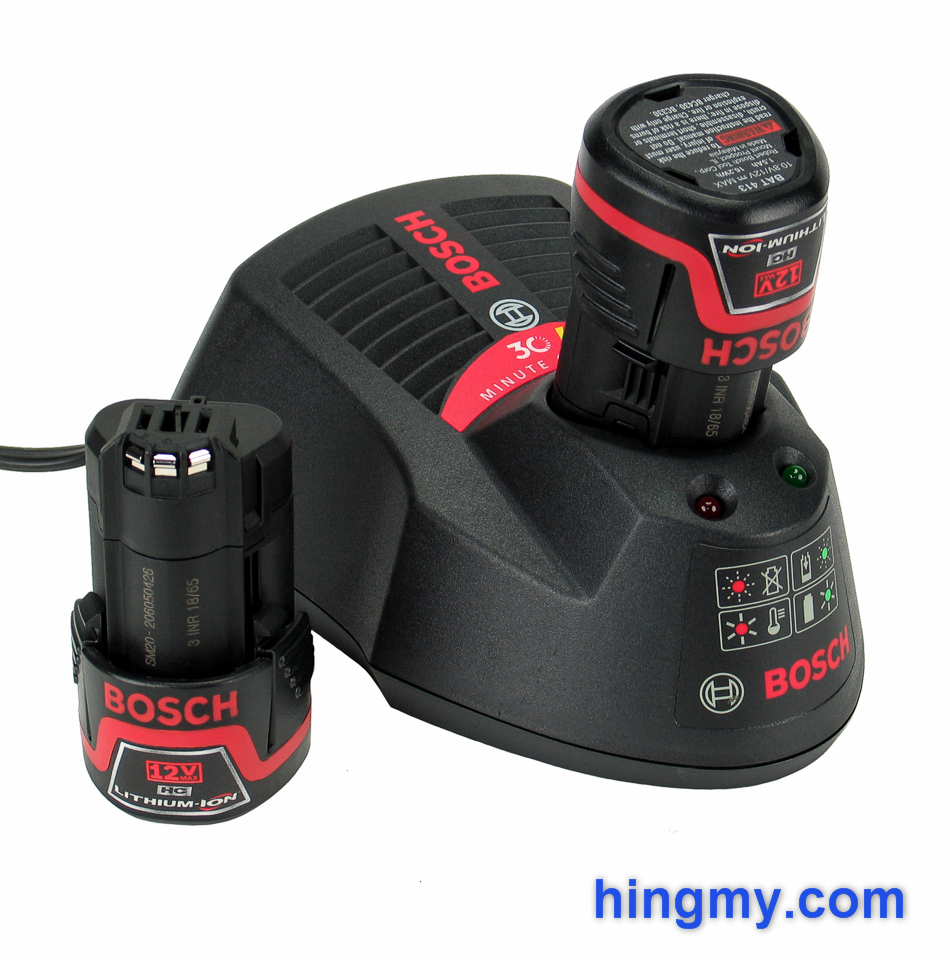 The work light casts the same pattern of shadows that is so typical of tools with an above-the-trigger work light. The barrel of the tool prevents light from reaching the top side of the work area as the driver's tip gets close to seating the fastener. On the PS21 the issue is less pronounced thanks to the short tip of the tool. The design works well, but this entry is certainly not a contender for the best work light.

The light comes on at a very light touch of the trigger, and turns off again as soon as the trigger is released. The light has a yellow tint to it. A plastic lens meant to focus the light does more harm than good. It focuses the light into an irregular pattern with pronounced areas of light and shadow. A power tool should not play a part in a shadow theater performance.

Both the charger and battery of the Bosch 12V battery system are well designed. The charger in particular is better built than most of the competition. It brings a dead battery back to a full charge in under 30 minutes. At 1.5 Ah the battery is on the small side, but it is well matched with the tools in this category.

The main drawback of the system is the limited selection of tools. Since the system is still new, there are only a few tools to choose form. What there is, however, is uniformly excellent. Both the cordless reciprocating saw and cordless multi-tool review well.

The PS21's home turf is driving small fasteners. The 20 setting clutch combined with the slow rotation speed and precise trigger make this tool one of the best for driving screws with precisions. The PS21 is one of the best tools for appliance repair professionals. If the situation calls for a precise amount of relatively low torque, the PS21 will deliver.

As the work gets tougher the PS21 moves out of its comfort zone. The motor produces enough torque to drive 3" screws into a pine stud, but it is clear that the tool is nearing it's limit doing so. If you only need to drive a few of these fasteners, the PS21 will still work well for you. After driving a lot of them, however, you'll want to switch to a bigger, more powerful tool.

As a drill the PS21 performs poorly. It simply does not rotate fast enough for the tool to place anywhere respectable on the cordless drill chart. That's to be expected form a tool that was engineered to be a screwdriver. The hex chuck makes drill bit purchases unnecessarily expensive to boot. If you bring enough patience the PS21 will still finish the job, but those few extra seconds it takes to drill a hole with this tool make for a long workday on the job site.

Endurance is excellent when working with small fasteners. As long as you don't tax the motor too much, the PS21 can work all day long. The relatively small battery will stop you once in a while, but the spare will charge faster than you can drain the one in the driver. Heat becomes an issue when driving long fasteners at a production pace. The PS21 was not made for this task and will let you know about it. The entire tool heats up to let you know that catastrophic failure is probably around the corner. 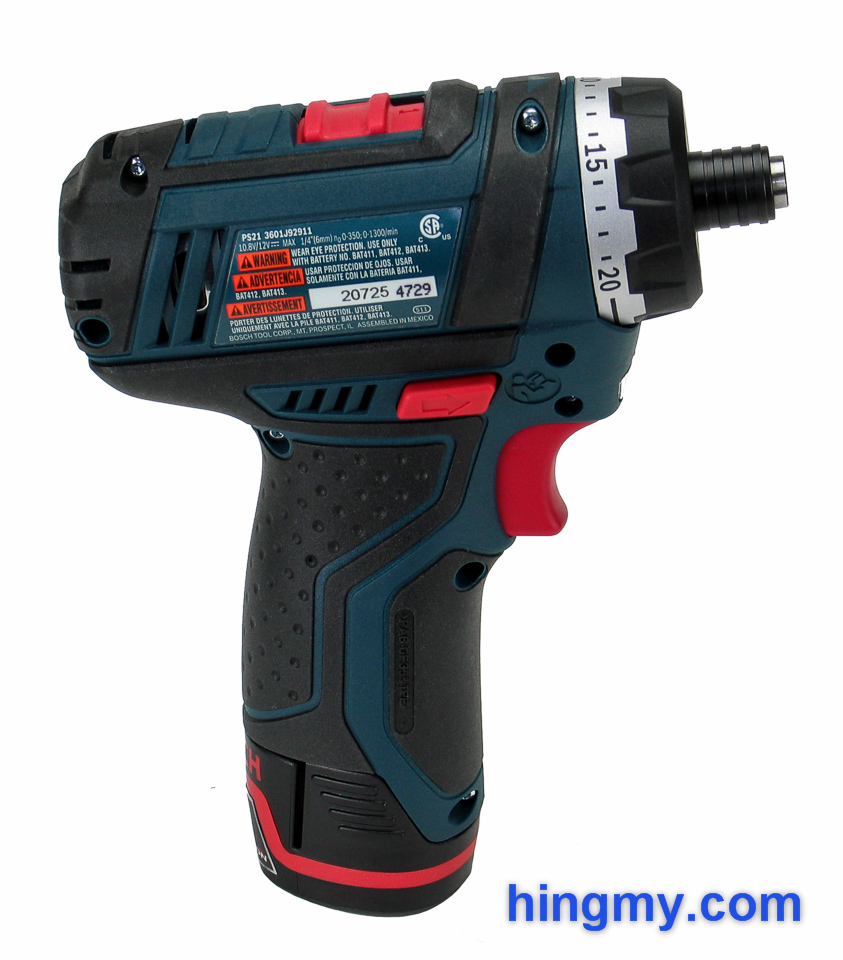 The Bosch PS21 is one of the best screwdrivers you can buy. The small size, excellent clutch, and slow speed of the driver make it a great tool for professionals who work predominantly with short fasteners and pre-drilled holes. Appliance and computer repair professionals should take a look at the PS21.

Unfortunately not everything is good about the PS21. A sloppily executed work light and a lose trigger mar the overall impression. While the driver can sink 3" screws into construction grade lumber, it is clear the PS21 was not made for that task. This driver is a good tool for you, if you are looking for a well built screwdriver that will rarely see general construction work.

In today's market companies get no respect for building a good screwdriver and advertising it as such. Bosch deserve some for the PS21.