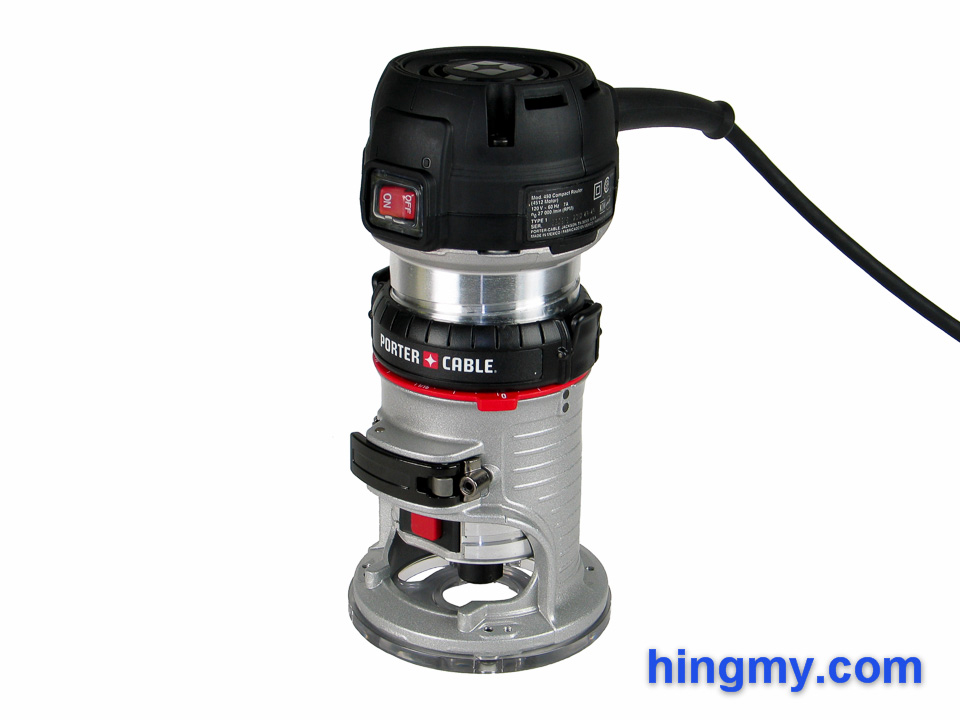 The appetite of our reads for router reviews seems to be insatiable. To make this week's review more interesting, we took a look at a compact router, the Porter Cable 450. Until the term was coined by the company this category did not even exit. Let's take a look at how the Porter-Cable 450 performed in our shop, and if you want to own a compact routers.

Porter-Cable calls the 450 a compact router. It is smaller than a mid size router, but significantly larger than a trim router. The 450 has a removable motor like a full size router, but no handles. All this adds up to a router with a strong motor that wants to be held with a single hand like a trim router. The intention of the engineers seems to have been to create a heavy-duty trim router that can take over some general routing tasks in the shop or on the job site.

Compared to the average trim router, the quality and fit and finish of the 450 is superb. This machine has more in common with a full size router than it has with its smaller brothers. Metal everywhere and not a single lose part. All the adjustments on the router lock securely. This is a tool engineered to last a long time. 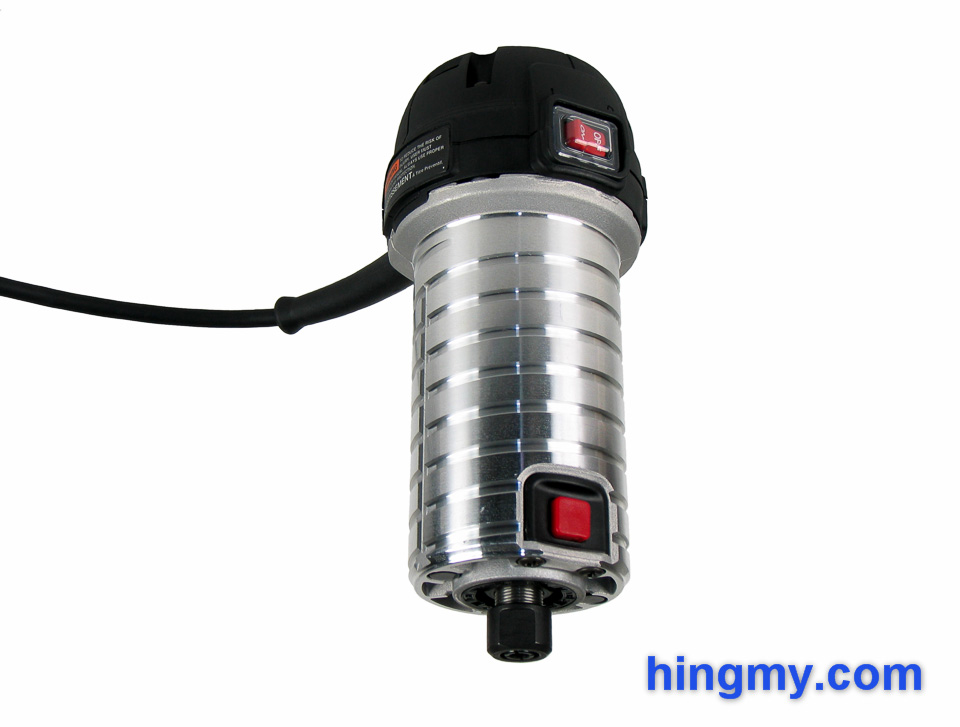 The motor of the 450 is encased in a solid metal shell. It looks and functions like a smaller version of a full size router motor. Quality is excellent. The motor develops a respectable 1 1/4 HP. This is plenty of power for the size of cutter head typically installed in the router.

Unfortunately the motor is a single speed model. The shaft rotates at a constant 27,000rpm. Combined with the high torque of the motor, the fast rotation speed makes the 450 cut aggressively and smoothly. This is particularly noticeable when routing edge profiles.

The power switch at the top of the motor is encased in a clear rubber dust shield. This shows attention to detail by the designers. The motor's soft-start feature works reasonably well. The router does lurch a bit during startup, but much less so than an full size router. A firm grip is enough to start the 450 safely.

A large spindle lock button near the bottom of the motor helps with bit changes. Access to the button and the bit is difficult when the motor is installed in the base. Bit changes are best done with the motor removed from the base. The spindle lock is easy press and hold with one hand, while the other loses the collet with the wrench included in the kit.

The 450 supports only one size of collet, the 1/4" collet. The motor shaft is too small to mount a 1/2" collet in the router even if you have a spare in your shop. The 8' power cord is made from high-quality rubber. It stays flexible and is long enough for most jobs. The large plastic anti-theft device attached to the cord is not something we want to see on our power tools. Why should honest users have to put up with the inconvenience of having to remove a device made to protect retailers? 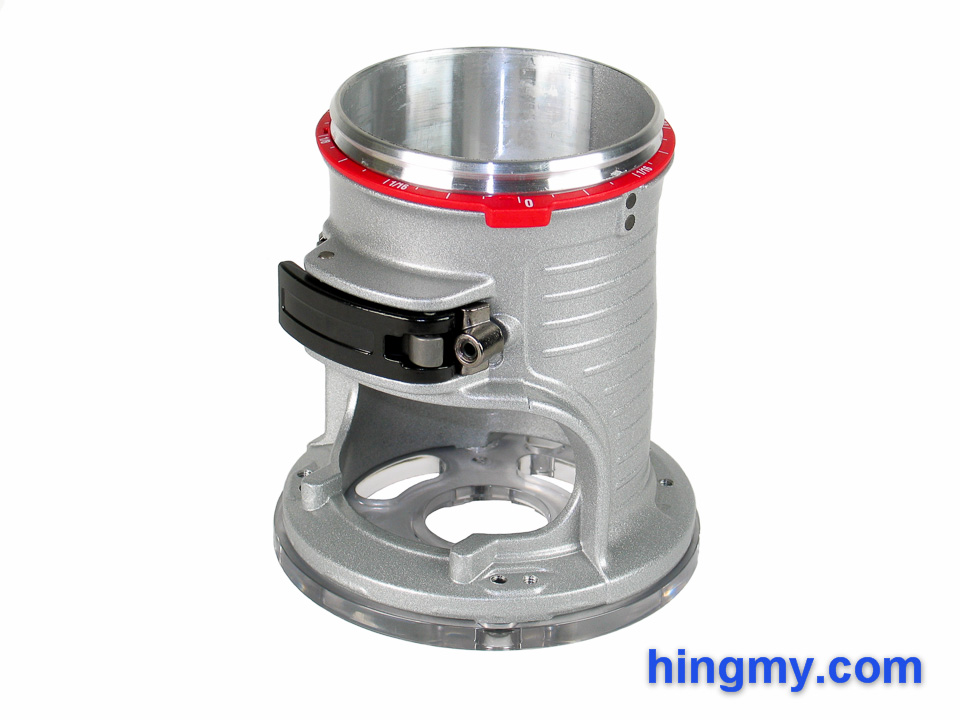 Unlike most trim router, which use a slotted base, the base of the 450 is made from a single piece of metal. This gives the router an unparalleled feel of stability while making cuts.

The the rear of the base acts as the handle of the router. It is grooved for a better grip. The 450 was designed to be held with a single hand. The user's thumb wraps round the base and rests on top of the motor clamp. Due to its size the 450 can be challenging and even dangerous to hold for users with small hands.

The 450 ships with a circular, clear plastic base plate. The plate has cut-outs for dust control. The center hole has groves that accept optional guide bushings. At 1 3/16" the cutter opening is not very large. Porter Cable does not sell a base plate with a larger opening. You'll have to build your own, if you want to run large cutter heads (which is probably a bad idea on such a small router). The kit does not include a base centering tool. 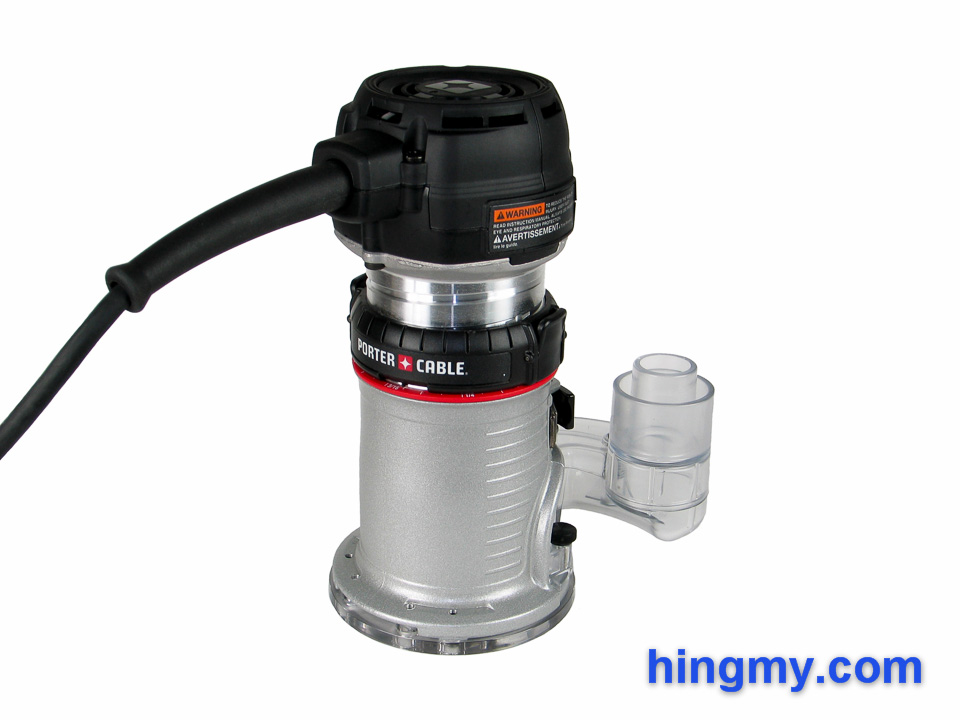 The depth adjustment mechanism uses the single ring system found on many DeWalt and Porter Cable routers. A depth adjustment ring rides in a spiral groove cut into the motor housing. As the ring is turned the motor moves up or down. A full rotation of the ring moves the motor 1/2". Two clips on the ring secure the motor in the base. Unlatching the clips and pulling the motor out of the base can be done with one hand.

A scale built into the base just below the ring indicates the distance the router moves in 1/64" increments. Every 1/16 of an inch is numbered for easy reference. The scale freely rotates to make measurements relative to any reference point possible. Due to the diameter of the base, the scale reads accurately down to 1/128" of an inch. This is the true-micrometer style adjustability DeWalt and Porter Cable routers are known for.

The 450's solid block base adds rigidity to the depth adjustment procedure. When the motor is clamped into place after its depth has been adjusted it does not move like it can on routers with a slotted base. The base does not deform to secure the motor thereby eliminating any potential movement. This makes the depth adjustment feature of the 450 one of the best on the market today. May full size routers do not work as well. We'd like to see this style of motor clamp on the next generation of full size routers.

In it's base configuration the 450 does not have any dust collection. The best thing that can be said about the router in this configuration is that it evacuates all dust through the base plate and does not clog up. The bit spins fast enough to blow all debris clear of the cutting area.

If you want dust collection, you must purchase the optional dust shroud accessory, the Porter Cable 45003 adapter. The shroud install at the front of the router with two thumb screws. It totally encloses the bit above the base plate and adds a dust port for use with a shop vac.

In an attempt not to obscure visibility of the bit, the engineers built the shroud out of clear plastic. Unfortunately their design was only partially successful. The may corners of the adapter reflect enough light to make it hard to see the bit. The setup is perfectly usable for edge routing, but may not offer good enough visibility for inlay work.

With a shop vac attached the router collects almost all dust. Due to it's small size and relatively small cutter the shop vac has an easy time doing its thing. Some dust escapes below the base plate, particularly during cuts that leave the bit exposed. The dust hose makes the router significantly harder to handle, but it can still be guided with just one hand.

The party trick this setup performs is functioning as a trim router with dust collection. Counter top installers or anyone who works in finished spaces that need to be kept clean should take a note of this router. This is where the 450 shines.

A Clone in Yellow

There are not a lot of compact routers on the market. Only the 450 and the Dewalt DWP611 fall into this category. Both routers are remarkably similar. So similar in fact that they may be produced on the same assembly line. It's a possibility considering that DeWalt and Porter Cable are owned by the same parent company (Stanley Black&Decker).

The DWP611 matches the 450 in all specs, and adds two significant features. It has a variable speed motor and LED lights in the base, both of which add value. The 450 has plastic insert where the lights would be on the DWP611. Since both tools are being sold at almost the same price, the DWP611 is the clear superior choice.

The story of the 450 is one of two usage scenarios. The little router can either be used as a trim router, or an everyday mid sized router. The 450 shows promise in both scenarios.

The 450 primarily wants to be used as a trim router. It is better built than any of the proper trim routers on the market. Making cuts with this router does not compare to the unstable furry some trim routers can be. The 450 is more stable, more powerful, and soother. It's bulk can be a negative. If it fits, however, it cuts better than any of the smaller routers.

The dust shroud makes the 450 a great option for finish carpenters and installers. The time it'll save on cleanup will pay for the router in very short order.

On the negative side the Porter Cable 450 lacks a tilt and offset base. These are essential features any trim router should have. If you use these bases a lot in your work, it might not be worth it to carry an extra router to the job site just so you can enjoy the power the 450 offers.

The powerful motor of the 450 allow it to be used for general shop work. Routing edge profiles sometimes gets done faster with the 450 than with a full size router. Agility does count from something. On the job site the 450 can take over most trim work. It saves time by being easier to transport and set up than a full size router.

The 450 reaches its limits when a larger cutter is used or the cutting depth gets deeper. While the tool will merrily cut a deep slot for you, the operation no longer can be considered safe. Making such a cut with only one hand on the router is not advisable. The 450 fixed base kit is not a substitute for a full size router.

Inlay work may be best use for the 450 in a shop. The plunge base included in the 450PK version of the router excels at this. The fine control this compact router offers is just what the task demands. The DeWalt DWP611 with its built-in lights, however, is the clearly superior tool for this task. 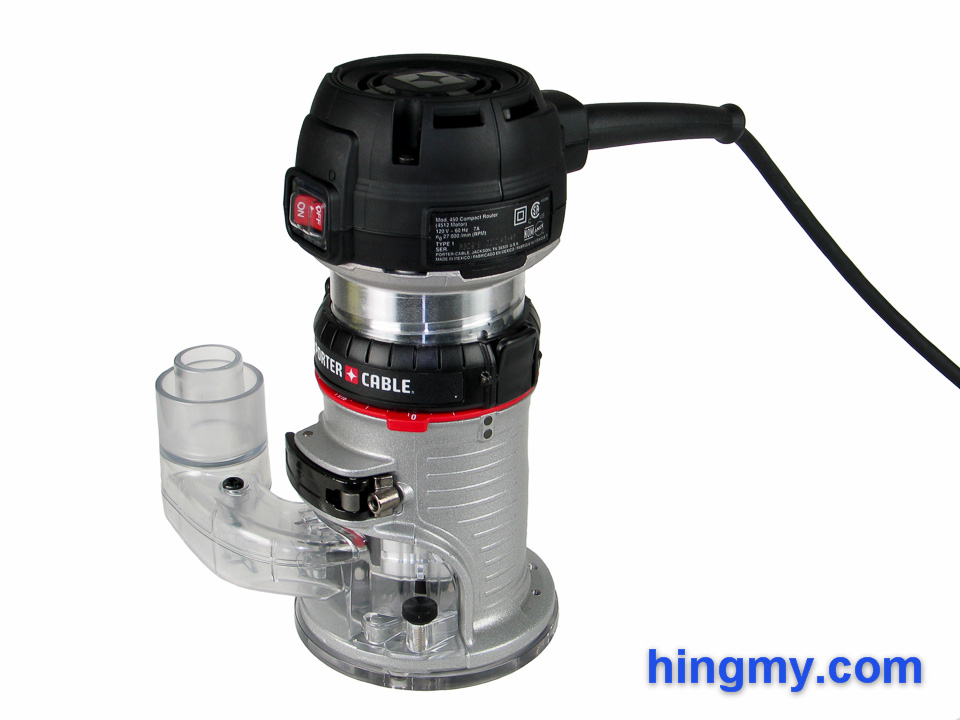 The 450 is a an excellent router with a clearly superior competitor. The form factor of a compact router is a great mix of power and size. Where it fits this router outperforms any trim router. The plunge base version of the 450 may be the best router for inlay work on the market today.

It is not clear to me why Porter-Cable's parent company decided to release such a clearly superior option in the DeWalt DWP611. The DeWalt looks like the 450, performs like the 450, but adds two significant features to the package. At the same price the DeWalt is the clear winner in a battle of two tools that probably came from the same assembly line.

The 450 is a great tool. If you can find it at a significant discount to the DWP611 go for it. If not, the DeWalt DWP611 is the better tool and the one you should take home. This one was decided in a product placement meeting at Stanley Black&Decker.