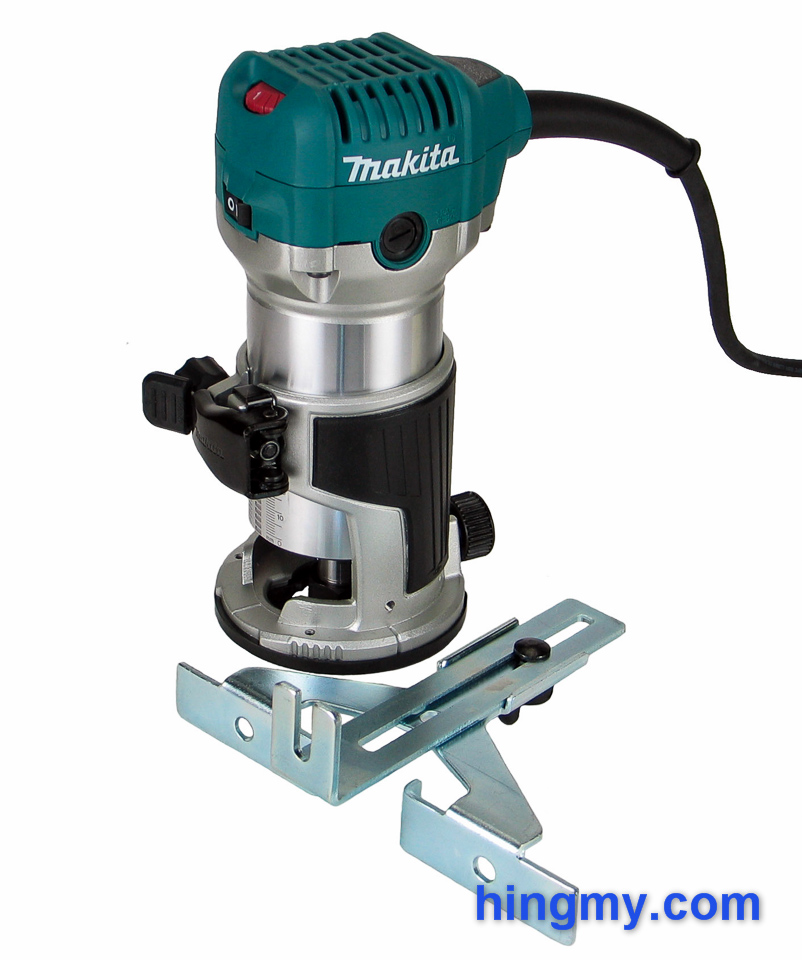 My router collection grew this week with the addition of the Makita RT0701 trim router. It was on my shortlist of challengers for the title of best trim router. Let's take a look at what qualities lifted the RT0701 into the ranks of the best trim routers on the market.

The RT0701 is a trim router from Makita. The basic kit includes a motor unit and fixed base. Additional base options and accessories are available separately or as part of one of the more expensive kits.

Fit and finish of both the base and motor unit are excellent. It's obvious the RT0701 was engineered for professional carpenters and installers. The single piece casing of the motor unit is particularly impressive. There are no lose parts or ill-fitting seams anywhere to be found. With a little care this router will last a long time on the job site. The motor brushes are accessible by removing two plates with a screwdriver.

The motor dropping when the lock lever is opened stands alone as the only significant issue of the RT0701. 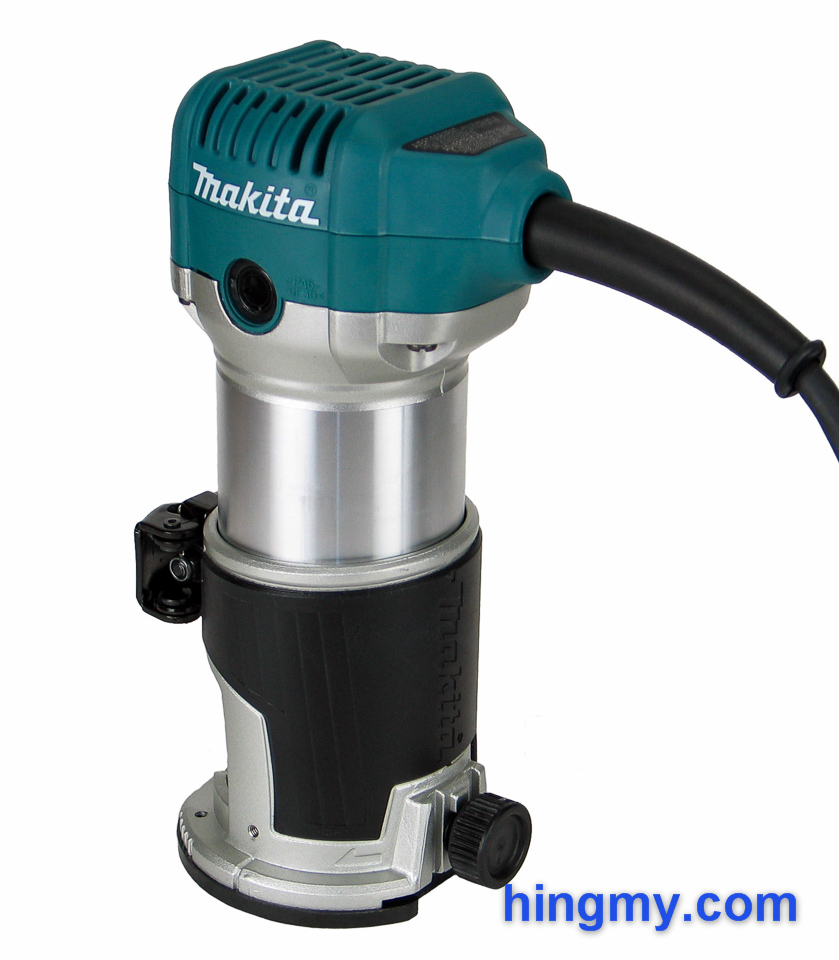 The RT0701 comes with a 6 1/2 amp motor. That's plenty of power to drive any bit that fits into the base plate opening. Continuously variable speed control ranging from 10,000 to 30,000 rpm makes it possible to dial in the optimal speed for any project. The soft-start feature limits startup torque, which is very welcome on a tool held with just one hand.

The power switch feels a little mushy, but works well enough. The speed selector wheel on top of the router moves smoothly. Even fine movements of the wheel translate into meaningful changes in motor speed. Both controls are not shielded from dust.

Bit changes are simplified by a spindle lock. A large red button near the collet locks the spindle. A wrench releases the bit with a quick turn. If you do not like to use the spindle lock and prefer to use a second wrench, Makita included the required wrench in the kit.

The base is cast as a single piece. Split on one side a clamp creates a compression fit between the base and the motor unit. The back side of the base is covered in black rubber. This area functions as the main grip of the router.

The bottom of the base is covered with a circular plastic plate with a 1 1/4" opening. The plate has grooves for mounting guide bushings and overlaps the edge of base all around for precise cuts relative to a fence. Most of the circumference of the plate can be used to register against a fence. Only the thumb screw used to mount the parallel guide gets in the way in some places. 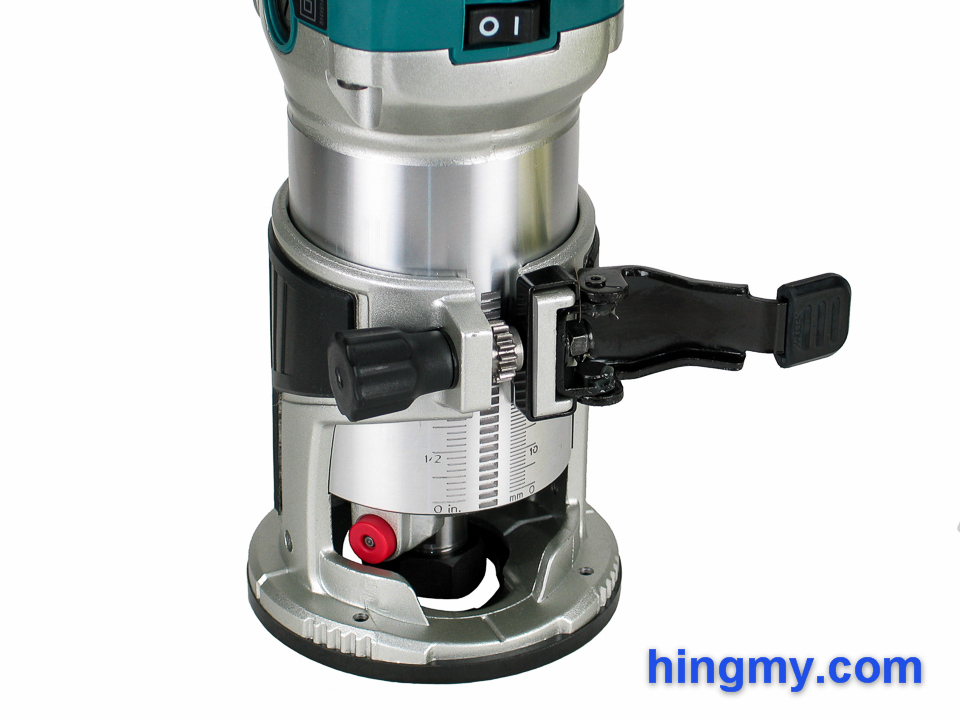 The only adjustment mechanism on the RT0701 is the depth setting. A large black lever on the front face of base releases the compression fit between the base and motor unit. A rack and pinion mechanism driven by a knob moves the motor unit up and down. Once locked down again the bit maintains a perfect perpendicular angle relative to the base plate.

The only flaw in the mechanism is that the motor drops as soon as the lock lever is opened. There is not enough friction between the motor unit and the base to keep the motor in place. This dynamic makes fine depth adjustments harder than they should be. If you are not careful the motor drops and you'll lose the previous position as a reference point.

A scale engraved into the motor unit provides some sense of relative depth. Without a tick mark or a movable pointer, it's up the operator to make sense of it all. Add to that the fact that the range of the scale is only 7/8" and it is easy to see that the scale is more of an afterthought than a well engineered feature.

All versions of the RT0701 come with a metal parallel guide. The guide mounts on the back of the base using a thumb screw. A second thumb screw sets the distance from the center axis to the fence. In this configuration the router can be used to make cuts up to 3 1/2" from the edge of a board.

The fit and finish of the guide is basic, but ultimately good enough. The guide gets the job done, and will last just as long as the router does. 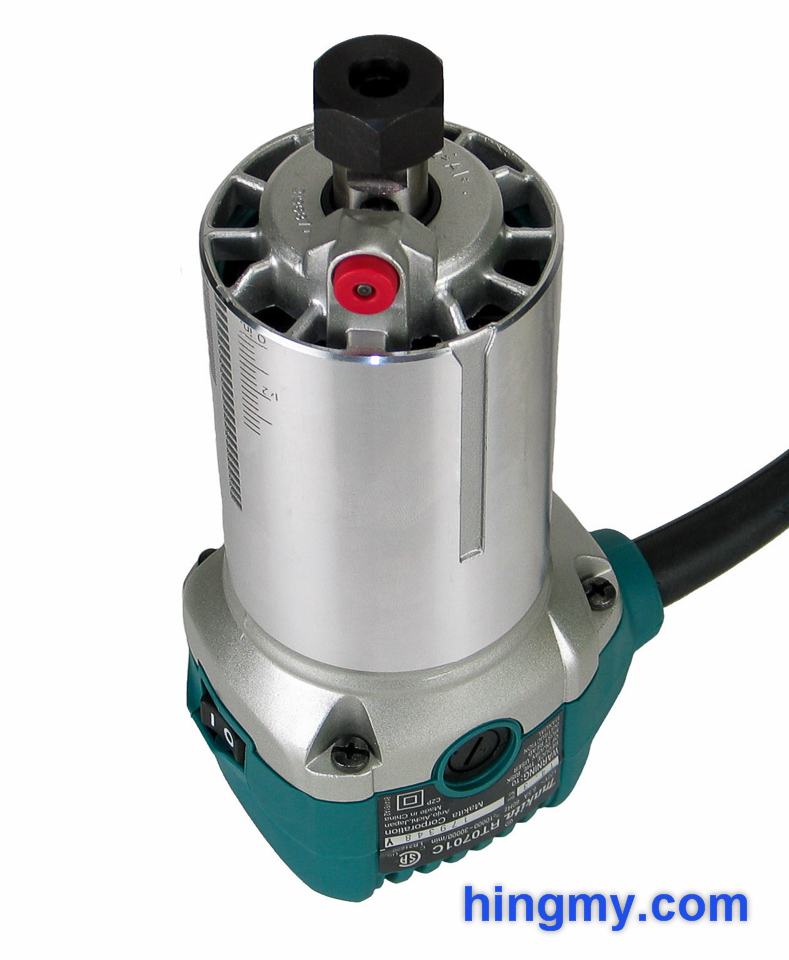 Within the limits of a trim router the RT0701 produces near perfect results. The bit spins in the dead center of the base plate at a perfect perpendicular angle. The motor powers the bit through anything you put it up against at speeds fast enough for production work. Being small and agile the router makes work flow easily and quickly. The resulting edge is as good as the quality of the bit can make it.

The limits of the RT0701 lie where trim routers typically bump into physical limits. When the bit gets too large, the cut too deep, or the feed rate too fast, the router becomes unstable. Making cuts under these conditions is unsafe and should be done with a larger router. Don't purchase this router thinking it is a replacement for a full-size router.

Overloading the router is practically impossible without doing something dangerous and stupid. The motor can drive any bit that fits into the router. The RT0701 showed no signs of slowing down under normal load in our tests. Increasing the feed rate to dangerous levels would eventually tax the motor, but you'd be crazy to work at the speed required to do so.

In the workshop the RT0701 is rated for heavy-duty use. It will make cuts for you all day long, every day of the week, and it'll do it for years. The top of the motor unit gets warm after a while hinting that continuous use may be ill advised. With some down time each hour the RT0701 will survive and perform in any environment.

]In the basic configuration dust collection is non-existent. The motor blows all dust out the bottom of the router with such force that the immediate area around the router is soon covered with a fine layer of dust not unlike the first snow of a coming winter that settles on a sleeping landscape.

The clear plastic dust shroud that is required to hook up a dust collector is not included in the basic kit. You'll have to purchase one of the more expensive versions to get it. With a dust collector attached to the router nearly all dust is collected. Some dust escapes below the base plate, but what little does falls directly to the floor. Long bits make the problem worse.

The already bad sight lines get worse when the dust shroud is attached. Despite being made from clear plastic the shroud almost completely hides the bit from view. Handling of the router suffers from the added weight of the hose. 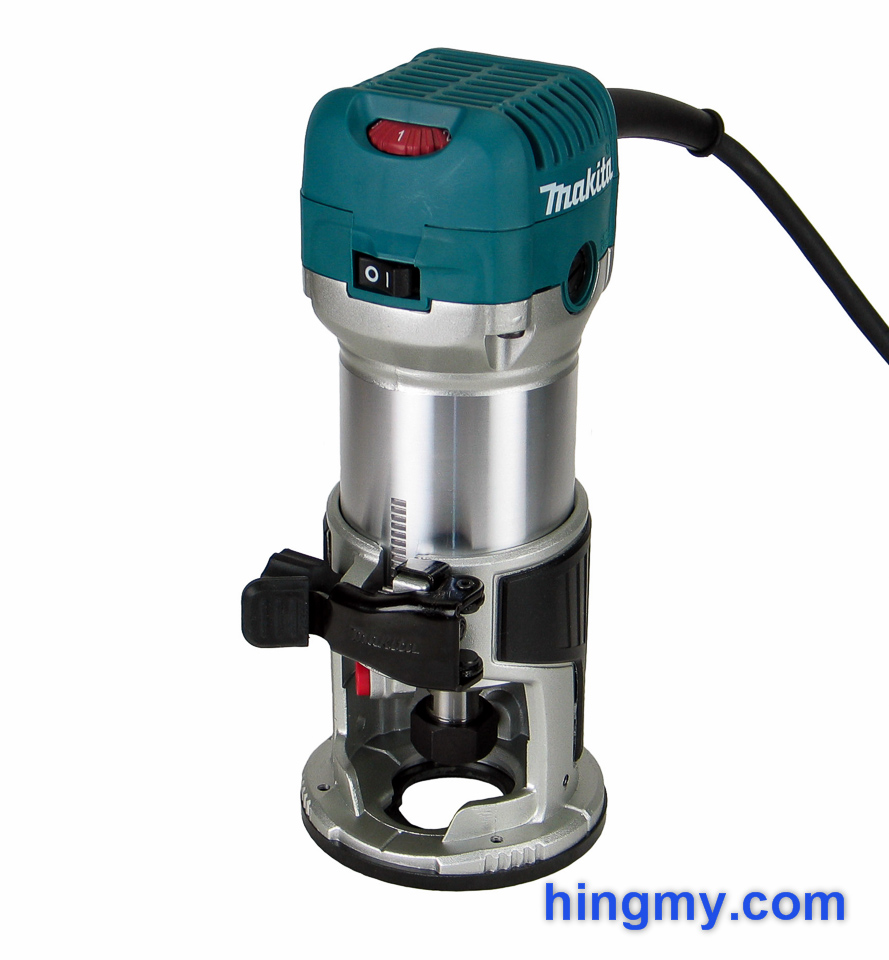 The RT0701 is a very capable trim router. Well built all around this router produces flawless cuts while maintaining thigh tolerances. You can be assured that this router performs well years after its first cut. Its durability makes it a bargain for professionals.

The fact that the motor drops when the lock lever is opened stands alone as a significant issue. A little time and attention overcome this problem, but the RT0701 can no longer be called flawless. Ultimately the RT0701 is a great buy for anyone. Other trim routers can only beat it on price and ease of use.