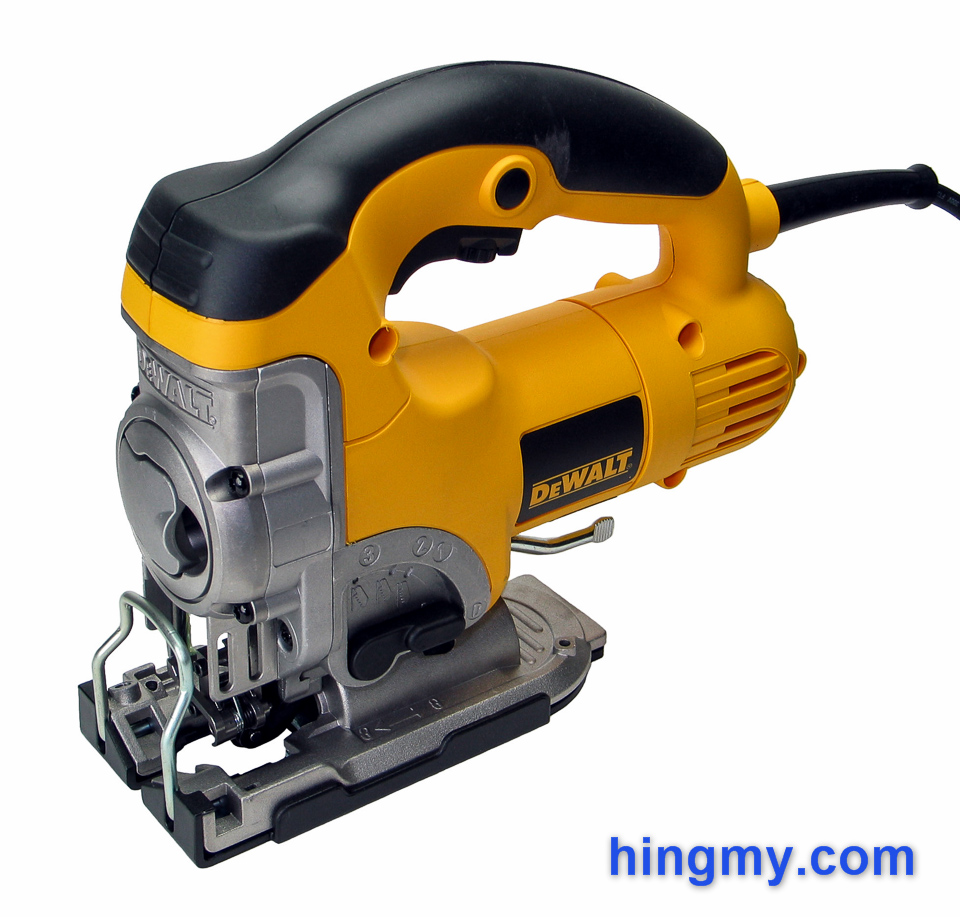 The DeWalt DW331K jigsaw sits right in the middle of the price range. That makes it a tempting purchase for anyone who wants a better saw than one of the universally poor entry level jigsaws, but does not want to pay for the top-of-the-line models. Let's take a look at what the DW331K jigsaw can do in the Hingmy woodshop.

The DW331K is a professional quality jigsaw from DeWalt. It was engineered to perform well on the job site, where speed and durability are valued above anything else. The saw's strongest features are its 6 1/2 amp motor, 3,100 spm cutting speed, and 3 position orbital action. These three combine to make the DW331K the fastest jigsaw I have ever tested in the woodshop

The combo of black rubber, yellow plastic, and silver magnesium typically found on DeWalt's professional quality tools is present here. What's special about this tool is that there is a lot of metal. The entire nose of the jigsaw is made from three pieces of cast magnesium. The plastic parts aren't poorly built either. Every seam is tight, and nothing rattles when the saw is making a cut.

The DW331K's strongest attributes are its power, speed, and durability. Don't expect even a hint of finesse.

The saw is controlled with a precise variable speed trigger. Selecting and holding a specific speed takes little effort. A large range of dead space at the start of the trigger's range unnecessarily limits the trigger's fidelity. A wheel built into the trigger selects the top speed of the saw in situations where the operator does not want to feather the trigger repeatedly. A lock-on button within reach of the user's right thumb locks the trigger in the On position.

The Chuck and Blade Guide

The quick change blade mount of the DW331K works better than it does on most jigsaws. The large metal lever built into the front face of the saw ejects the blade mounted in the chuck with a quick pull. A spring resists this motion and closes the chuck as soon as the user lets go of the lever.

The chuck immobilizes blades very well in the direction of thrust. The blade will not come lose during a cut. What it does do is move lateral. In some situations the blade can move several degrees in either direction. During most cuts the blade will self-center within the chuck, but this level of accuracy makes fine cuts very difficult.

The guide wheel behind the blade is the only horizontal stabilizer on this saw. It keeps the blade plumb on straight cuts, but allows blade drift on curve cuts. Going slow alleviates the problem somewhat, but that can't be a solution in the long run. 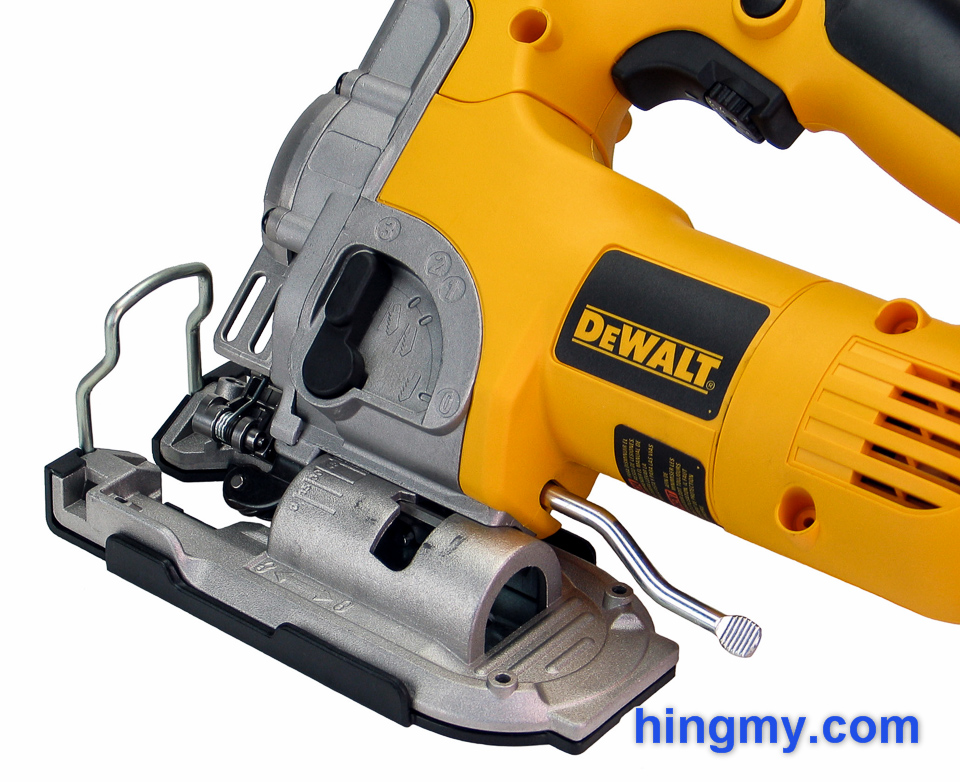 The Base and Bevel Mechanism

A large lever in the rear of the saw unlocks the bevel mechanism of the saw. When the lever is in the open position the base plate is free to rotate 45 degrees in either direction. A crude scale engraved into the plate's hinge shows the tilt angle of the saw. It's accuracy is so low, however, it can barely be used for even construction-level cuts.

The only preset stops are the zero position and the two ends of the scale, which are 45 degrees out of square. Each one has ~1/2 degree of play, which means the base plate can never truly be positioned accurately using the stops.

The base plate moves a little as the lever tightens it against the body of the tool, but becomes perfectly stationary once the mechanism is locked down. The saw can complete a full day of work without the base plate ever going out of alignment. Should that ever change, a single screw tightens the mechanism up again.

If the performance of the chuck and blade guide did not make the case, the lackluster accuracy of the bevel mechanism will. The DW331K is not accurate enough for fine working. Setting it up for accurate cuts is not impossible, but it takes way more time than it should.

A removable plastic non-mar shoe covers the bottom of the plate. It protects delicate surfaces like laminate from the scratches the metal base plate will inevitably leave behind. It does its job very well and can be removed in seconds when it is not needed.

The dust shroud and vacuum port attachment are optinal accessories. At the price the DW331K is going for these two simple pieces of plastic should be part of the kit. Without them your choices are to either deal with the dust where it is being produced, or to turn on the jigsaw's blower and have it blow dust all over the work area.

The best argument for using the blower is running the saw at the cutting station of a framing job. Without the need to minimize indoor dust, the blower is a wonderful tool. It keeps the cut line free of dust at all times. The operator should be wearing a dust mask, but I can't see that happening on a typical framing job. 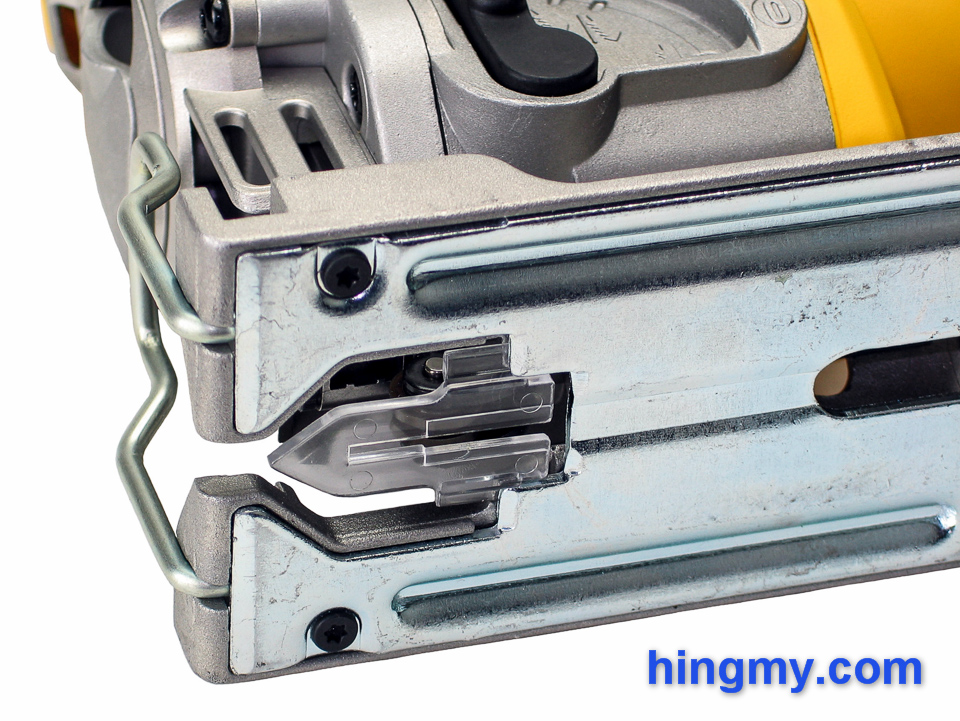 The zero clearance insert DeWalt included in this kit is the worst example of engineering I have seen from the company yet. The insert is supposed to prevent tear out on the blade's upward stroke, an issue that needs to managed on every jigsaw. The problem with this design is that the insert does not securely attach to the base plate. It produces very little down force during the cut, which is essential for it to work properly.

Anyone interested in the DW331K should ignore the zero clearance insert. It simply does not work. For all intended purposes the DW331K does not manage tear out at the top of the table.

As you would expect the DW331K crushes the competition when making rough cuts. The very aggressive orbital action powers the saw through plywood at speeds no other saw we have tested can match. The jigsaw does its work with ease, which hints at a long life on the job.

The price you pay for all this speed is poor cut quality. The blade runs true when cutting in a straight line, but drifts considerably when the saw is cutting a curve. Tearout that top of the cut is horrendous, especially when the orbital action is dialed all the way up. Perfectly plumb cuts are not possible when the saw cuts at speed, but the resulting edges are more than good enough to use on the job site.

Thicker work pieces are not a problem for the motor, but the blade guide gets pushed to its limits. On deep cuts the user must voluntarily slow down, if the cut is supposed to be square. The DW331K clearly prefers cutting sheet goods.

In the woodshop the DW331K gets failing marks. Simply setting the jigsaw up for an accurate cut is so infuriating that the saw's universally poor cut quality and accuracy won't raise your blood pressure any higher. If square cuts are what you are looking for, the DW331K is not the jigsaw for you. 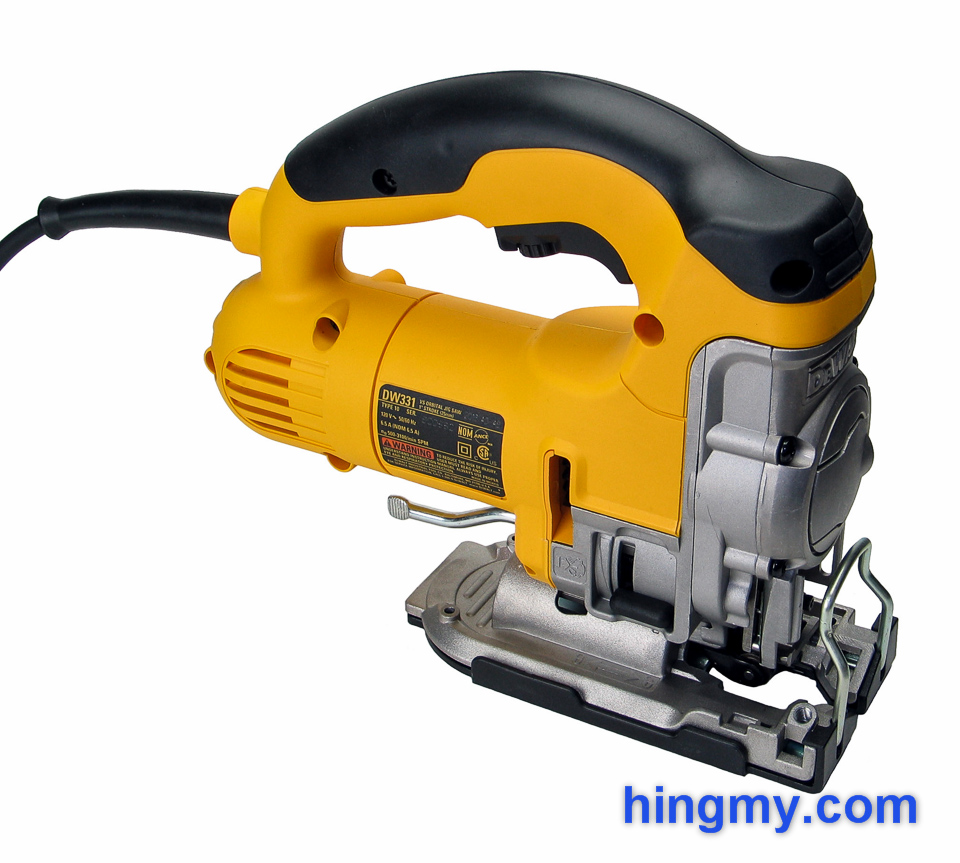 The DW331K is a robust jigsaw that is best used on the job site. The inaccurate chuck, blade guide, and bevel mechanism keep it out of the woodshop altogether. Barely more capable than an entry level saw, the DW331K's best properties are power, speed, and durability. This is a saw that will make crude cuts at production speeds in any environment you'd like it to. Buying the DW331K for any other task is a very poor decision.

I can only recommend this jigsaw to framers, who this saw was clearly designed for. Low volume users can save a good amount of money by going with a good entry level saw like the Bostitch BTE340K. The DW331's cut quality isn't any better, and its durability advantage is not important at low volume. Woodworkers simply need a more accurate jigsaw.