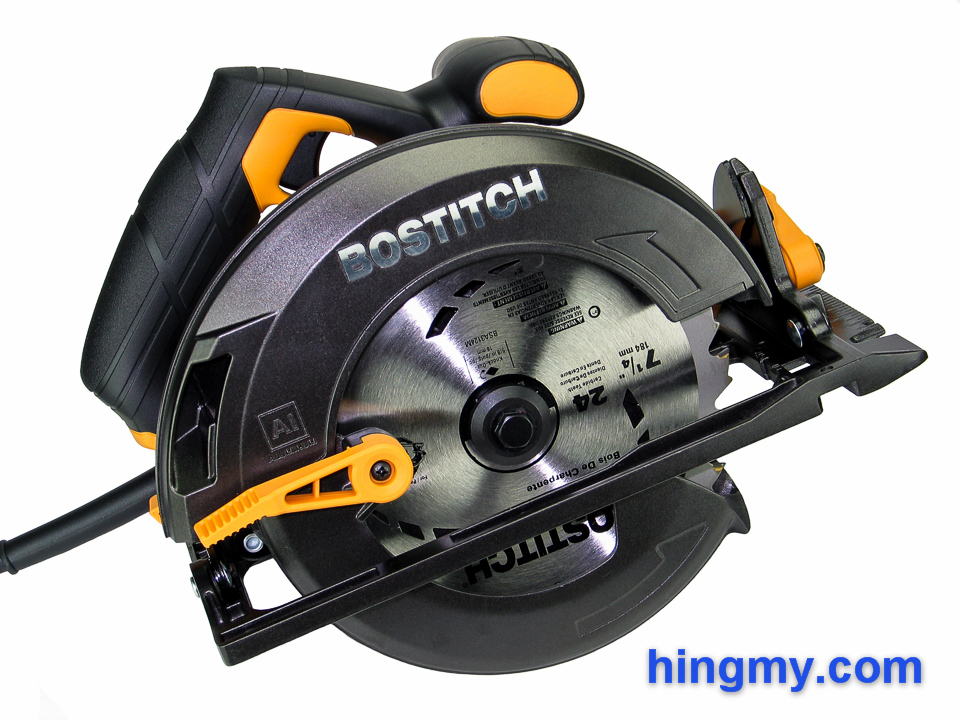 December 2013 marks the introduction of a new power tool line from Bostitch. Not satisfied with their success in the air tool market the company is branching out into the power tool segment.

Drawn to new stuff like moths to a flame we have a number of Bostitch tools on order. The first one to make it into our shop is the BTE300K circular saw. Let's take a look how Bostitch's first flurry into the power tool market turned out.

The Bostitch BTE300K is a professional grade circular saw intended for job site use. The saw does its best work in the hands of framers, roofers, and general contractors. The BTE300K is part of a new power tool line introduced by Bostitch, a company mostly know for making excellent compressors and nailers.

Bostitch is a subsidiary of Stanley Black&Decker, a global conglomerate that, in addition to their namesakes, also owns Porter Cable and DeWalt. Capitalizing on the Bostitch brand equity the new line of power tools is aimed at budget conscious professionals, who demand professional quality, but don't necessarily want to pay top dollar. Supported by the prolific tool foundry at Stanley Black&Decker, these tools are not really first generation products.

As designed the BTE300K is a traditional circular saw with no distinguishing features. There is no laser, work light, or motor brake. Instead the saw tries to do everything well in order to compete. Starting with the cast aluminum blade guards everything about this saw is well built. The grip is cover in black rubber for extra operator comfort, which is not something we typically see. A black motor cover makes field servicing the motor quick and easy.

The excellent forward grip offers good control for both right-handed and left-handed use. Sight lines are great across the entire length of the cut. The control lever of the lower blade guard is within easy reach of the thumb of the hand on the forward grip making it easy to keep the guard out of the way.

The faded orange body of the saw hides a powerful 15 amp motor. Combined with the very good 5,600 rpm rotation speed the motor powers the saw close to the top of our cutting speed tests. Unless you are working at a blinding pace, the BTE300K will be fast enough for you. Few saws do better here. Unfortunately there is no motor brake to slow the blade down after a cut. It takes the blade 5-6 seconds to come to a rest.

The heavily ribbed base plate of the saw goes a long way in defining the quality level of the BTE300K. Sturdy to a fault the plate is unlikely to bend no matter how roughly the saw is handled. Its nice black finish is going to get scratched up in short order, but the plate will not suffer any damage that impacts the way the saw cuts.

All of these scales and marks are accurate on the job site, but useless in the woodshop. The tick marks are simply too wide to achieve a level of accurate below +/-1/16 of an inch. 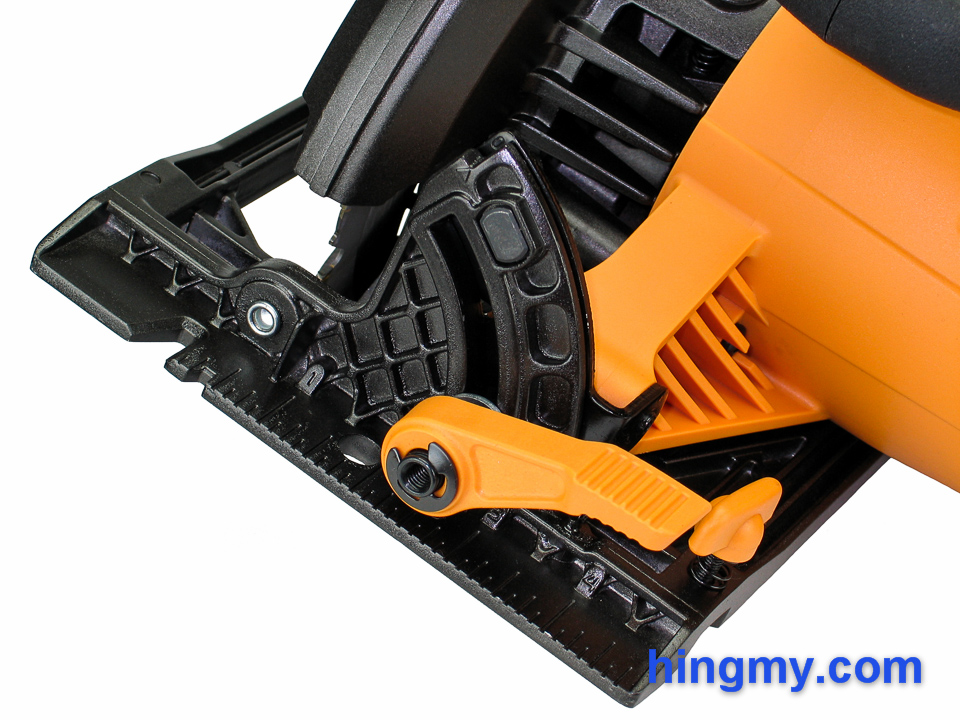 The tilt mechanism appears to be a copy of the excellent mechanism found on DeWalt saws. A sturdy, heavily reinforced angle gauge built into the base plate acts as the front hinge. A lever actuated screw tightens the mechanism down with a quick quarter turn. There is no movement in the mechanism during use.

A small metal pin acts as the zero stop of the scale. If the saw is handled roughly, the pin can break or bend out of place. Careful operators will never have an issue with the mechanism, but this part of saw does not measure up to industrial standards.

Overall the tilt mechanism works very well. Tilting the saw to just about any angle takes under 5 seconds to accomplish. The indents make repeat angle cuts at common angles a breeze. 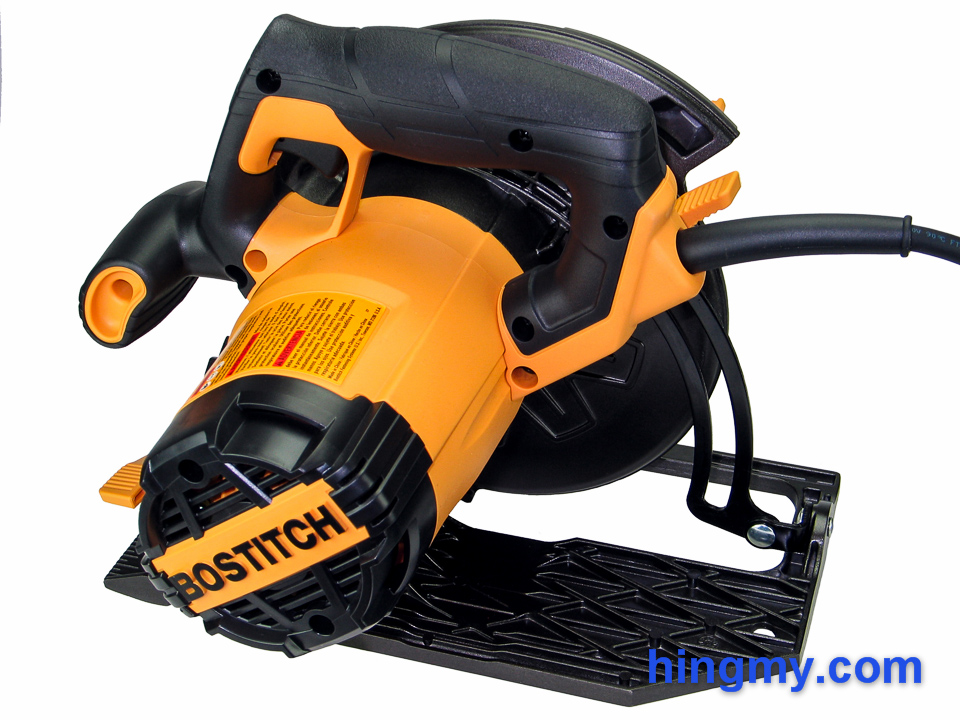 The rear mounting bracket is easily the worst part of this saw. At very shallow cutting depths (when the bracket is extended and at its weakest) there is a lot of side-to-side deflection in the bracket. With care straight and true cuts are still possible, but the issue highlights a possible problem area for the saw as it ages. The mechanism works well through the first half of its range, but is likely to take damage when used regularly close to its full extension.

The depth scale stamped into the upper blade guard can be difficult to read in low light. The black tick mark on the black rear bracket is all but invisible. A light colored permanent marker will fix that issue without having to get upset about it. 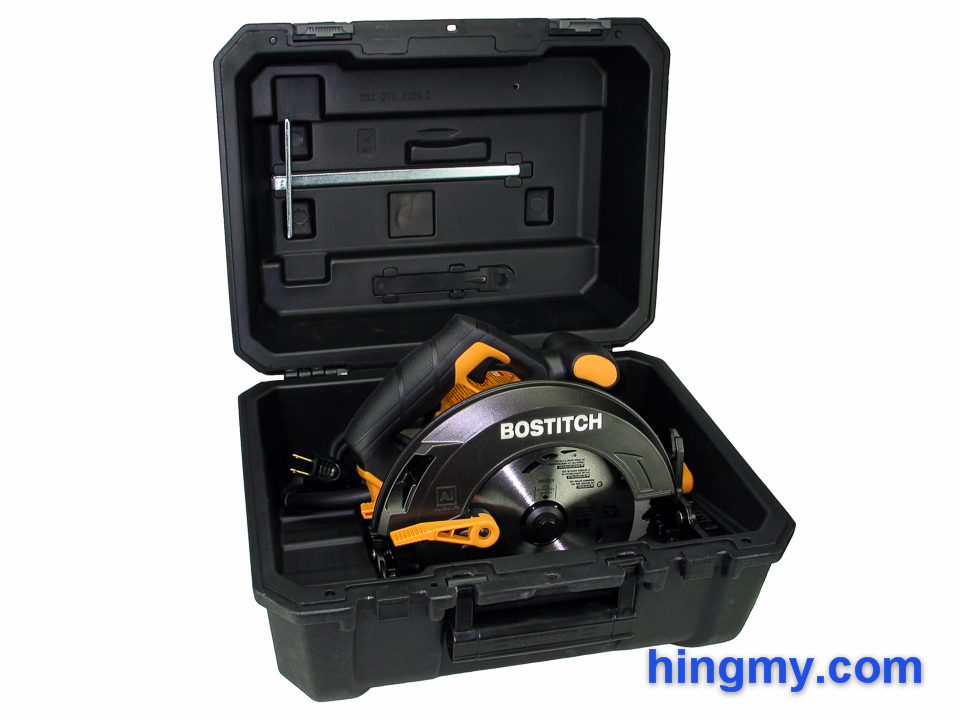 Blade Changes and the Edge Guide

A spindle lock makes blade changes a simple affair on the BTE300K. Located on top of the hosing just behind the upper blade guard the spindle lock button is in the perfect place to be pressed by a finger of the hand holding the saw. The other hand is free to loosen the arbor bolt with the included wrench. The whole operation is hassle-free and takes less than a minute to complete.

The edge guide is a welcome addition to any circular saw kit. This particular model is a very simple, yet functional device. Installed on the saw in seconds, it has an 8" capacity to the left and 4 1/2" to the right of the saw. A little too short and flimsy for fine woodworking, it does its job well on the job site. The guide is a fine addition to the kit a lot of us are actually going to use. Bostitch packed it into the box without charging extra for it.

The BTE300K comes in a sturdy case made of double-walled, vacuum formed plastic. Nearly indestructible and water resistant the case will withstand anything the job site can throw at it. The plastic latches are the weakest part and the most likely to break, but that should not happen for a few years.

The interior has only one big compartment for the saw, power cord, accessories, and saw blades. There is plenty of room to get the saw into the case without trouble. The cord coils loosely around the saw without preventing the case from being closed.

The blade wrench and edge guide fit into vacuum formed recesses in the lid of the case. Strong plastic tabs keep them in place during transportation. Getting the accessories into these recesses is exceedingly tricky due to the very stiff tabs. Once they are in place and locked down the accessories won't move until they are needed again. There is room for extra blades below the saw, but anything stored there is free to move around the case.

At the cutting station the BTE300K handles like a professional saw. Cuts are straight and true. It takes very little effort to get the saw set up and ready for a cut. All the typical job site features required for the task are there. Angle and depth adjustments are accurate and complete in seconds.

Cutting speed is excellent, but falls a little short of the performance of some worm driver saws and the leaders in this category. Nevertheless the saw is easily capable of working at a job site pace. The only thing slowing you down is the missing motor brake. You'll have to wait almost 6 seconds to put the saw down after a cut.

At 9 1/2 lbs the saw is not the best option for working on a roof or scaffolding. Smaller saws are more agile in these situations and will save you time.

The saw produces considerable tearout on top of the cut, but falls in line with other saws that have no work piece supports near the cut. As usual a lower feed rate goes a long away in reducing the amount of tearout. With the right blade the lower edge of the work piece is almost tearout free.

Like almost all circular saws the BTE300K ejects most of the dust it produces through a dust port at the rear of the upper blade guard. Most of the dust is flung away from the saw leaving the cutline visible at all times during the cut. There is no way to attach a dust collector to the saw.

As far as we can tell every component of this saw is well engineered. There is no part on the saw that could break prematurely, even under heavy use. Continuous work at the cutting station of a build is no problem for the BTE300K. Ultimately, however, this saw will still have to stand up to the rigorous of the job site. The team at Bostitch see no problem with this and have given the saw a generous 3 year warranty. 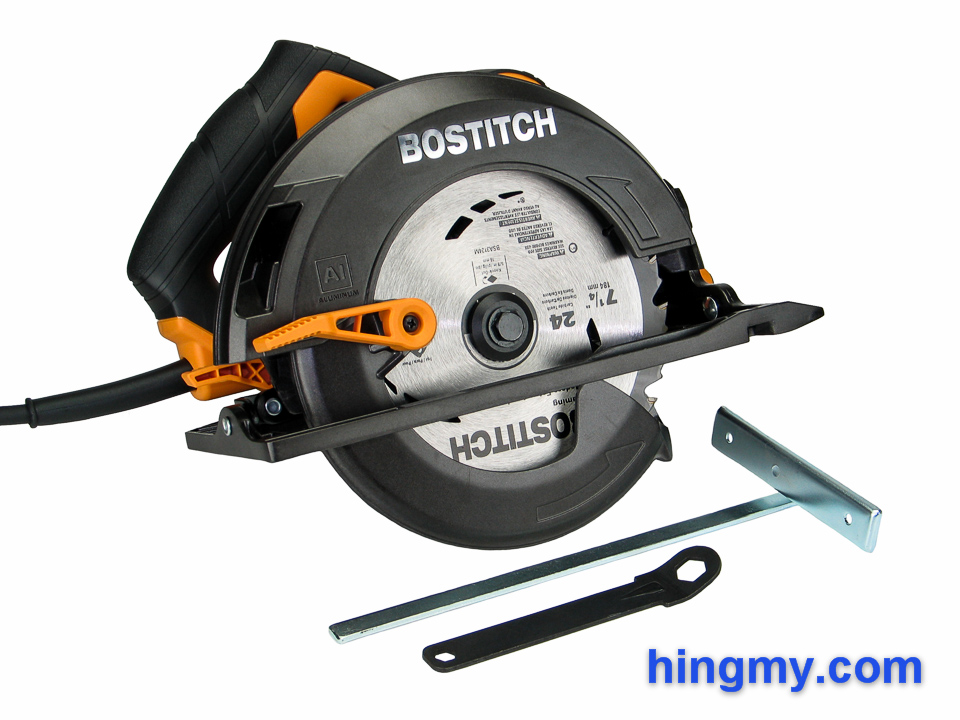 The Bostitch BTE300K is a professional grade circular saw for unconstrained job site use. It has the motor power and speed to keep up with the demands of the job site, and the features required for a hassle-free work day. A heavy-duty cast metal base plate gives the saw a stable footing and establishes a level of reliability that allows the saw to survive a demanding schedule. A great case, fast angle and depth adjustment mechanisms, a great edge guide, and a 3 year warranty underscore the value this saw represents.

The missing motor brake slows work down unnecessarily, and the somewhat weak rear mounting arm casts doubt over the long-term reliability of the depth adjustment mechanism. Bostitch's first circular saw is not good enough to challenge for the top spot in the category, but it is a solid performer on the job site. At its low introductory price the BTE300K is a hidden gem. It's a great saw for all but the most demanding users.