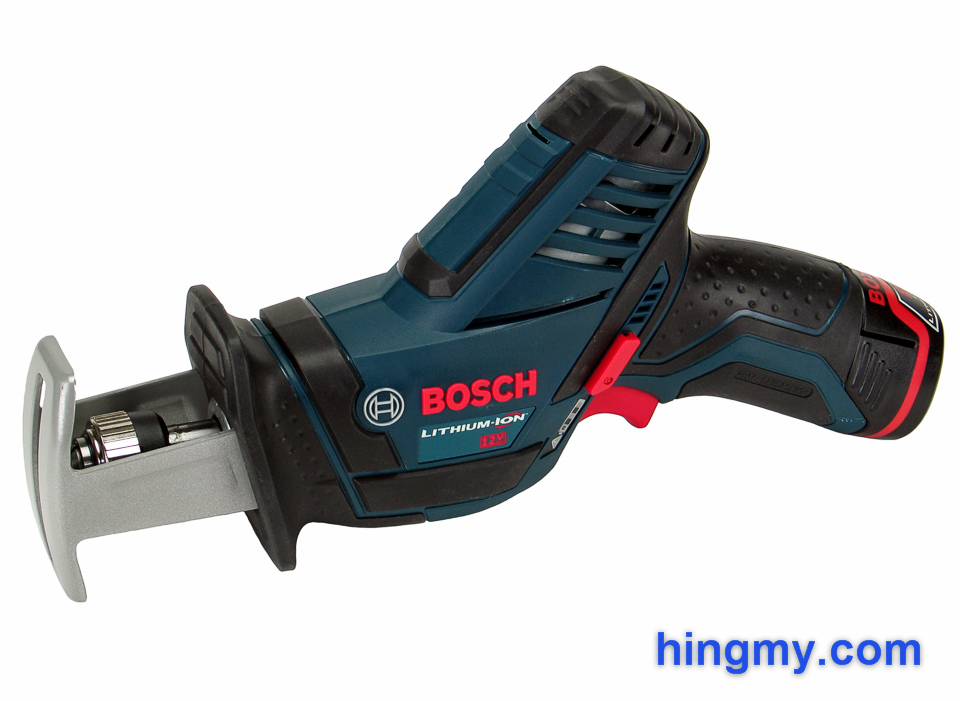 I have a soft spot for small reciprocating saws. These saws are mini-chain saws and come with all the fun of using one. I use my small recip saw to cut up everything I can get my hands on around the house. Naturally I had to order a Bosch PS60-2A to figure out if it is a better version of one of my most used tools. Let's take a look at the PS60 and figure out if it is a wild cat or a kitten.

The PS60 is Bosch's smallest cordless recip saw. It was engineered to be ultra-portable while still producing professional level cuts. The PS60 is meant to be the ideal saw for plumbers, electricians, and anyone who makes only a few cuts at a time.

Like most Bosch tools the PS60 is off to a good start with its excellent built quality. It feels like a hammer in your hands. Rubber covers all the exposed parts of the tool and a good part of the grip. This keeps the saw from damaging its surroundings and limits the damage the saw takes form falls.

The toolless chuck of the PS60 secures the blade adequately, but with the same amount of play that most recip saws suffer from. A metal ring unlocks the chuck with a simple quarter turn. The ring is larger and more durable than that of even full-size saws. It is easy to operate even while wearing gloves.

The trigger is one of the strong points of the PS60. It provides the user with precise control over the entire range of motor speeds. The operator can select and hold a speed level with ease. The slowest speed the saw can operate at lies around 120 spm, which falls in line with other saws. The saw produces very little torque until it reaches the mid point of its rpm range.

The motor brake of the PS60 is a marvel to behold. It seems to stop the blade during the very same stroke the trigger is released. This is a very good safety feature to have, especially if the saw is being used by inexperienced users in a home environment.

A safety switch locks out the trigger during transportation. Besides its obvious use, the only remarkable thing that can be said about the switch is that it is particularly well made. The switch never rattles and is pleasant to use.

The Shoe and the Work Light

The PS60 uses a fixed, stamped metal shoe to support the saw during a cut. The shoe is covered with friction reducing paint the keep the saw from snagging. The stamped metal the shoe is made of is stiffer than one would expect at first glance. Only the strongest could put a bend into the shoe without a hammer. If you take good care of your tools, the shoe will outlast the motor of the saw. The design of the shoe is a good match for such a small saw. The shoe is just large enough to provide support, and it stays out of the way most of the time.

The PS60 comes equipped with a single LED work light located right below the blade. The LED cast brilliant white light through the blade hole in the shoe. Both sides of the blade are illuminated in the cutting area at all times, but the shoe blocks almost all light short of what shine through the blade opening. 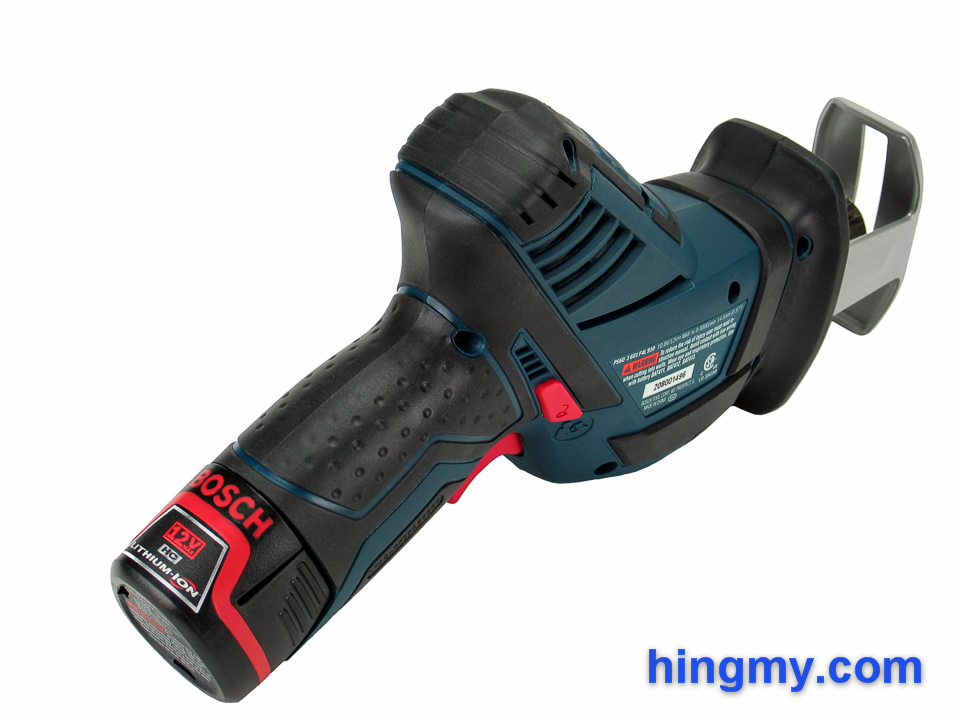 The Battery and the Charger

Being a 12V tool the PS60 uses Bosch's 12V battery and charger. The 1.5Ah Lithium-Ion batteries included in the kit charge rapidly and hold their charge for a long time. It takes about 30 minutes to bring a dead battery back to a full charge. The most important quality of the batteries, however, are their low weight. They are well matched with a tool that depends on its agility to be truly useful.

The rapid charger is well-built and easy to use. Two LEDs with clear pictorial instructions inform the user about what the charger is doing. The charger's housing is made from thick plastic, which is essential to ensure long life on the job site.

Three green LEDs built into the handle of the tool indicate the charge level of the battery. The LEDs illuminate every time the trigger is pulled. Like all indicators of this type, the three LEDs only provide a general idea of where the battery is at. When two LEDs are illuminated, for instance, the battery has already spent half its charge. I have found very few uses for a battery status indicator. It's there and works well, if you think differently.

Compare to the Milwaukee 2420

The PS60-2A is very similar in look and performance to the Milwaukee 2420. We have had both saws in our shop and, as far as we can tell, they perform nearly identically. The 2420 has a slight edge, since it runs a little smoother than the PS60. The real tie breaker is the battery system. Milwaukee's 12V battery system is better developed than Bosch's relatively new 12V lineup.

The PS60-2A is very powerful for its small size, and it lets you know about it. As soon as the trigger is pulled the saw chews through what is brought before it. This saw can cut wood and metal alike. On tougher cuts the blade can bind when too much downward pressure is a applied to the saw. Left to cut at its own speed, stalls are a rare occurrence.

Unfortunately with all that power comes a lot of vibration. At full speed the PS60 punishes your forearm more than similar size saws. Bosch's own PS60 promo video shows the operator's arm shaking as the saw makes cuts. If you make a few dozen cuts a day you can ignore this issue and enjoy the other qualities of this saw. Heavy users should think twice. The Bosch PS60 is a wild cat that will hurt you, if you use it a lot.

For a compact 12V saw the PS60 produces good results on a single cut basis. It's only a few seconds off the pace compared the full size saws. If you only need to complete a few cuts at time, the PS60's small size will get the job done much faster. The saw will complete a demo job, but it'll take several times as long to finish as a full-size demo saw would take.

Thanks to its relatively short stroke length the PS60 is a very precise tool. The blade remains under user control at all time. Making the square cuts that are so important in plumbing is easier to do with the PS60 than it is with a full-size saw. Similarly, thanks to the relatively small distance between the shoe and the blade arm, blade deflection is also relatively small.

Endurance is not one of the strong points of the PS60. When the saw is used continuously the battery drains faster than the charger can bring the spare back up to a full charge. This, among other things, limits the PS60's usefulness as a demo saw. If the saw is being used for the medium duty work is was designed for, a single battery can last an entire day on the job site.

Around the house the PS60 proved itself to be an excellent pruning saw and all propose cutting tool. It's very inviting nature allows novices to just pick the saw up and start cutting. I keep a small recip saw around the house for cutting up bulky items that are too large for the trash can. It seems a surprising amount of use. 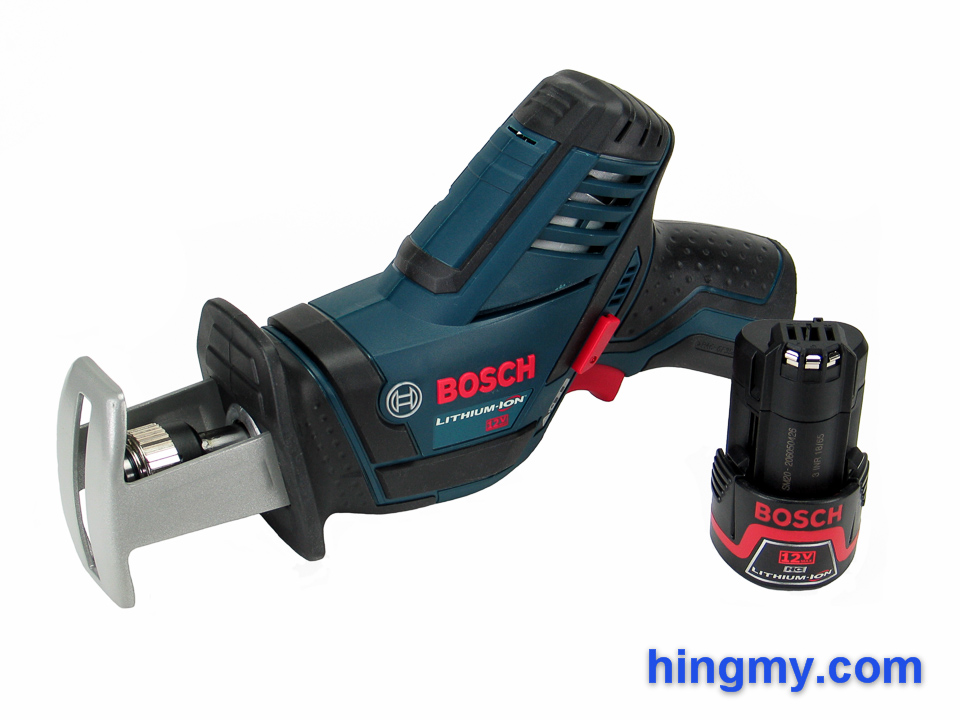 The PS60 is a well-built, small reciprocating saw from Bosch. It completes single cuts at professional speeds, but struggles on demo jobs. Professionals like plumbers and electricians, who only have to make a few cuts at a time, will love the PS60. It beats every other saw in setup time, and completes each cut with precision. Heavy users will find the vibrations produced by the saw bothersome. Home users cannot go wrong with the PS60. It's a great tool to have around the house for pruning and general cutting needs.