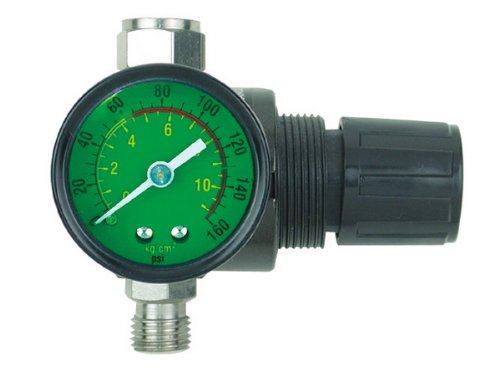 A few months ago I found myself angrily shopping for an inline air regulator. The one that came with my spray gun lasted all but 2 hours. The glass of pressure gauge split in half. Apparently it was too cold in my shop (not really). Browsing the web I found that it is littered with cheap sub-par pressure regulators. I had no confidence that any one of them would last any longer than the one that just broke. Where are the good ones? After some research I settled on the Ampro A1440 pressure regulator, a model, which I believed, was better built than the competition. Let's see if I was right?

The Ampro A1440 comes without air fittings. The user must supply male and female fittings of their choosing. I mounted aluminum fittings from Legacy on mine. If you want to, you can install a swivel fitting to make the regulator easier to use when connected to a tool. I decided against this option, because I dislike working with a regulator attached to my spray gun.

With the fittings installed, the Ampro A1440 is not small. It is, in fact on the upper end of the size scale.

The regulator I received did not come with the green background on the dial. It was white instead. 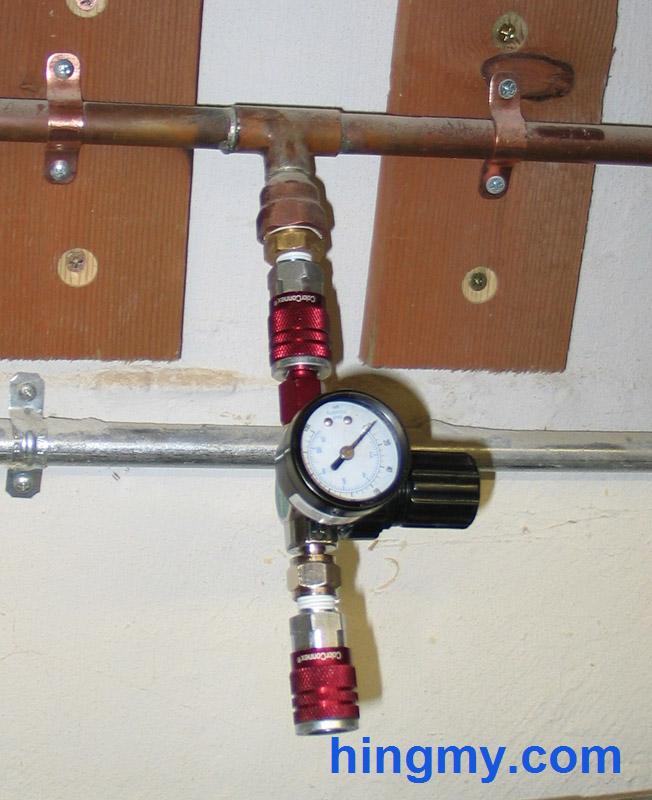 The first thing I noticed when picking up the Ampro A1440 is that there is no plastic in sight. The body, control knob, and pressure gauge are all made from metal. The knob, in particular, is a pleasure to use. I am sure I would take several hammer blows to break it. A single one would not be enough. It outperforms my Ingersoll Rand/ARO in this area.

The Ampro A1440 will not break when dropped. It's a chunk of metal. I'd use it on a jobsite without reservations.

The pressure gauge is screwed into the body. It can be removed and replaced. The body itself has probably an indefinite lifespan if cared for properly. The gauge will be the first and only part that will break. It's great that it is removable.

The downside of all this metal is that the Ampro A1440 is heavy. So heavy in fact that I don't recommend it being used on a spray gun. It will affect your dexterity. I use mine in wide open mode during setup purely as a pressure gauge. I use the regulator on the compressor to dial in the correct pressure on the gun end. Once the test patterns come out right, I remove the regulator and complete the project with the unencumbered gun. If you like to use a regulator on your gun, look for something lighter.

If have no equipment to test the accuracy of the Ampro A1440. It is a true diaphragm regulator, which is the most reliable type available. When plugged in directly after my Ingersoll-Rand/ARO line regulator in wide open mode, the Ampro A1440 displays the exact same pressure levels as the ARO. I think the A1440 is as accurate as any non-scientific pressure regulator will be.

For testing purposes I sprayed latex with the regulator attached to my gun. I set it to bring the line pressure down from 90bar to 20bar for my HVLP gun. The Ampro A1440 created a continuous air stream void of stutters. The spray pattern was perfect. There seems to be no startup spike (the gauge does not jump). Overall performance is excellent. I could not ask for more.

Overall, I am very happy with the Ampro A1440. It does what it is supposed to do, and it won't break easily. I did not really want to buy an air regulator. What I wanted to do is spray latex with my HVLP gun. For that I needed a gun mounted regulator. The air regulator is an unwanted part in all of this. Ideally it's not there. But since I do need it, I want it to perform.

That's exactly what the Ampro A1440 did. It's a no-thrills air regulator. It'll do its job day in and day out. I am confident that I won't be shopping for another one for a very long time. I'll worry about getting a good finish down. And that's good this way.

An air regulator is a simple device. It does not take much to make a good one. Unfortunately these days the industry is producing products that barely work and break easily. Where are the products that just get the job done? The Ampro A1440 pressure regulator is such a product. It's a no-thrills performer that will last for years, if not decades. The Ampro A1440 is good enough for the job site, which makes it plenty good enough for my toolbox.