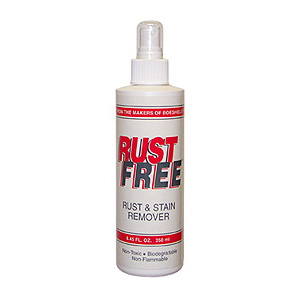 All cast iron, if left unprotected, eventually develops rust. Tools bough from private parties are often covered with it. What are the options to get rid of rust?

1) Use a rust remover

Resist the urge to go after the rust with sand paper. We did not get that far yet. Start with using a rust remover.

I have found that Beoshield Rust Free gets the job done. It works slightly better than CLR. So far Beoshield has worked on all of the rust spots I have tried it on.

Apply the remover to the project, let it sit for a minute, and wipe it off. Spot rust is easy to remove this way.

The spot will still be visible since the cleaner exposes a new layer of metal, which is usually shinier than the rest of your table top. In some cases a second application of the product required. Rubbing helps, but is usually not necessary.

If you must scrub, use a Scotchbrite pad. It is much gentler than steel wool or sand paper. Be warned, it too will leave scratches on the metal if you overdo it.

This chemical is the king of rust removers. It is applied the same way other rust removers are used. It's not the go to solution because it is a toxic chemical and much harder to get off the table again after use. Care must be taken to remove the yellow sludge it creates before it gets a chance to pit the table top.

Don't skip the first step. Navy Jelly is not fun to apply.

If you have exhausted the other two solutions you can start thinking about sanding the rust off. Sanding will inevitable create pits in your table; very shallow ones, but there will be pits none the less.

Start with 120 paper and move through the grits all the way to 400 lubricated with oil or WD-40. Your table top will look as good as new, but it won't be as even as it was when it came from the factory.

For small rust stains steel wool is the better choice. It's easier to use in a constrained space. Like with the sand paper, work your way through the grits.

Sanding on a regular basis is a bad idea. A flat table with a few discolored areas is better than one with pits and valleys.

If you rehab tools for a living, you should think about getting an electrolysis tank. Parts are submerged in the tank and connected to a battery. The other pole of the battery is connect to a sacrificial anode. When a current is applied rust particles will start to fall off.

Typically the sheer effort involved relegates this technique to "rebuild/rehab" scenarios. Nothing, however, will remove the rust as completely as electrolysis. This technique can be used to remove rust from the inside of engine blocks.

Rust removal is process. Start with a rust remover and work your way up to the more invasive processes. It done correctly, rust can be removed without creating pits and scratches. Some discoloration may remain.