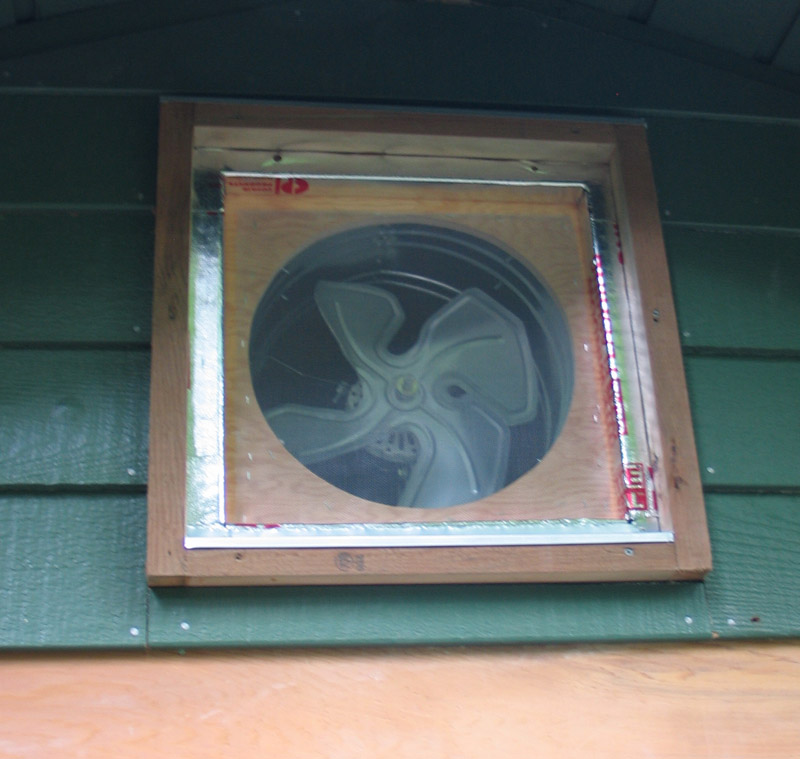 Poor attic ventilation can be the cause of many problems in your home. In my house poor ventilation caused the attic to get very hot in the summer. In the evening the heat trapped in the attic kept the rest of the house warm well into the night. During the dog days of summer it was difficult to sleep. To make matters worse, the moisture trapped in the air caused mold to grow on the underside of the roof sheeting.

The proper fix for this problem would be to install proper ridge venting (passive venting). Active venting (a motorized fan) is only necessary in special situations in a residential setting. Since my roof is at the end of its life, I want to postpone this somewhat invasive operation until I can fix the entire roof in one go. Until then at attic fan will keep the attic nice and cool.

In the Pacific Northwest an attic fan is a decent substitute for air conditioning. While the temperature does climb into the nineties in Seattle, the air cools down fast in the evenings. Temperatures in the 60-70 ranges during the night in the middle of summer are not uncommon. An attic fan is enough to get the attic to the same temperature as the ambient air. That's enough of a change for me. The fan will also keep my mold problem in check until I can get to it.

An attic fan does not cool the air in any way. It just pulls in fresh air from the outside. During the summer an unvented attic space can reach 140 degrees or more. The sun keeps heating the same air for hours until temperatures reach extremes. An attic fan can help your home assume the temperature of the environment much faster than it normally would. Keeping the attic at 90 during the day is better than 140. That's less heat energy stored in the structure of your home.

At night when the sun is down and the air around your home cools, the super-hot air in your attic can act as a heat blanket. Your home will be warmer than the surrounding air until all that heat energy trapped in the attic is dissipated. If the air in the attic is kept at the ambient temperature, there will be less energy to dissipate when the sun sets. You home will become cooler, faster.

Make sure your attic has enough air inlets to feed the fan. For argument purposes, if your attic was sealed tight, the fan would try to pull air from your home. Any little crack between the living space and the attic becomes a potential source of air. That might not sound like much of a problem. It probably isn't, but when your attic fan starts pulling water vapor from your bathroom exhausts, mold will grow. Smoke from fireplaces is another concern. Better avoid these problems and design the system properly. 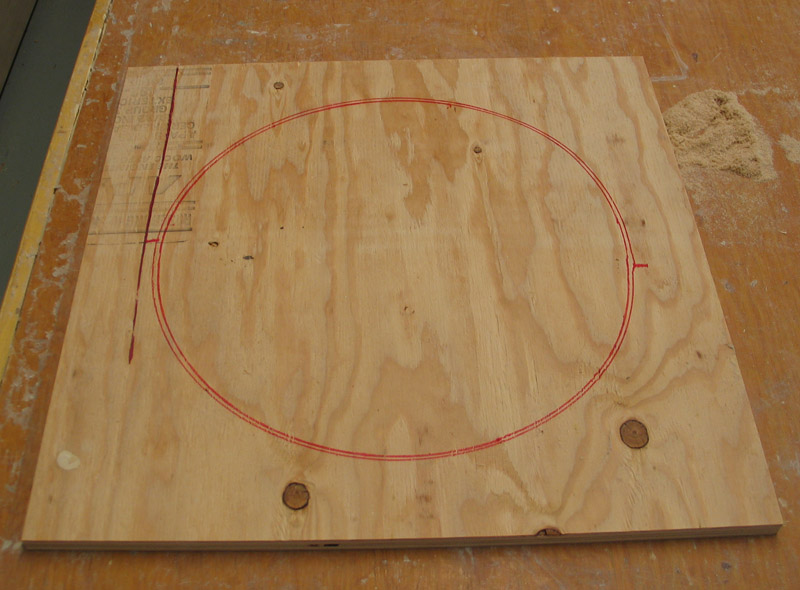 The work begins with building the fan mount. The fan mount is a piece of plywood with an opening for the fan. The mount both channels the air into the fan and supports the fan.

Cut a piece of plywood to be slightly larger than the opening you are framing for the fan in the next step. Position the fan in the center and trace the inside outline of the fan's shroud with a pencil. Cut out the round hole with a jigsaw and mount the fan of the plywood with screws.

It is almost always easier to do this work in the workshop. You can do this, if the resulting assembly fits through the attic door or opening. Take care and measure the size of the fan and the mounting plate. Both have to fit through the attic door. Otherwise you will have to assemble the fan in the attic. 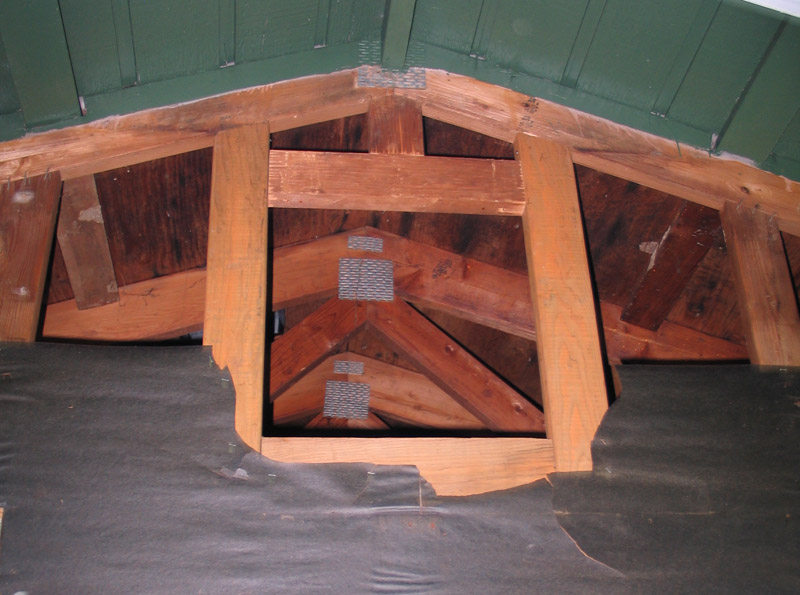 The attic fan must be mounted to a frame made from dimensional lumber, which is commonly made from 2x4s. The frame must be securely connected to other framing members of the roof. The goal is not only to support the fan, but also to eliminate vibrations that can develop from lose joints. A vibrating fan is louder and won't last as long as a properly mounted fan.

In most cases you will have to build the frame in-place. This means that the frame is assembled at its final location one log at a time. Building the entire frame in the workshop will speed things up, but isn't always possible.

Existing framing members of the roof might be in the way. It may be ok to remove these and replace them with the frame. It's impossible to give precise advice on the matter in this post. Every situation is different. The only recommendation I can give you is to use common sense. Add a piece before you take one out.

Outside framing and siding 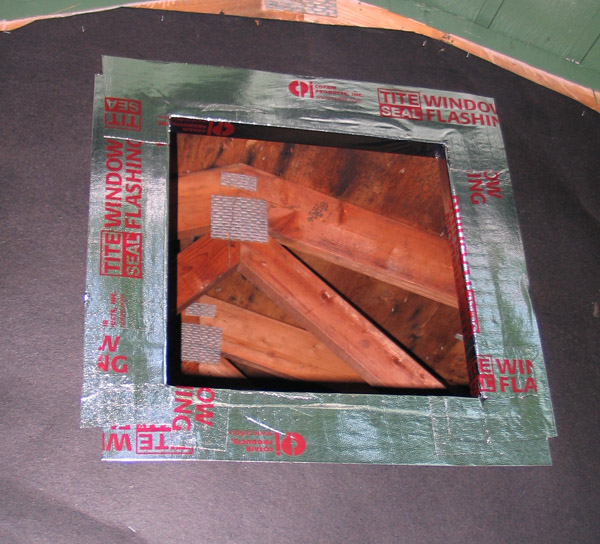 Once the frame is installed, the opening can be cut out. Drill a hole from the inside in each corner of the opening through the sheeting and siding. This marks the corners of the opening on the outside. Cut the siding and sheeting with a circular saw, or a jigsaw. The operation can be simplified by removing the siding. On my home I had to go this route, since there was no sheeting on the gable ends of my attic. It was simpler to just remove the siding and reinstall it later.

Next, the area must be protected from water. Installed house wrap, if it's missing, and apply water proofing tape around the opening. Start at the bottom and work your way up. Overlap the pieces as you go. This part of the procedure is identical to what has to be done when installing a window.

Once the vapor barrier is in place, move on to install a decorative frame of 1x1 pressure treated lumber around the opening. This frame must be slightly larger than the shutters, which themsleves are slightly larger than the opening. If the siding is still in place, it must be cut back to allow for the frame. The frame is held in place by a few screws.

On the top of the frame a piece of metal flashing is installed. This protects the frame and wall from water running down the siding.

At this point the work on the outside is done. Reinstall the siding, apply caulk around the frame and shutters, and paint. 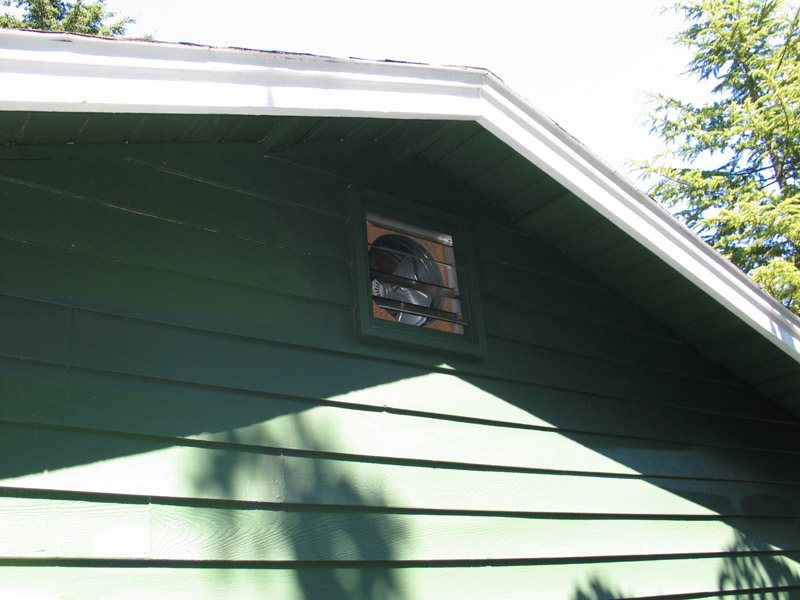 In the attic the fan can now be attached to the frame. Secure the fan mount to the frame with a few screws. It helps to start the screws on the ground while the heavy mount is not dangling in the air.

To operate the fan needs power. Find a suiteable circuit in your attic to tap into and make a connection. An on/off switch near the fan is recommended for thermostat driven fans. The switch makes servicing the area around the fan much safer.

An attic fan can significantly reduce the night time temperatures in your home. On my house with its badly designed roof the fan made a massive difference. The house now noticeably cooler; even during the daytime. If I had AC, the attic fan would make the AC unit work less. Installation of an attic fan is not difficult, but somewhat time consuming. Fixing problem areas like attic ventilation is often a better solution than installing air conditioning.