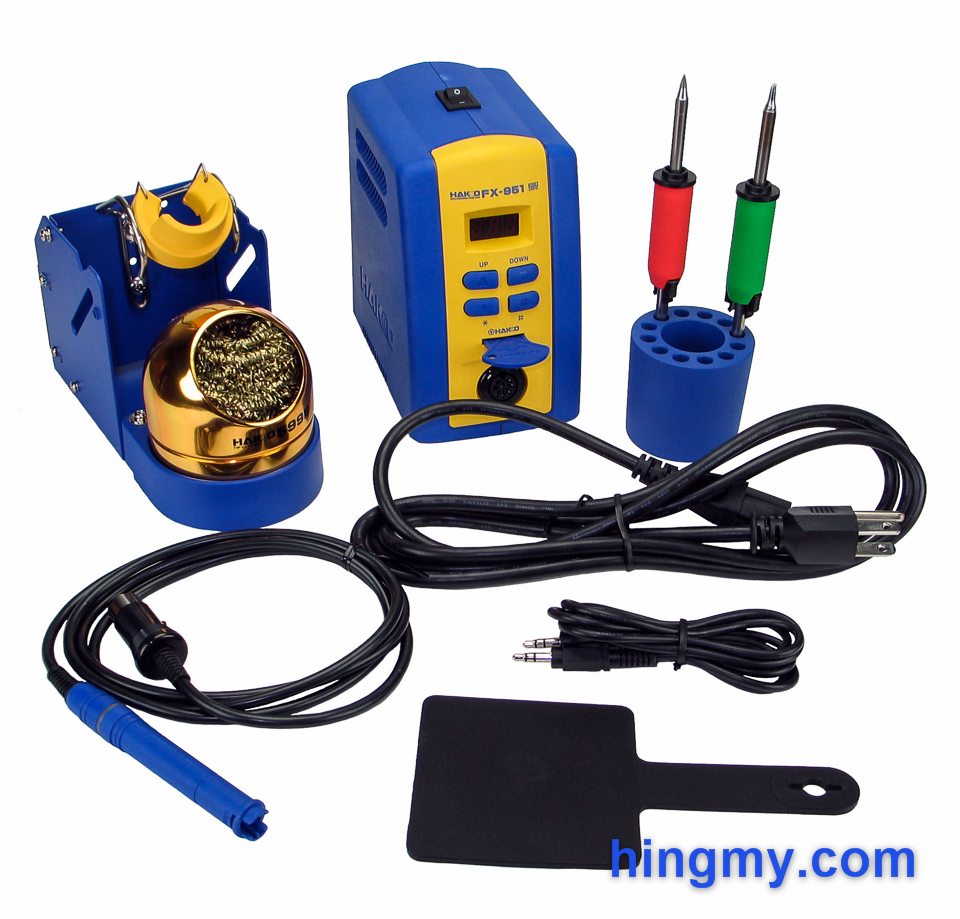 Fixing electronics is a hobby of mine I rarely have time for anymore. A good soldering iron makes the process a lot easier, and satisfies my need to collect gadgets. I chose the Hakko FX-951 soldering station to be center piece of my workbench. It comes with one of the best irons on the market today. Let's take a look how the FX-951 performs, and what makes it special.

The FX-951 is a mid-range soldering station from Hakko. Covered by a yellow and blue plastic body, this soldering station comes with the excellent FM-2027 iron, a soldering iron of much higher quality than the mid-level price tag of the tool might suggest.

Build quality is excellent, as we have come to expect from Hakko. The transformer, the heart of the soldering station, has the size and weight needed to perform up to spec. The station is ESD safe and can be used continuously without taking breaks throughout the day. With proper care the transformer unit will last for decades. The iron and tips wear considerably faster.

The FX-951 is a mid-range soldering station with a professional quality iron.

The iron holder that comes with the kit is made out of painted metal. A yellow ceramic insert secures the iron without the possibility of anything melting or catching fire. A switch built into the holder puts the soldering station into sleep mode when the iron is positioned in the cradle. This reduces energy consumption and improves tip life at the expense of having to wait for the iron to heat up after taking a break.

Instead of a wet sponge Hakko chose to include a wire mesh based tip cleaner with the unit. The mesh cleaner performs just as well as the wet sponge without exposing the tip to the thermal shock caused by the water in the sponge. 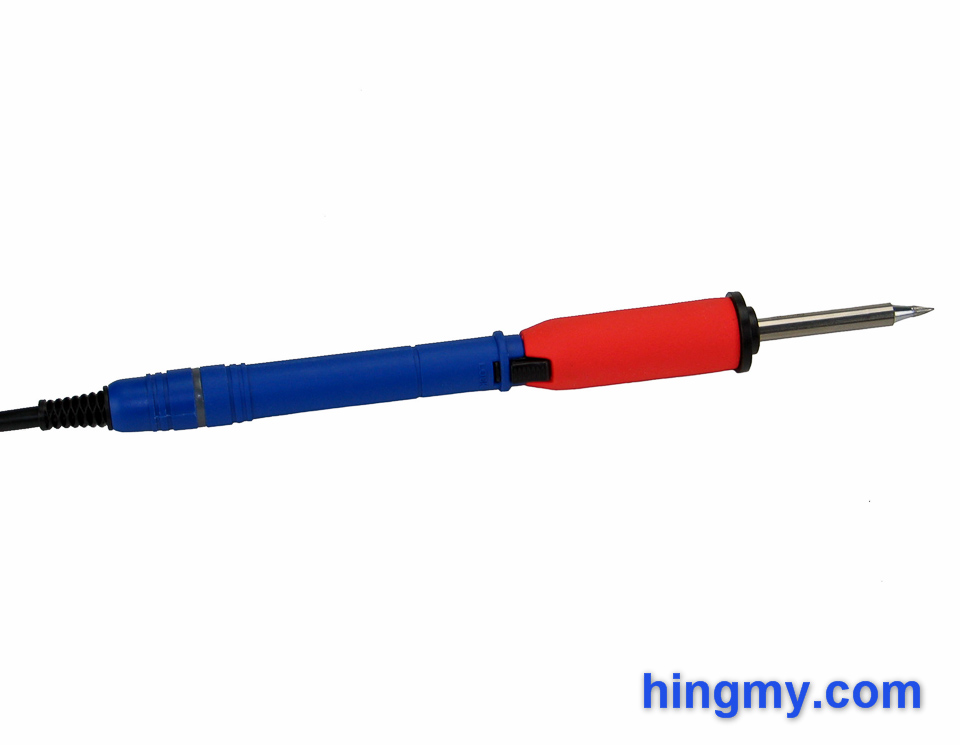 The iron is the most compelling reason to choose the FX-951 over other mid-market soldering stations. The wand is one of the smallest and lightest on the market. From a pure mechanical point of view, this soldering iron is one of the easiest to handle in the industry.

A red LED on the handle lights up when the iron is hot. Hakko missed the opportunity to turn the LED green when the iron has reached its operating temperature, which is an essential feature for anyone who cannot hear the buzzer. Deaf users will have to rely on their instincts.

There are three parts to the iron: the handle, the tip, and the grip. The pieces are held together by a quick-release built into the grip. By mounting the elongated tip directly in the heater coil of the handle the engineers at Hakko did away with the bulky screw fitting near the tip of so many irons. The result is an exceptionally agile iron with very little mass near the tip. 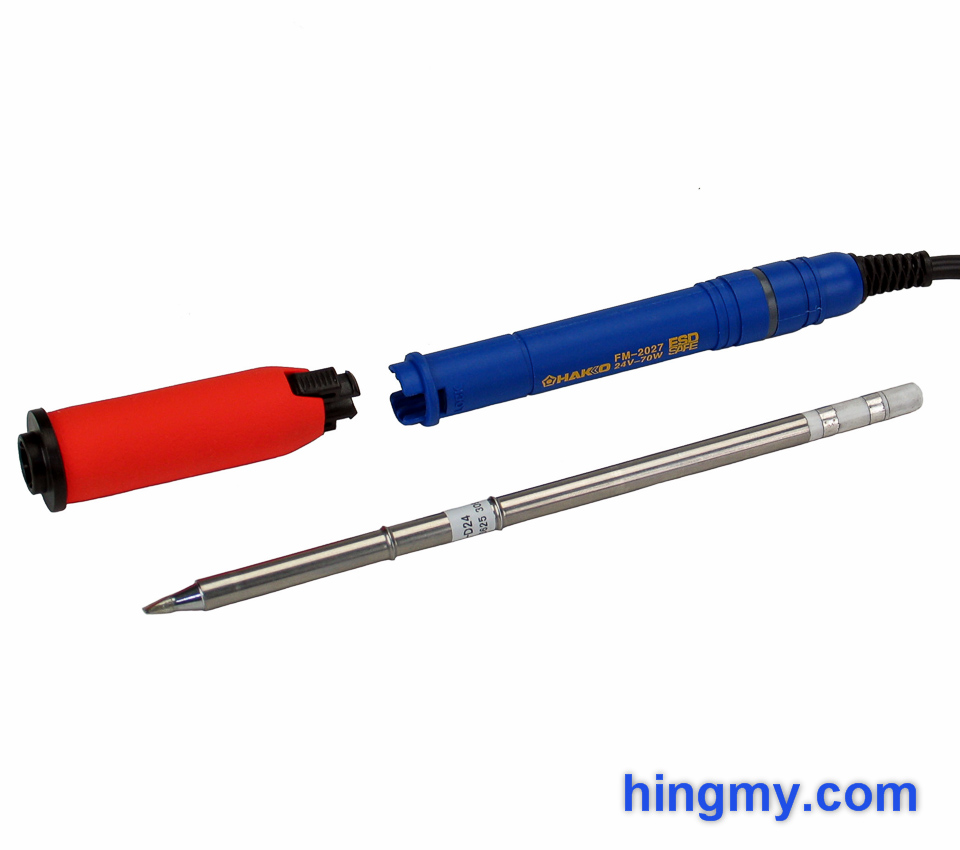 Tip changes are quick. Pressing the quick-release frees the tip and grip from the handle. If you have another handle and tip ready to go, inserting it in the handle is all you need to do to get back to soldering. The tip simply slides out of the grip. Removing a hot tip takes some care, but it can be accomplished without burning yourself.

Hakko offers a wide variety of tips for use with the FX-951. Due to their size the tips are 1.5 to 2 times more expensive than the tips used on entry level soldering stations. The iron is compatible with Hakko's professional soldering station, the FM-203, should you choose to upgrade in the future. 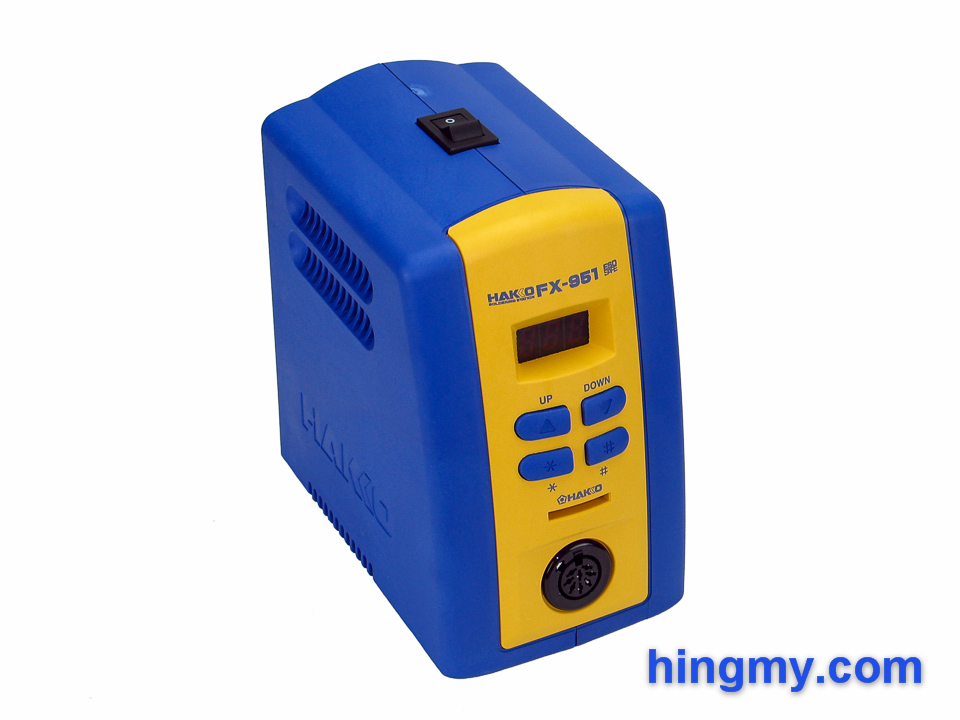 The control panel is needlessly complicated. Simply changing the temperature requires three buttons to accomplish. The * button selects the digit to change and the Up and Down buttons move it. The # button is used to set the temperature offset based on the thermal capacity of the tip mounted in the iron. Forget switching the unit from the factory default Fahrenheit to Celsius without the aid of the manual. The process involves holding buttons while turning the unit on. Configuring the sleep mode is even more insane.

Once the station is set up, however, the temperature control is easy enough to use. Even after coming back to the hobby after a few months, it takes only a few seconds to relearn how it is done. It's just frustrating to see engineers make something so simple so complicated.

The key that locks the controls is poorly engineered. Every FX-951 uses the same plastic key. That's only a minor oversight when your workers can defeat the mechanism by inserting a plain piece of paper. A determined attacker will get around the lock in under a minute.

Even if you don't care about the lock, the key still manages to get in the way. It must be seated in the keyhole for the control panel to function at all times. Thankfully clever users can do away with it entirely by gluing a piece of paper between the jaws of the optical sensor that controls the mechanism. 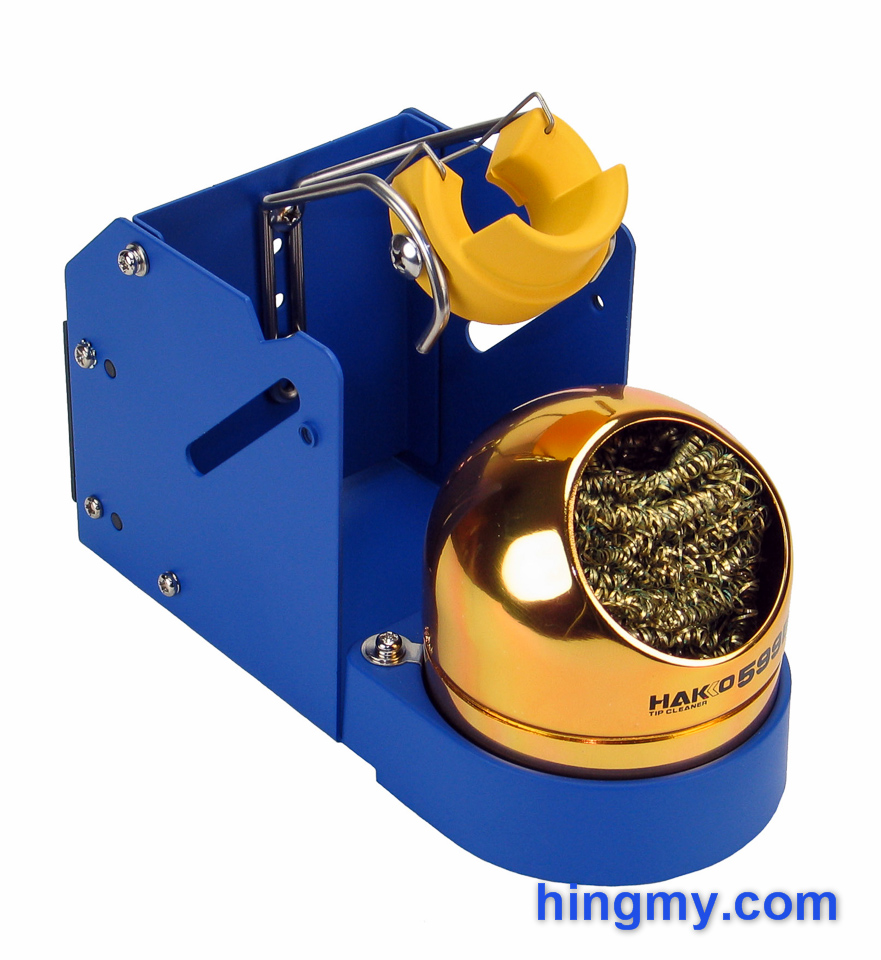 The FX-951 is not a particular powerful soldering station. Rated at 75 Watts it is just barely more powerful than Hakko's own entry level station, the FX-888D. All of it adds up to good, but ultimately mediocre performance. It takes the unit ~20 seconds to reach 350 degrees Celsius from a cold start. Recovery from sleep mode takes 5-10 seconds depending on how much time the iron had to cool.

Thermal capacity is more than adequate for general purpose soldering. The limits of this soldering station lie exactly where you'd expect them to be judging solely by the transformer's 75 Watt power output. Only parts with high thermal capacity give this iron trouble. Small joints are ready for solder in under a second.

The temperature display is inaccurate, but consistent. In my tests I measured ~330 degrees at the tip at an indicated 350 degrees. This error varies depending on temperature, which renders the temperature offset feature of the soldering station ineffective. 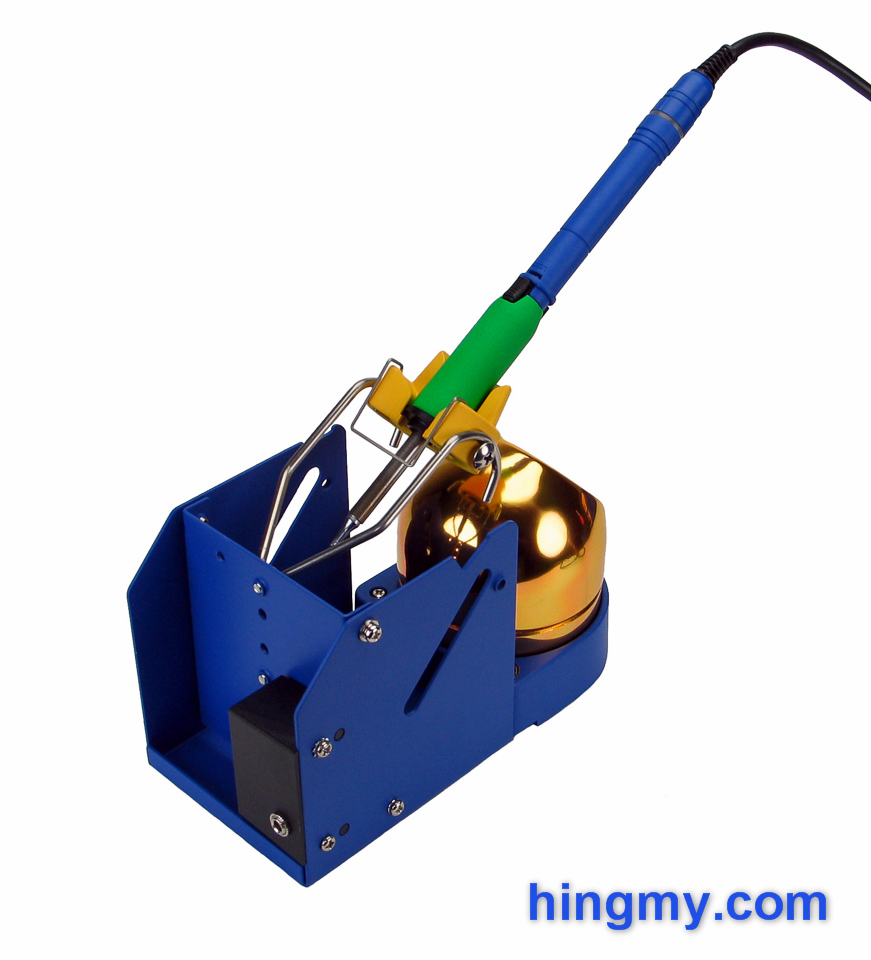 The FX-951 is very much defined by its iron, the FM-2027. Getting heat where it needs to go has never been this easy. The small wand almost feels like an extension of your hand. The power cable barely weights it down. Few irons in the industry can match the handling of Hakko's latest iron. This is one of the best irons for soldering small parts you can find on the market.

Thermal performance is mediocre, however. At times you'll have to wait almost 10 seconds for the iron to come back from sleep mode. User who take frequent breaks are better served by a faster iron.

Recovery time between joints is excellent on small parts. You can move from joint to joint without noticing a drop in performance. Every joint will heat up as fast as the one before.

The story changes when working with large parts like voltage regulars. The iron takes considerably longer to heat up those parts compared to the best irons on the market.

The FX-951's overall performance makes it a good choice for professional users, who use their soldering station for a few hours at a time. The FX-951 performs well in short burst, but will fall behind in a production environment. A second here or there waiting for the iron to heat up won't matter to many, but these seconds add up quickly when you make your money soldering all day long. 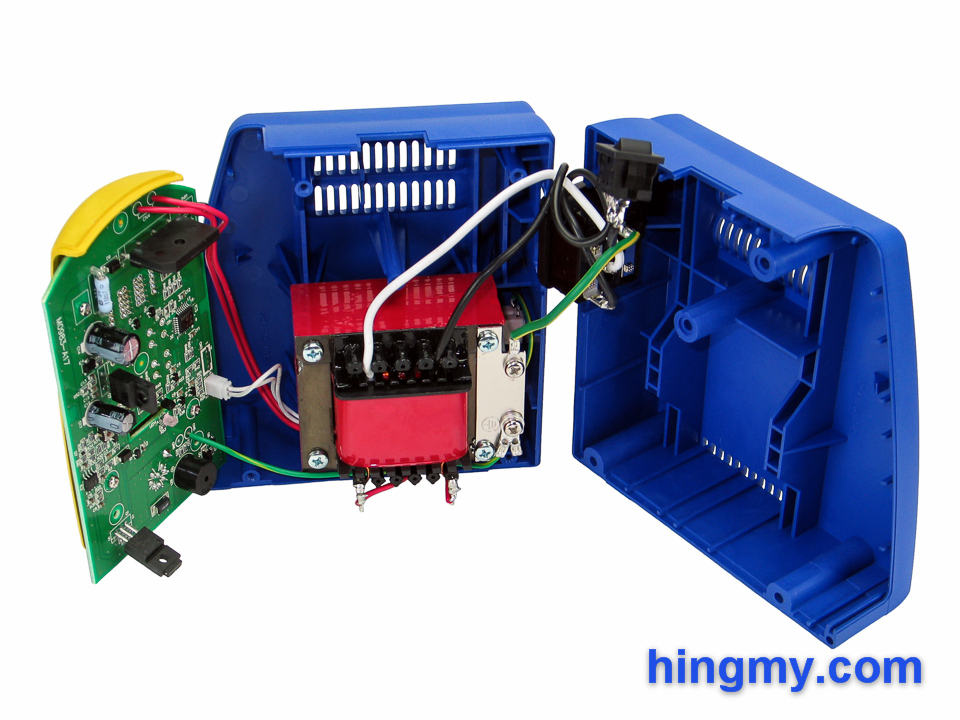 The Hakko FX-951 is a mid range soldering station with a professional touch. The exceptionally good iron makes the many flaws of the soldering station worth living with. After working with the iron for only a few minutes you'll never want to go back to a larger, heavier model. Hobbyists and professionals alike will notice the remarkable difference in handling.

The FX-951 is a good package that will leave hobbyists and infrequent users wanting for nothing. Professional users should look at more powerful models to bring the iron's recover time down. Everyone else gets one of the best irons on the market today.