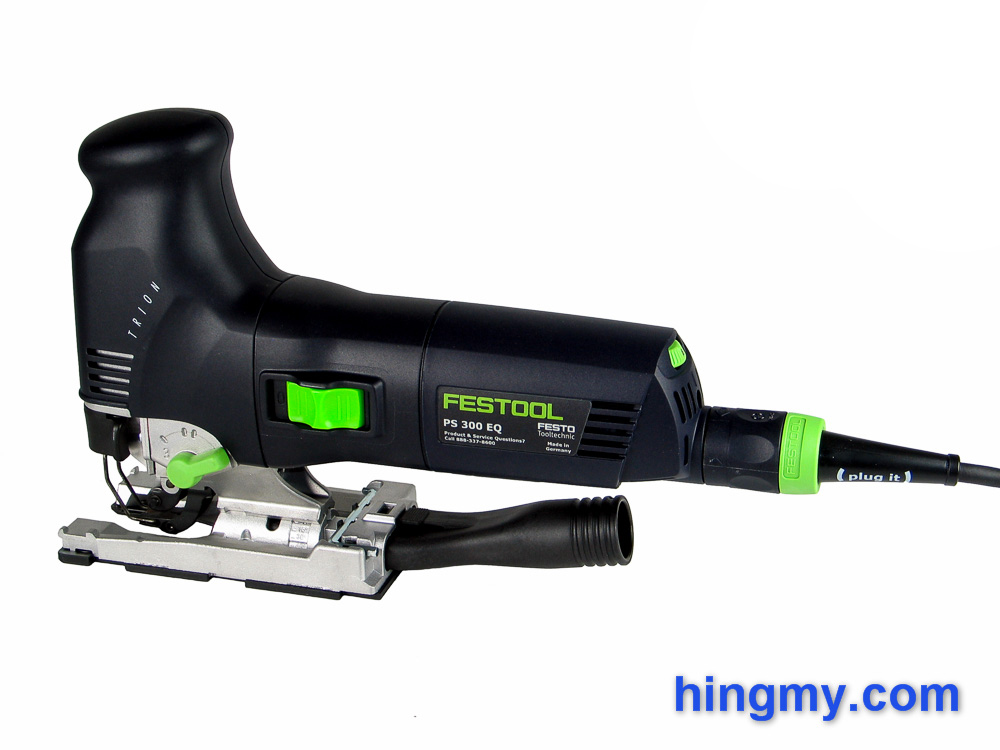 One of the capabilities missing in my woodworking shop was that of a high quality jigsaw. The fine lines and controlled cuts a jigsaw can produce are immensely useful. Unfortunately jigsaws are also notorious for producing rough surfaces and plenty of tear out. Only the best jigsaws are good enough for fine woodworking.

I chose to audition one of the best, the Festool PS 300 EQ, in my shop. This saw is supposed to be perfect for furniture building. Let's take a look at what the PS 300 EQ brings to the table.

The PS 300 EQ is Festool's jigsaw for fine woodworking and carpentry. It has been built with the usual Festool design principles in mind. Not only does the saw cut very well, but its build quality is excellent, and dust collection is built in. The barrel grip makes the saw very controllable when making fine, intricate cuts.

As expected the jigsaw can mount many of Festool's accessories. For example, it can be used with the track guide for straight line cutting. The power cord is removable, as it is on every Festool tool.

The speed of the saw is controlled with a dial at the rear of the saw. The dial infinitely varies the saw between 1,000 and 2,900spm. A switch-type trigger installed on the side of the saw turns the tool on and off. The saw's speed can be changed while it is on.

3 amp
No Data: 4
powered by Hingmy.com 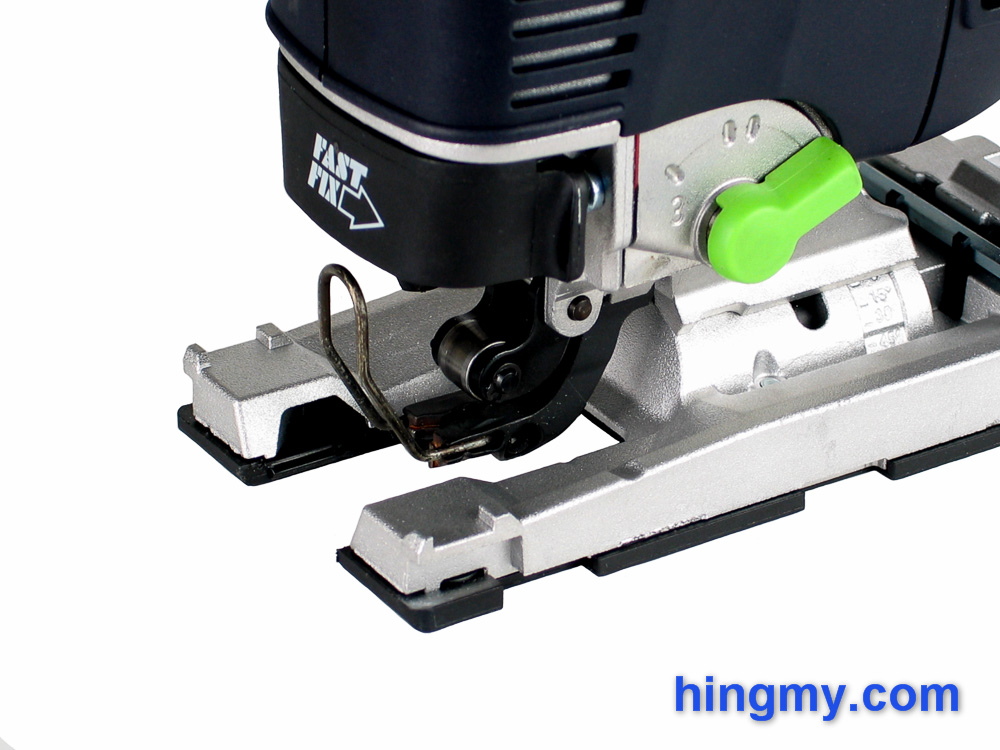 The PS 300 EQ uses Festool's Trion blade guide system. Two metal guides and a metal wheel combine to guide the blade and keep it from deflection in any direction. These three points of contact give the Trion system its name.

The two metal guide arms prevent the blade from moving side to side. During normal operation they do not make contact with the blade. If the blade deflects to one side ever so slightly one of the arms prevents it from going further. The distance between the blade and the arms can be adjusted manually. Only a few thousands of an inch are necessary for the system to work.

The wheel is located behind the blade. Like on most jigsaws it supports the blade from the back during a cut. It also provides some lateral stability. The orbital cutting motion makes use of the wheel as well. When engaged the wheel guides the blade through its orbit.

The Trion blade mount is easily the best feature of the PS 300 EQ. It is a quality, all metal blade guide system that performs well. During tests in our shop the Trion eliminated blade deflection in all standard-duty scenarios. To top it off the mechanism is also rugged and maintenance free. 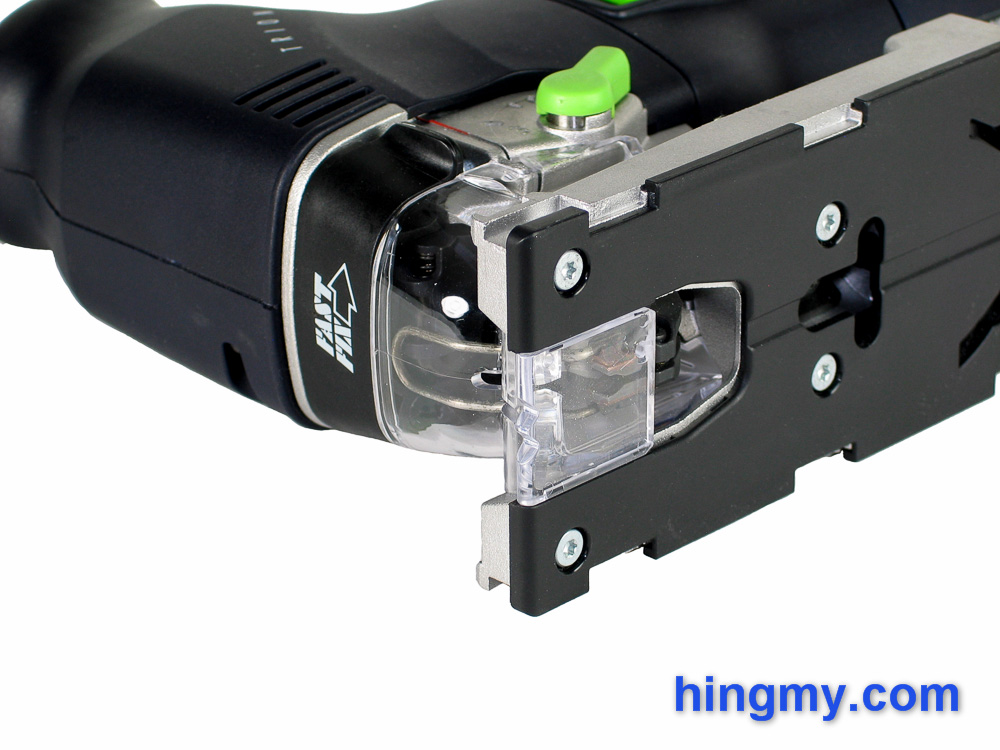 The kit comes with a clear plastic chip guard. This guard installs in the base plate. It encloses the blade like a zero clearance insert encloses the saw blade on a table saw. When installed the guard drastically reduces tear-out. So much so that finish quality cross-cuts in plywood are possible. This type of cut is out of reach for just about any other jigsaw.

The insert is a disposable part. When initially installed the blade must cut it's own opening into the guard. Since each blade cuts its own size slot, a different insert must be installed for every blade type. Festool sells replacements guards in combo packs. The systainer has a special place to securely store 5 of these guards.

Besides the blades guides the tear out guard is what sets the PS 300 EQ apart from other saws. The guard noticeably improves the quality of the cut. With it installed the jigsaw can be used for finish level cuts.

The angle adjustment mechanism of the PS 300 EQ works well, but is uncharacteristically sloppy for a Festool tool. The cutting angle is adjusted by loosening a bolt in the base plate of the saw from below. This allows the base to rotate from side to side. It can be re-tightened in any position. The Allen key necessary for this operation is housed in the rear of the base plate. There is a single reference stop, which the base locks into, for the vertical position.

Setting a cutting angle other than vertical must done at the blade. The base includes an angle scale, which is too inaccurate to be of any use, especially when building furniture. The base locks into place in any position. No amount of rough handling will make it move. Unfortunately when not in the vertical position the base locks 1/4" forward of where it is when the jigsaw is set to cut vertically. This moves the blade almost out of reach of the tear out guard. A thin blade will not receive any tear out protection when cutting at an angle. 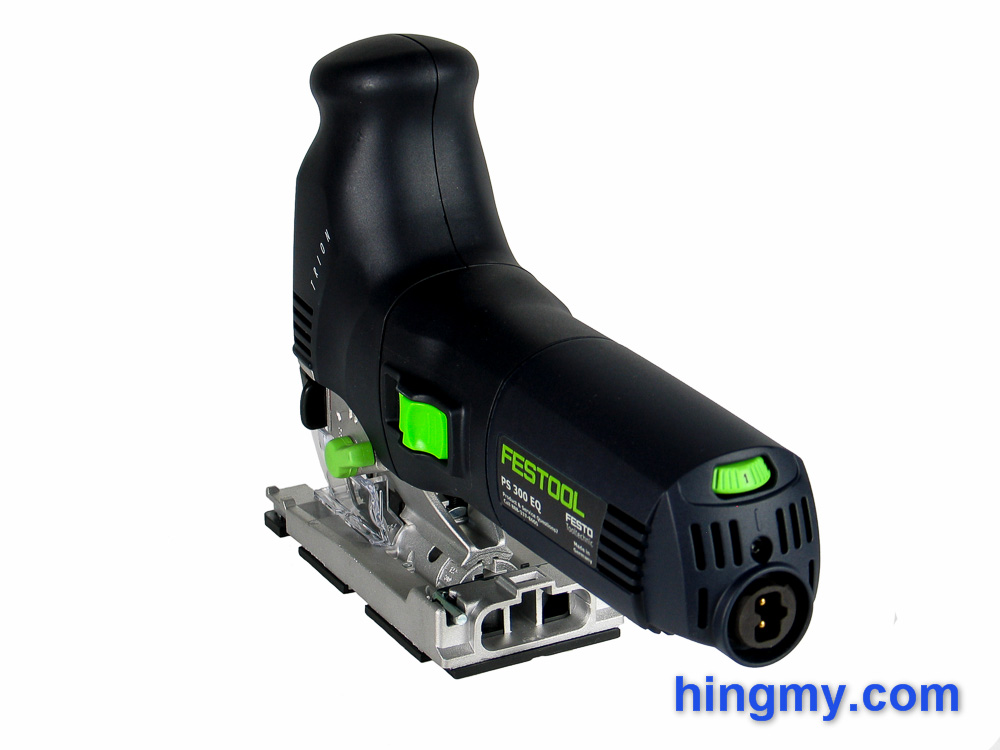 The PS 300 EQ comes equipped with a tool-free, spring loaded blade change lever. A pull of the lever releases and ejects the blade. To install a new blade the lever must be held in the open position while the blade is inserted. Simply letting go of the lever locks the blade in place.

The blade change mechanism can be operated with the dust shield and tear out guard in place. Blades are held securely and are aligned with the cut automatically. It takes only seconds to change the blade and get back to cutting. Overall this process is about as perfect as it can be.

The blade change lever and the other parts of the mechanism are made from metal. Their quality matches that of the rest of the tool. 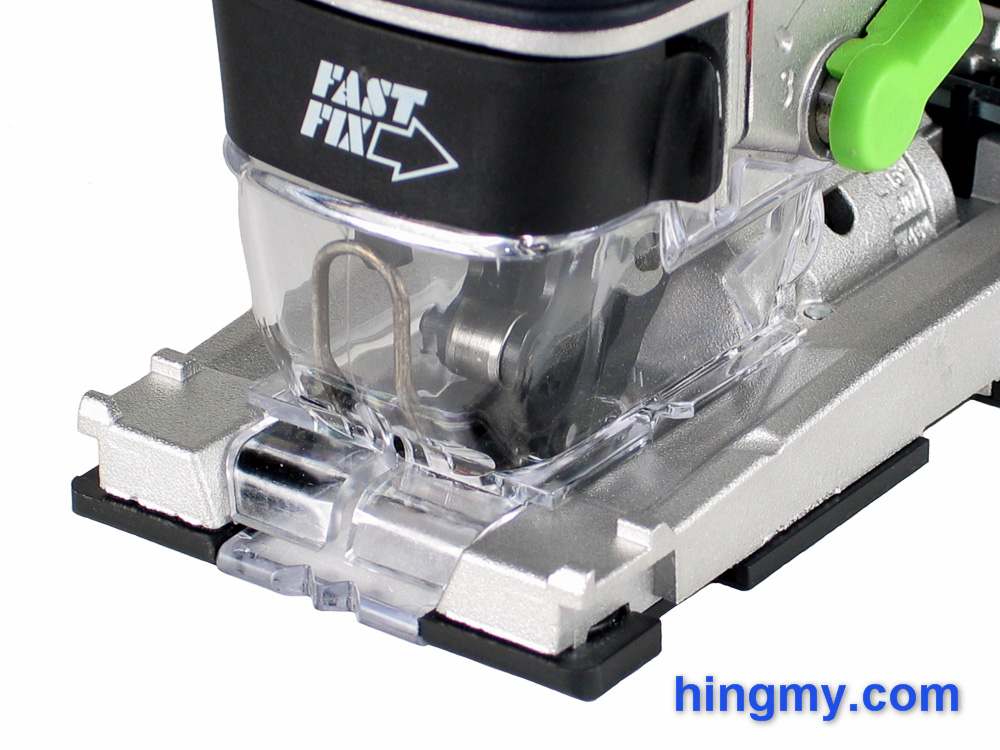 The adapter itself seats securely in the dust port. There is no play in the mechanism. While operating the saw with a hose attached, the entire tool including the dust adapter feel like a single piece. Dragging the hose around feels natural.

To increase dust collection efficiency Festool totally enclosed the cutting area with a clear plastic shield. The jigsaw collects practically all dust from above the blade. Visibility suffers with the shield installed, but remains manageable.

Overall dust collection is merely ok, because the tool does not collect any dust that escapes below the blade. Since the blade of a jigsaw never fully pulls out of the cut the chips produced in the middle or at the bottom of the cut are ejected downward before the dust collector can pick them up. This is especially noticeable with very long blades. Festool is doing as well of a job here as any manufacturer. There is no jigsaw on the market that collects dust below the cut.

The PS 300 EQ is a joy to use in the shop. The barrel body and knob-like front grip make fine cuts easier to achieve than with a D-handle saw. The power cord and even the bulky dust collection hose do not get in the way. The knob handle is particularly useful when cutting curves.

In a test the motor is strong enough to pull a 4" blade through solid oak. The feed rate dropped as would be expected, but the resulting cut was burn free and, more surprisingly, square along its entire length. This is where the Trion mechanism shines.

Even at full speed the PS 300 EQ is significantly slower than other jigsaws on the market. The premium jigsaw from Bosch chews through material almost twice as fast as the Festool. While this is not an issue in the woodshop, it can be on the job site. If your jigsaw sees a lot of mileage, the Festool PS 300 EQ might not be the saw for you. 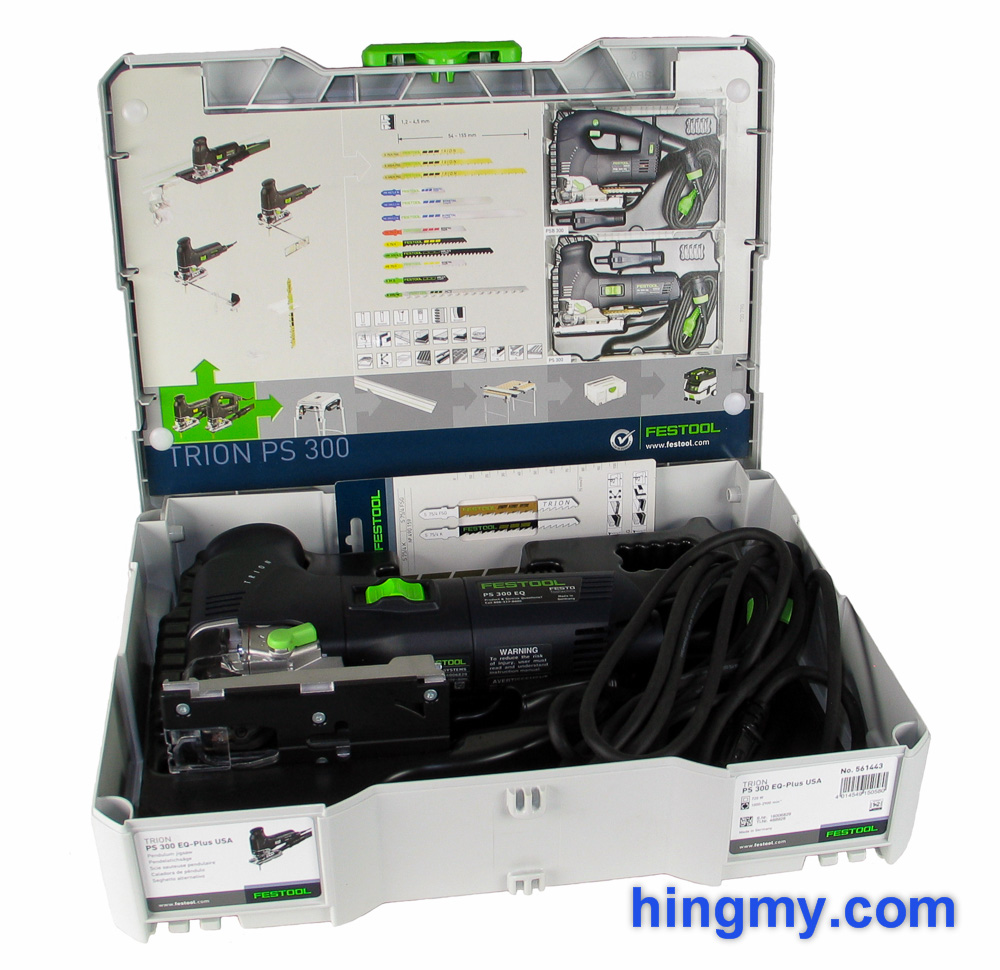 The jigsaw ships from the factory in a systainer sys-1. The molded plastic case holds the jigsaw, power cord, dust adapter, and tear out guards with room left over for blades and accessories. Being a systainer the case stacks on top of other systainers.

At the moment the systainer line is the finest line of tool cases available. Getting one of these with the tool is a significant benefit. A systainer is not only rugged and water tight, but also very user friendly. It's one of the best ways to get your tool to the job site.

The PS 300 EQ shares the fine woodworking segment with several competitors. Chief among them is the Bosch JS572EBL. This saw uses a blade guide system similar to Festool's Trion. Bosch claims that their mechanism is a significant improvement. Like the Festool the Bosch jigsaw is equipped with a totally encased blade, a tear-out guard, and a through-the-plate dust collection system. Side by side the two saws look like they share the same design.

We can confirm that both saws are capable of making square and clean cuts. The Bosch, however, cuts about twice as fast the Festool at its highest setting. This makes the Bosch JS572EBL the better choice for heavy usage scenarios. The Festool pulls away in points, however, if the Festool system is important to you.

If you prefer D-handle jigsaws, Festool has you covered with the Festool PSB 300 EQ. This saw is identical to the PS 300 EQ in all respects except the style of handle. The same Trion blade guide mechanism ensures that both saws cut equally well. 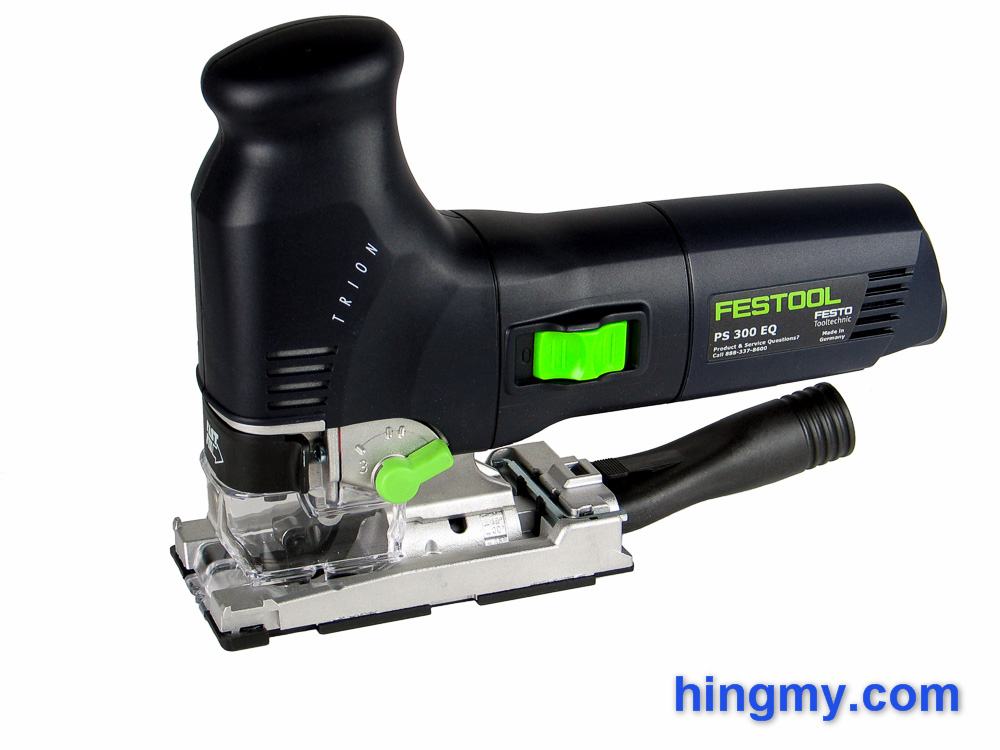 The Festool PS 300 EQ is undoubtedly one of the best jigsaws for fine woodworking. The Trion blade guide mechanism ensure square cuts. A tear out guard that creates a tight, custom fit around the blade reduce tear out to a new minimum for jigsaws. Finish cuts across the grain in veneer plywood are possible with the PS 300 EQ.

In typically Festool fashion the quality of the tool is superb. The brick like feel of the tool and the generous warranty seem to suggest a very long life for this jigsaw. Dust collection is near perfect. The PS 300 EQ is compatible with the Festool system of accessories, which boosts the tool's utility beyond that of other jigsaws. It comes in a systainer for safekeeping and easy transportation.

If you are a Festool fan, the PS 300 EQ is a fine jigsaw. Cut quality and performance are what a woodworker or contractor demands. On the job site other, more powerful jigsaws outperform the Festool. If you are looking for a jigsaw that performs at the top of it's field, the Festool PS 300 EQ comes highly recommended. No other saw significantly outperforms this one.