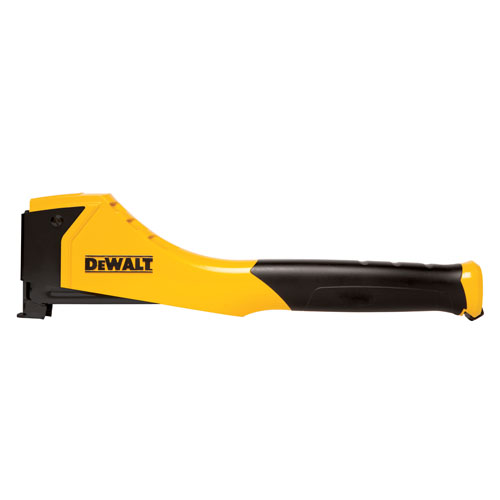 Hammer tackers are fickle things. They have a tendency to jam and be a nuisance on the jobsite. I finally had enough and bought the Dewalt DWHTHT450, a hammer tack that looks as good as it performs. Let's take a look at what makes it work.

Unlike cheaper models that use stamped steel, the DHWHTH450's body is made from poured steel. The body and the handle are formed from two pieces split along the long long axis of the tool. The result is a tool that is indestructible under normal operation. I am sure I could use it as a hammer, an axe, or a club, if I had to.

The strike mechanism is made from heavy gauge steel. The tool's shoe, the part that hits the work piece, is fused with the actuator arm. This ensures long tool life.

The DWHTHT450 hold two full sticks of staples. To refill the magazine, undo the latch at the back of the tool, pull the spring back, insert a new stick of staples, and push the spring forward. The operation is fast and error free. The staples align themselves automatically.

Dewalt recommends using the tacker with its own brand of staples. I have had no problems using generic ones. The tacker takes three kinds of staples:

In case you forget, the staple specs are printed directly on the body of the tool.

so far I have fired 5 sticks of 12mm staples into a plywood subfloor. The tacker never misfired. A normal swing is sufficient to adequately seat the staple. The shoe did little damage to the rosin paper I was stapling to floor except for a couple instances I used excessive force.

Staple depth is consistent when the tacker is swung with the same amount of force. Just like other hammer tackers, the DWHTHT450 will drive the staples with different amounts of force depending on how hard the user swings the tool. I had to hammer down a few staples which I tacked in place with too little force.

The solid body causes the tacker to vibrate just like hammer during a strike. You feel it doing it's thing, but you won't mind it for the first few hundred strikes. If you have to use the tacker all day, however, you'll be sore the next day. A power stapler is more suitable for this kind of work.

I was looking for a hammer tack I would not have to replace in a few years. The Dewalt DWHTHT450 is that tool. It's a professional level tool that looks and performs great. I finally have a hammer tacker that I can use to get the job done quickly and reliably.