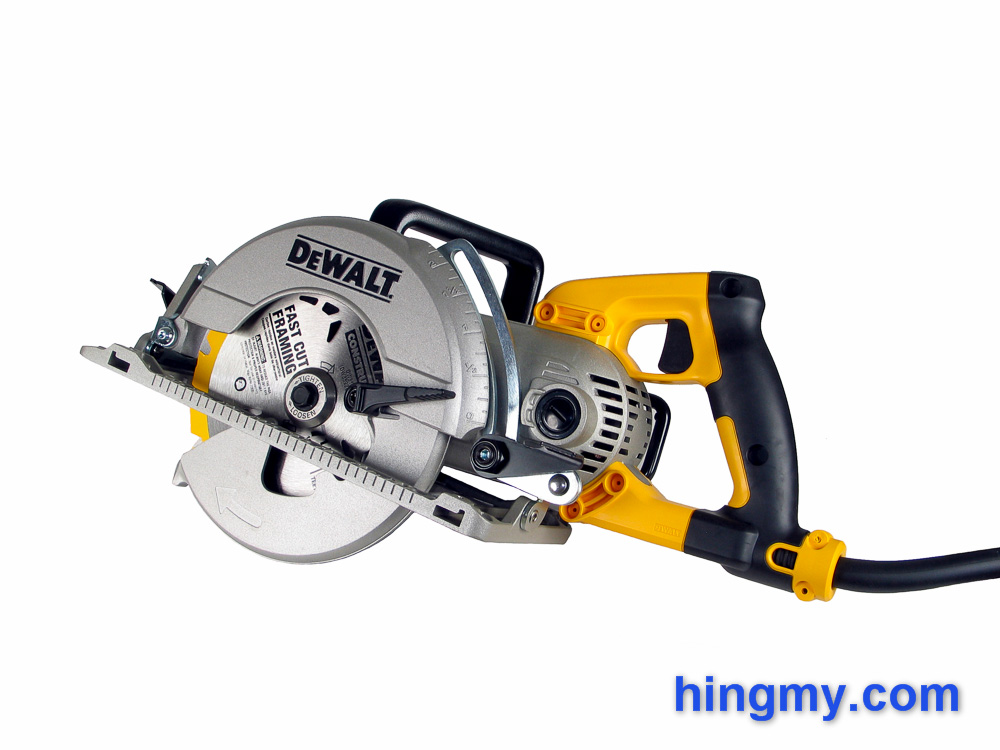 Like every reviewer I want to review the best of the best to establish. I'll claim that I do this to set a reference, but it's just as much about being able to play with those tools. In the circular saw market one of the candidates for the top stop is the DeWalt DWS535 circular saw. This intimidating beast sports a lot of metal. That's just the way we like it. Let's see if the saw is indeed elite.

The DWS535 is a heavy duty circular saw for all day work on the job site. DeWalt has engineered the saw to cut faster than anything on the market. To do that the saw is equipped with a large 15amp motor, an all metal body, and a worm drive gear box. Everything about the DWS535 screams performance and durability.

The heart of the DWS535, the motor, is encased in a metal housing. It is significantly larger and more powerful than most motors found on direct drive saws. At 15 amps the motor tries to squeeze the maximum available power out of a 120V circuit. If there are more powerful motor available, they will not outperform the motor of the DWS535 by a wide margin.

The worm gear housing, which gives the saw its characteristic shape, is also made of metal. The housing covers a large worm gear that plays a big part in the saw's performance and durability. The only three pieces on the saw that are made of plastic are the two grips of the saw and an accent piece that covers the top of the gear housing.

The gear housing is filled with oil for durability. Unlike lesser saws, which seal the oil into the gear housing, the DWS535 has a oil refill port. Should the saw run low, it can be refilled with generic heavy gear oil. Refills are an infrequent occurrence. The user manual does not provide a maintenance schedule. 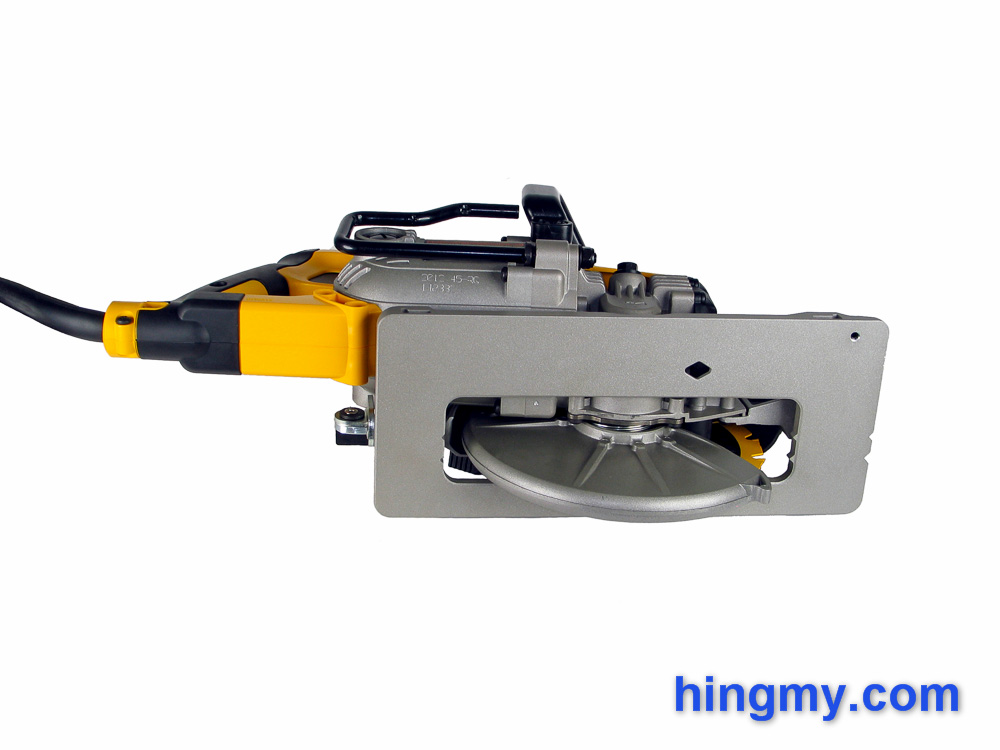 The upper and lower blade covers of the DWS535 are made from magnesium. This gives the saw an incredible aura of durability. During use the saw feels like solid brick of metal.

The lower blade guard is spring loaded. A horn at the intake end of the guard does a good job at rotating the cover out of the way during a cut. The guard lever is located uncomfortably far away from the top handle. The guard can be held in the open position with the thumb of the hand resting on the fore grip, but only in an uncomfortable way. The user has to slide the hand closer the the blade cover than it would be during normal operation.

The saw ejects most of the cutting dust at the end of the upper blade guard. After a few cuts the dust starts building up in the ribs of the base plate in the lower left corner. While this is not best possible dust management system, it performs reasonably well for a framing saw. 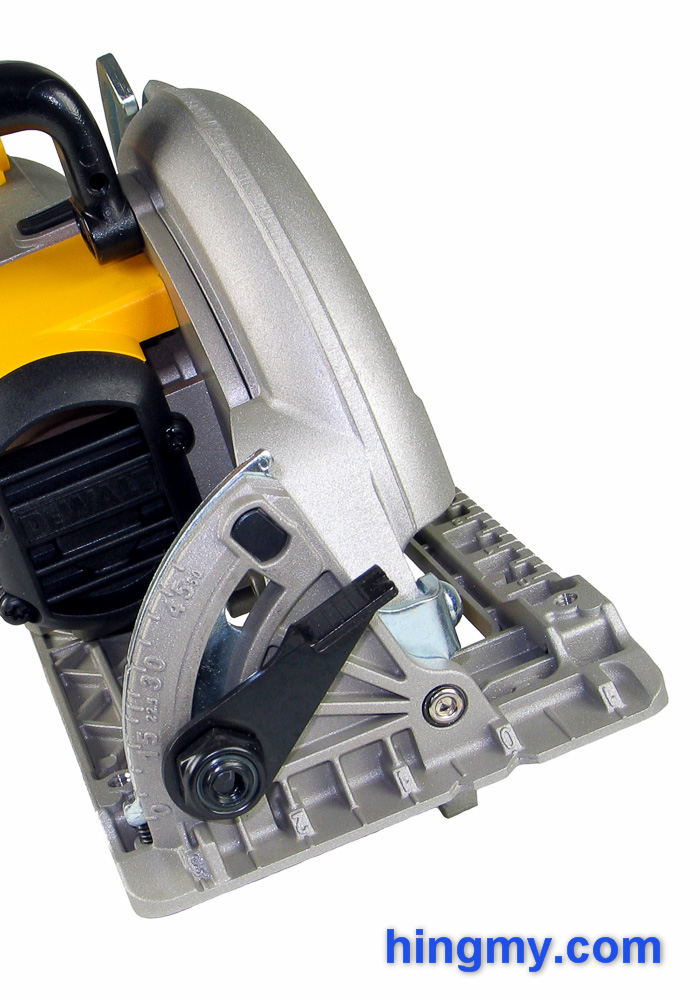 On the front edge of the base plate DeWalt added a scale that references the distance from the blade. The scale is formed by the base plate itself thereby ensuring excellent durability. A ridge every 1/2" from -1" to +3" from the blade and two notches at 0" and 1/2" are used for referencing. The numbers indicating whole inches can be hard to read in low light, or on a dirty saw.

A second scale on the long edge of the base plate indicates how far the saw has cut into a sheet horizontally. This is a useful feature for making stopped cuts for cutouts. Like the scale on the front edge of base plate, this scale is formed by the base plate itself. It's very accurate and durable. A tick mark every 1/4" from 0" to 7 3/4" is used for reference.

Both of these scales are only accurate to ~1/16". This is good enough for framing, which the saw was built for. While the saw can certainly be used for fine woodworking, the scales are too inaccurate to be useful in this environment.

The plate has built in mounting points for attaching an auxiliary cross-cut guide. The guide, the DWS5100, is an accessory that does not come with the saw. With the guide installed strip cuts become fast and easy. The saw goes on auto pilot. 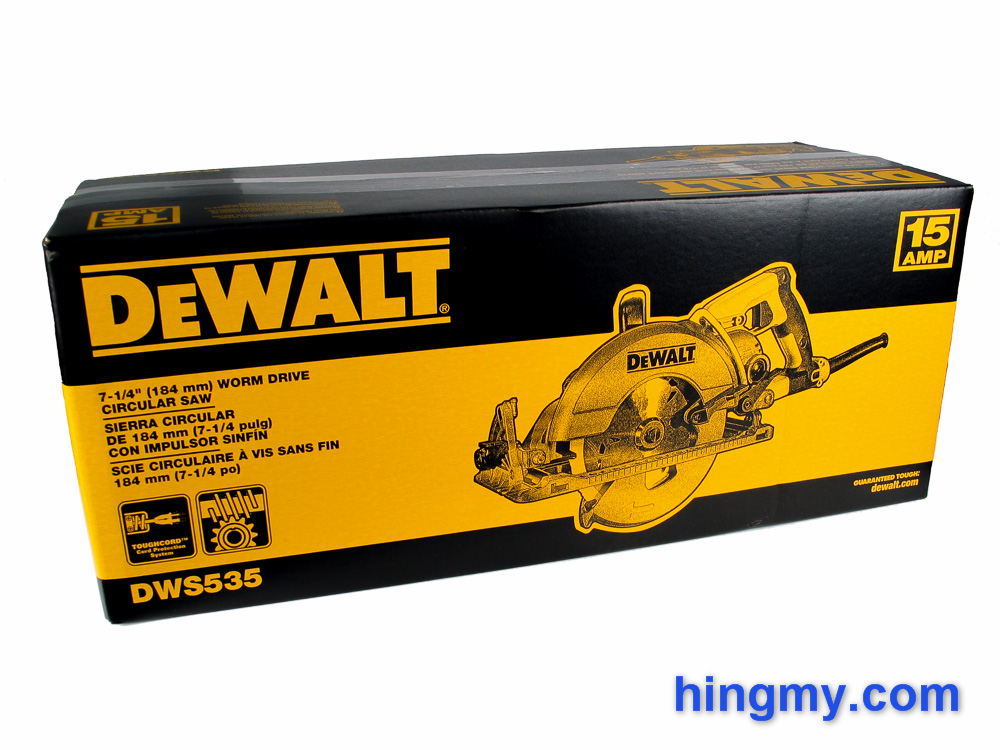 The base plate tilts up to 53 degrees out of square. A single lever locks the plate in place. An angle scale offers single degree adjustability. The scale has built in stops at 0, 22.5, and 90 degrees. The base plate locks into these stops with a noticeable click making quick angle adjustments a breeze. To allow for accuracy over time the scale's 0 degree setting can be calibrated with a set screw.

In use the blade angle lock of the DWS535 is one of the best. The lever locks the base plate in place with total authority. The plate will not move no matter how rough the saw is being handled. You can put the saw down with the plate set to an arbitrary angle and feel confident that the saw will retain that angle when you pick it up again. The saw lets you do this all day long. Not to mention, the base plate is always true and square to the blade. If you cut angles frequently, few saws do it as well as the DWS535.

The depth scale is built into the upper blade guide in classic circular saw fashion. The numbering of the scale is formed by the metal of the guard indicate the cutting depth from 0" to 2 1/2" in 1/4" increments. The end of the metal guide arm indicates the actual cutting depth of the saw. In operation the scale is accurate to about 1/16" at the blade.

The depth setting is locked into place with a lever of the same design as the angle adjustment lever. Like the the other lever this one performs exceptionally. The base plate locks in place without any hits of movement. Unlocking the lever can require some strength at times, but the depth adjustment feature works well overall. 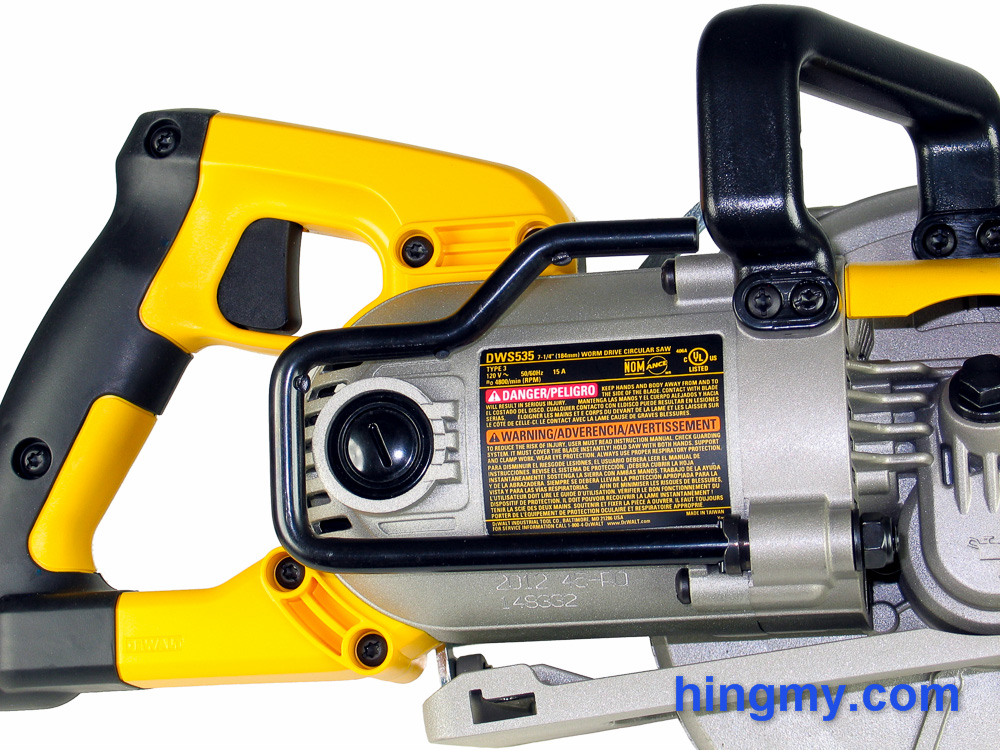 The brushes of the electric motor are located behind plastic covers on the two sides of the motor housing. The covers can be removed with a large flat head screwdriver. A soon as the cover is removed the brush assembly pops right out for replacement. Changing both brushes of the DWS535 takes about 5 minutes to complete.

The saw comes equipped with an all-metal storage hook. The hook is sized such that it fits comfortably over a 2x4. Little tabs on the hook ensure the saw does not slide along the piece of lumber it was put down on.

A spring loaded mechanism locks the hook in place both in its resting and expended positions. When expended the hook forms a 90 degree angle with the body of the saw. Cuts can be made with the hook extended. If you do not like the idea, the hook can be removed entirely.

What the DWS535 does best besides looking tough is cut sheets and framing members. This saw has been designed to perform at the top of the market. The DWS535 cuts faster than any saw we have ever had in our shop. The raw power of the large motor combined with the high arbor speed make this saw glide through plywood faster than anything short of a cabinet saw.

The motor is strong enough to push the saw through doubled and tripled plywood with excellent efficiency. The feed rate slows down somewhat, but the motor never sounds labored or gets unduly hot. The saw acts like it could do demanding work all day long. That's exactly what it can do.

The weight of the saw combined with the excellent base plate make the DWS535 very stable during a cut. When making cuts against a guide the saw wants to stay square on its own. Straight free-hand cuts are not a problem.

On the flip side the DWS535 is one of the heaviest saws you can buy. All this weight can get you tired, if you have to carry it around all day long. The natural place the DWS535 wants to be is the cutting station. It'll chop up sheets and framing members for you all day long. Up in the rafters the power of the DWS535 surely comes in handy, but its bulk make it chore to move around. On flat ground, however, there is nothing like it.

Besides performance the DWS535 has been engineered for durability. We did not have the means to torture test the DWS535. The few saws we know about that have been out with crews in the Seattle area have all performed well for years. Given the excellent fit and finish of the saw this is not surprising at all. The DWS535 is surely one of the most durable saws you can buy. Compared with the average direct-drive saw it is also an excellent value for your money.

DeWalt sells two versions of this saw: the DWS535 and the DWS535T. The two models are identical with the exception of the twist lock plug installed at the end of the power cable of the DWS535T.

The DWS535 is one of the best circular saws out there. It cuts plywood faster than any saw we have tested. Built almost entirely from metal, DeWalt has produced a saw that will last a long time. The magnesium base plate with its excellent angle and depth adjustment features is a pleasure to use. Few saw can compete with the DWS535 in terms of ergonomics and power.

All that power and quality comes at the price of handling. The DWS535 is an extraordinarily heavy saw. It is best used on level ground at a cutting station. In this setting it will outperform just about anything.

The DWS535 might just be the king of all circular saws. It puts a tremendous amount of cutting power into your hands at a price that should not be possible. This saw is undoubtedly among the elite of circular saws. The DWS535 cuts faster and last longer than just about anything you can buy.