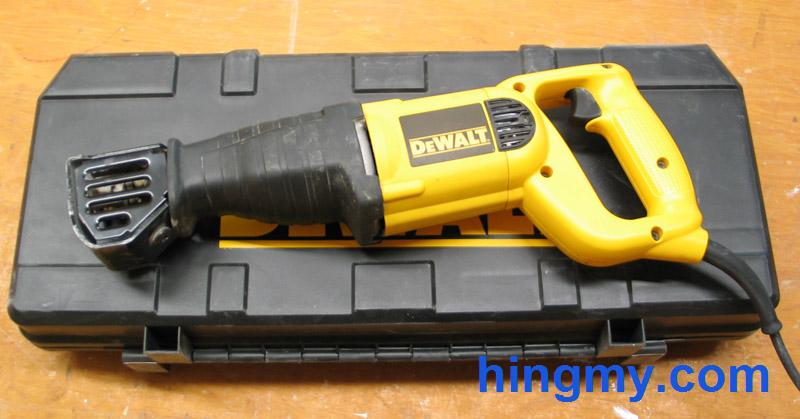 I have the DW303, the predecessor to the DW304PK. Its nearly identical to the new DW304PK. Let's take a look at what makes the DW304PK work.

The DW304PK has a fixed, metal head married to a 10amp motor. It's clearly a tool for demolition rather than the finesse. The blade can be mounted either vertically or horizontally (the DW303 can only mount the blade vertically). The head does not rotate.

A metal cage protects the piston at the head to the tool. There is no pivoting shoe that follows the work piece. The cage is flat up front to allow the user to rest it against the material being cut. The bottom corner is rounded to make it easier to push the saw through a cut. The left and right edges of the cage are square. The saw's natural axis of operation is up/down.

The cage is made from heavy gauge metal. Denting or bending it is practically impossible; a hammer blow would be needed to do that. The black paint is a another story. It will rub off fairly fast as the tool is being used. The steel below will rust if exposed to water. A regular coat of tool oil eliminates this problem.

The DW304PK's body is symmetric. It can be used both by left-handed and right handed users without any limitations. The dominant hand is places on the pistol grip. It controls and guides the tool. The other hand supports the front the tool. It provides stability.

The black part of the barrel is a rubber grip. It is tapered towards the front of the tool to allow the fingers of the operator to wrap around the tool naturally. The surface provides an excellent grip to both a bare hand, and a work glove. It does, however, attracts dust much easier than the rear of the body.

Most of the motor's weight is concentrated just behind the front grip. The saw is slightly back heavy when balanced on the front grip. During operation the user is unlikely to feel much of this, but it's worth noting. There is enough weight on the head to push the saw through a cut without operator assistance.

The DW304PK uses a pistol trigger. The trigger is operated by a single finger. There is no trigger lock.

The user can control the motor's RPM with the trigger. It is possible to make the blade move very slowly to start a cut. The saw has very little power at low RPMs, but plenty to start a cut.

The saw does not have any gears. The trigger is the only way to control the speed of the saw.

The blade change mechanism on the DW304PK is lever activated. Holding the lever in the open position unlocks the blade. Change the blade and release the lever. The enter operation takes only a few seconds.

All parts of the blade change mechanism are made from metal. The lever is covered in yellow rubber for operator comfort. There is no need to be delicate when changing a blade. This part of the saw will certainly outlast the motor.

The blade is held securely by the locking mechanism, but does have some play when fully mounted. This is not an issue for a reciprocating saw, which is to be used for demolition. Just don't expect your saw to cut perfect lines. 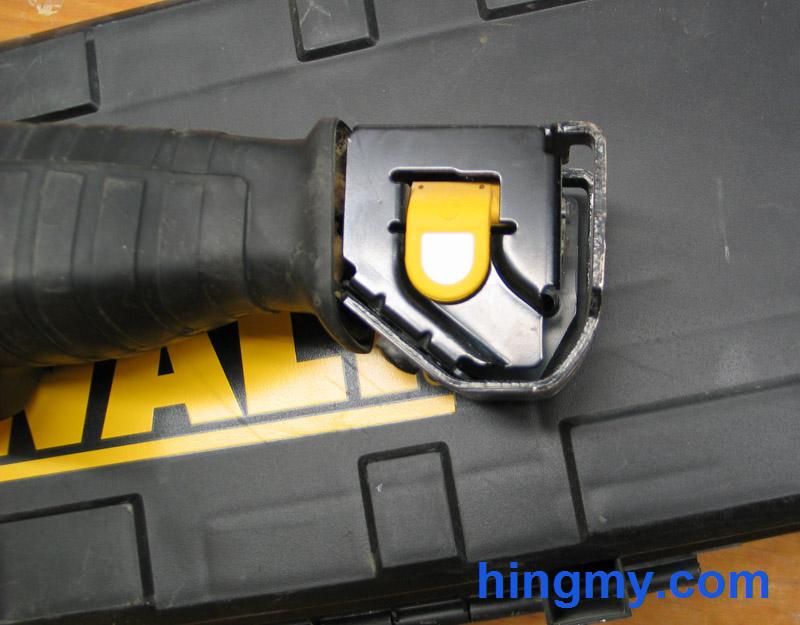 Nails and framing are where this saw shines. I used it to demolish a closet and a wall in my house. The saw was ready when I needed it, and cut as fast as I needed it to. There was no downtime to wait for the saw to cool down.

Flat out the saw cuts almost too fast to be controllable. A 2x4 gets cut through in seconds.

The DW304PK powers through metal just as easily. As a test I cut into some angle iron I hard lying around made from 1/4" steel. The saw did not bind or bog down, but progress was slow. An angle grinder is the better tool for this job. 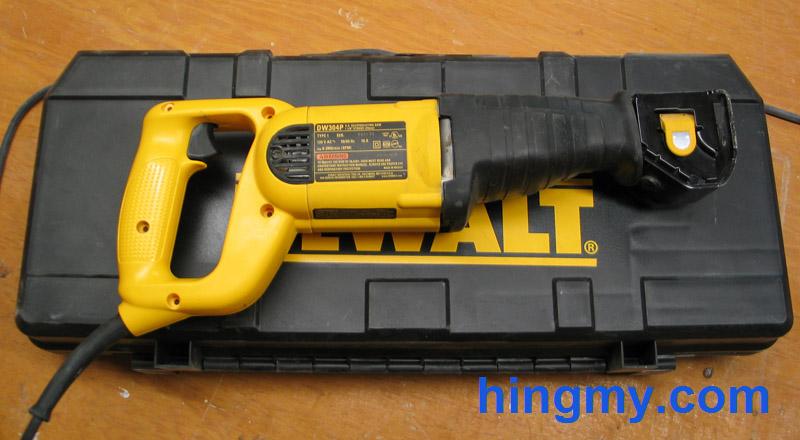 The DW304PK is an amazing value in reciprocating saws. If you do not use it everyday, you get a commercial grade tool for the price of a residential model.

If you have never owned a reciprocating saw, the DW304PK is amazingly useful to have around the house. Not only can it be used to do construction, it can also be used for tasks around the house. I use mine to break large junk into pieces small enough for the trash can. With a long extension cord the saw can be used to trim trees. The DW304PK sees a surprising amount of work in my house.

The DW304PK is commercial grade reciprocating saw at consumer level prices. It is almost indestructible and will chew through everything you throw at it. The saw feels heavy in your hands. Once unleashed, it is hard to put down.

If you are looking for a quality reciprocating saw that cuts well, lasts a long time, and does not break the bank, the DW304PK is a winner.