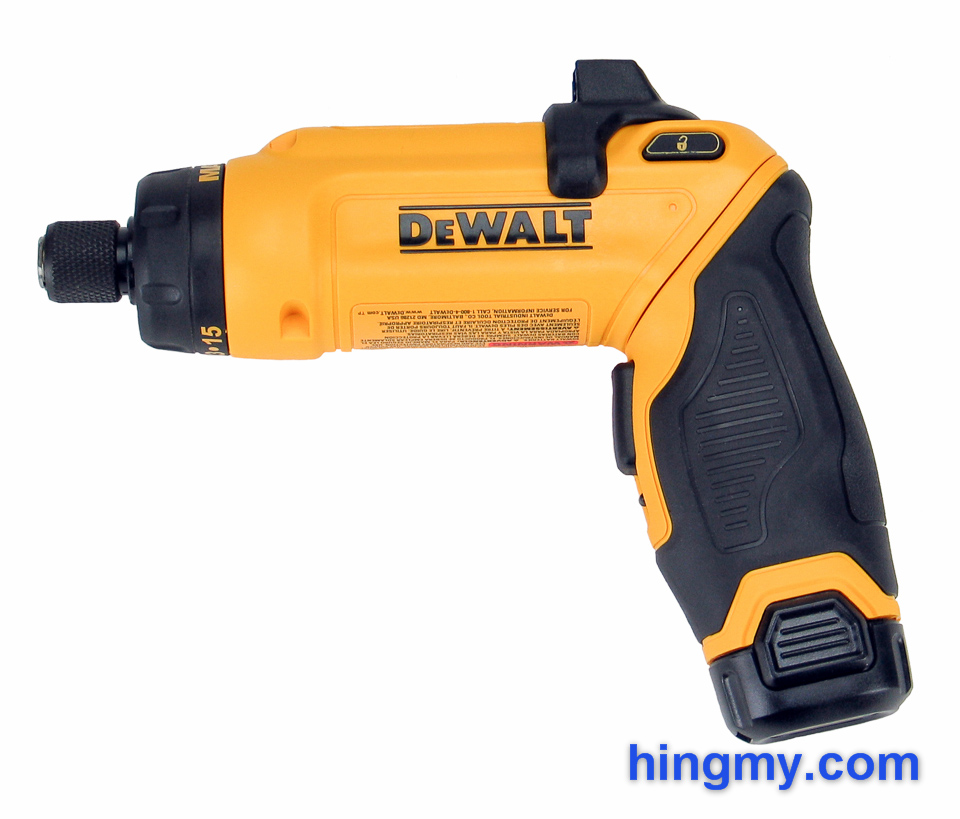 One look at the press release of the DCF680 was enough for me to order one. The gyroscopic control mechanism is one of the most exciting new technologies to come to the world of power tools in years. It won't have the same impact as the brushless motor revolution that is ongoing, but the gyro is undoubtedly more fun to use. Let's take a look at DeWalt's new gyroscopic screwdriver, and find out if it is a power tool, or a gimmick.

DeWalt promotes the DCF680 as a professional grade tool for installers, carpenters, and trades people who make frequent use of a low torque screwdriver. This is a fitting description, considering the excellent build quality of the screwdriver and its low torque motor. The yellow plastic body flows nicely into a black, rubber covered grip. Only the motor, gearbox, and gyro are made of metal. DeWalt claims that the DCF680 has the build-quality to be used "continuously" on the job site. I doubt the motor will hold up to that sort of abuse, but the tool is certainly well-built. 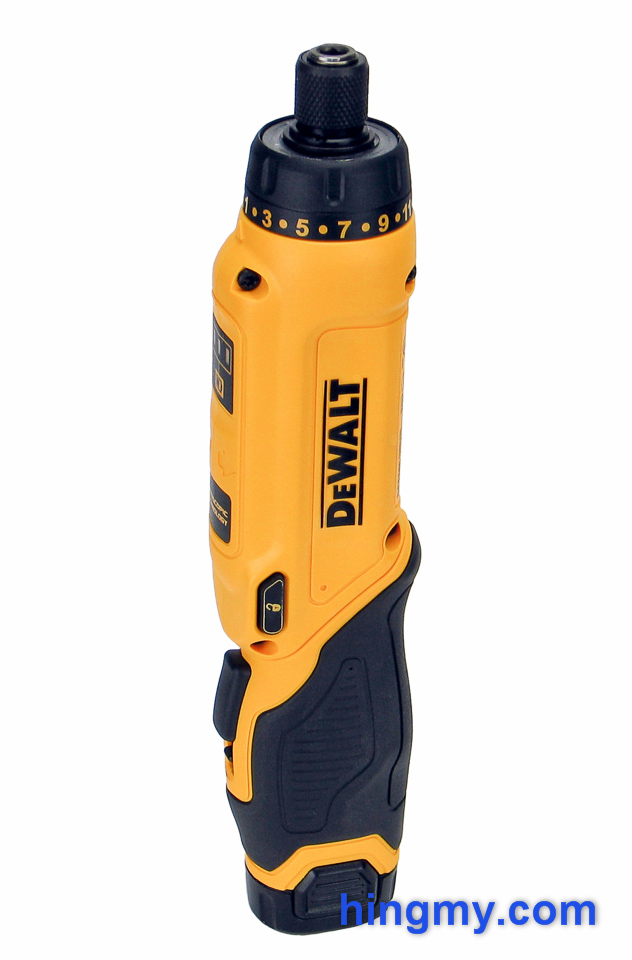 As you probably know, the DCF680 is a new kind of screwdriver. It uses an internal gyroscope to translate the operator's hand movements into actions that control the motor. A twist to the right translates into forward motion; a twist to the left into reverse. Twist your hand a little more and the driver speeds up.

The traditional direction selector switch is no longer necessary and has been done away with. The trigger, however, is still necessary. On the DCF680 the trigger engages the gyroscope instead of the motor. This establishes the position of the screwdriver in three-dimensional space. Any further movement away from this initial position will control the motor.

The DCF680 can be used in any position, including overhead and upside down. The gyro does not care. The only limitation is that there must be enough room around the fastener for a 10-20 degree twist of the screwdriver.

The most important thing that can be said about the gyroscopic mechanism is that I never felt like I was fighting the screwdriver. Simply placing the screwdriver on the screw and pressing the trigger somewhere along the way did the trick. The gyro ignores almost all motion of the screwdriver that is not a twist, and registers a twist of your wrist with uncanny accuracy. Precise control over just how much torque you want to apply to the screw head is both very possible and intuitive to accomplish.

DeWalt's gyroscopic control is not a gadget; it is a proper control mechanism. Even this incarnation, the technology's first under the DeWalt brand, is already usable in a professional environment. Think what you will about the DCF680. The gyro technology has the potential to be at the core of many good tools in the next few years.

The handle of the DCF680 is hinged to transform the screwdriver from a pistol grip model to a straight body one. To transform the driver the user has to press one of the two lock buttons at the top of the driver and twist the handle. 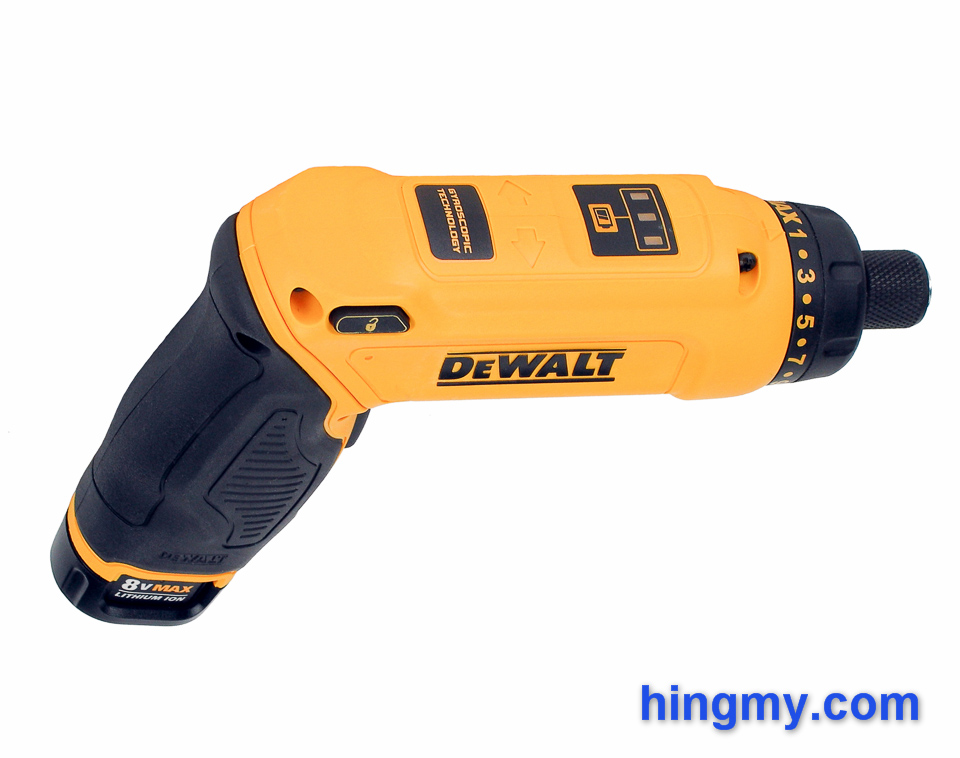 The DCF680 comes equipped with a two LED work lights built into the tip of the driver. Positioned to either side of the chuck, the LEDs produce a light pattern that reaches both below and above the tool. A small shadow develops right on top of the fastener when the bit gets close to the surface.

The light comes on when the trigger is pressed, and stays on 20 seconds past the point in time the trigger is released. Light output is low, but high enough to illuminate the area right in front of the driver with pleasant, bright white light.

The DCF680 has a very weak clutch. At the highest setting of 15 the clutch lets go when a 1-1/4 inch drywall screw reaches a depth of 1/2". This level seems to be set very low for a screwdriver that was designed to see action on a job site. The 15 very fine and accurate settings are much more appropriate for use by appliance and electronic repair professionals.

On the plus side the clutch is built very well. Every setting is meaningful and different from the one before. The clutch itself will probably last into the later years of the tool's life, but heavy usage might make it the part that breaks first.

The DCF680 is the first tool to use DeWalt's new 8V lithium-ion battery. DeWalt removed a few cells from its 12V battery to create a much smaller battery for what probably will be a new line of small power tools. Along with the size reduction comes a significant reduction in power and capacity. In our test the DCF680 was able to drive about 100 1-1/4" screws into construction grade lumber.

The battery charger restores a dead battery in ~20 minutes, which is fast enough to keep the DCF680 working continuously on a two battery setup. A single red LED indicates the status of the battery charger. You'll have to learn the code printed on the charger to decipher the LED's pattern. 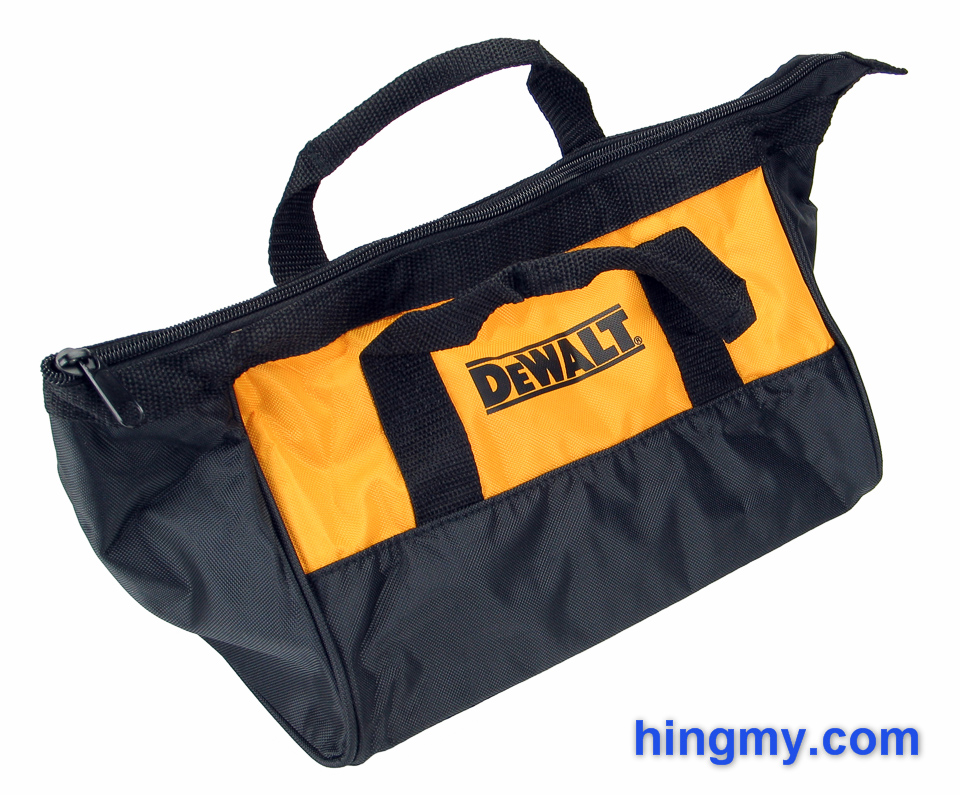 Three green LED lights indicate the battery's charge. As with most indicators of this kind, the range of each LED is very large. The first LED disappears shortly after you start using the driver, the middle one stays lit forever, and last LED has a very short life. The indicator lights up every time the trigger is pressed, which is very annoying to anyone who does not care about the feature.

The bag included in the kit is uninspired. It groups all parts of the kit and accessories in one compartment without any dividers. Neither water proof nor stackable, the bag represents a trend toward saving money at the expense of usability and value.

The DCF680 takes some getting used to at first. The gyro produces a hum when the trigger is pressed that misleads the user into thinking that the motor is turning. After a while the brain learns to distinguish between the sound the gyro makes and that of the motor, and stop ringing the alarm bells whenever you press the trigger.

As stated before, the gyro is a pleasure to use. Due to its ability to switch direction quickly, the DCF680 felt better in our low torque tests than any other tool we have ever tested. If your work depends on frequent changes of rotation direction, the DCF680 will make you work faster.

A quick look at the raw performance of the tool proved to be rather disappointing. The DCF680 is a very weak driver. It was able to drive a 1-1/4" screw into construction grade lumber and sink the head below the surface, but it was clear that the driver was near its limit doing so. In a pinch the DCF680 can do tougher work, but you'll have to work through frequent motor stalls.

When working with smaller fasteners and soft materials the DCF680 truly shines. The gyro, low torque clutch, and small size of the driver work together to make the DCF680 one of the most agile tools for the job.

After working with the DCF680 for a few hours it seems to me that the gyroscopic control has a place in the market. It won't replace the traditional trigger in high torque situations, but it does feel more organic when doing low torque work. If you do not like the idea of using gyro control, you can skip the DCF680. It does not represent a revolution. If you like to try something new, the mechanism offers a new way of doing something old. 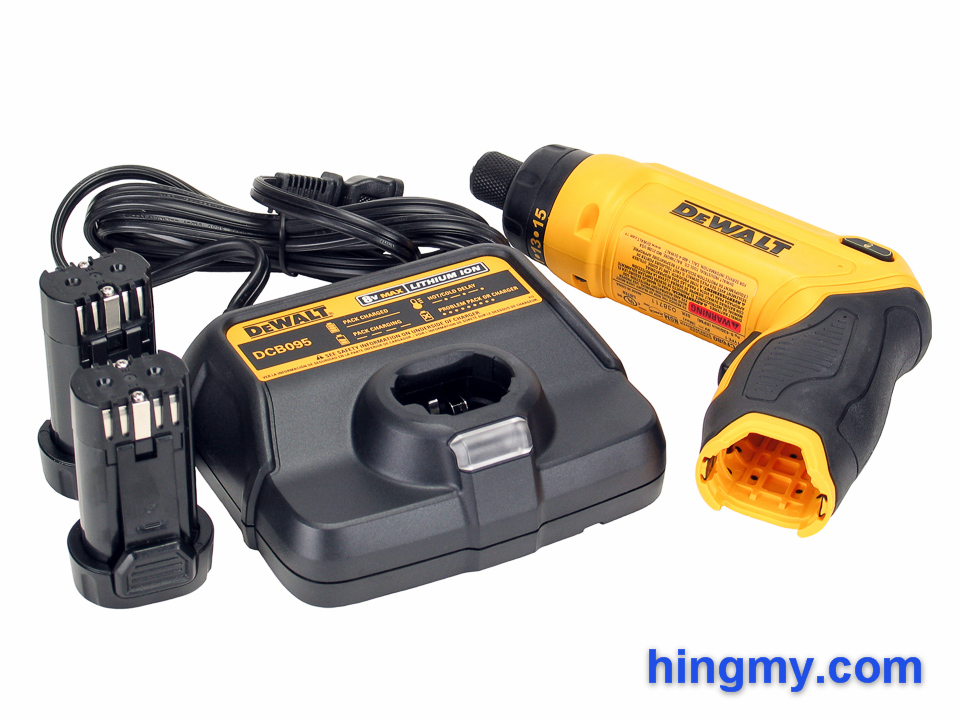 The DCF680 is a well built screwdriver with a few pronounced flaws. The gyroscopic mechanism used to control the driver works really well. It lets the user change the direction of rotation without flipping a switch. A low torque motor, weak clutch, and sloppy handle hold the DCF680 back.

The DCF680 won't change the way you work. The under-powered motor squanders the great potential that lies in the gyro. This limits the DCF680 to low torque work. In these situations, however, the driver has the potential to truly shine. No other tool feels as good as the DCF680 when making frequent changes to the direction of rotation.

DeWalt has created a package that shows potential, but gets beat by better tools. You won't regret purchasing the DeWalt DCF680, but you won't get a full featured screwdriver.