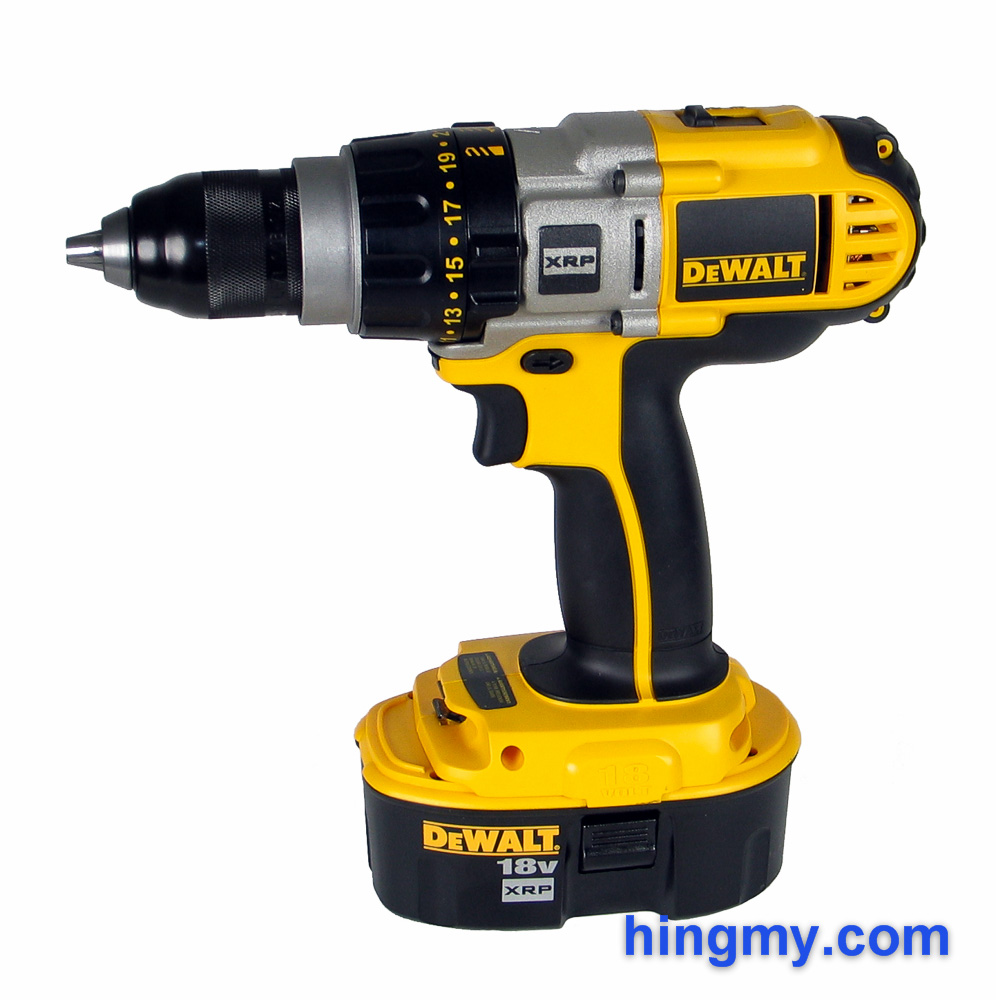 A cordless drill is probably the most important power tool to have in your toolbox. It is indispensable around the house. In the shop it forms a natural pair with the impact driver. Since the drill sees so much use it's usually a good choice to buy a powerful, capable unit.

DeWalt's DCD940KX cordless drill is the company's flagship model in the 18V range. With a metal chuck and gearbox the DCD940KX has been built for power and longevity. I use the DCD940KX as the main drill in my shop. Let's take a look at how well it did in the Hingmy workshop. 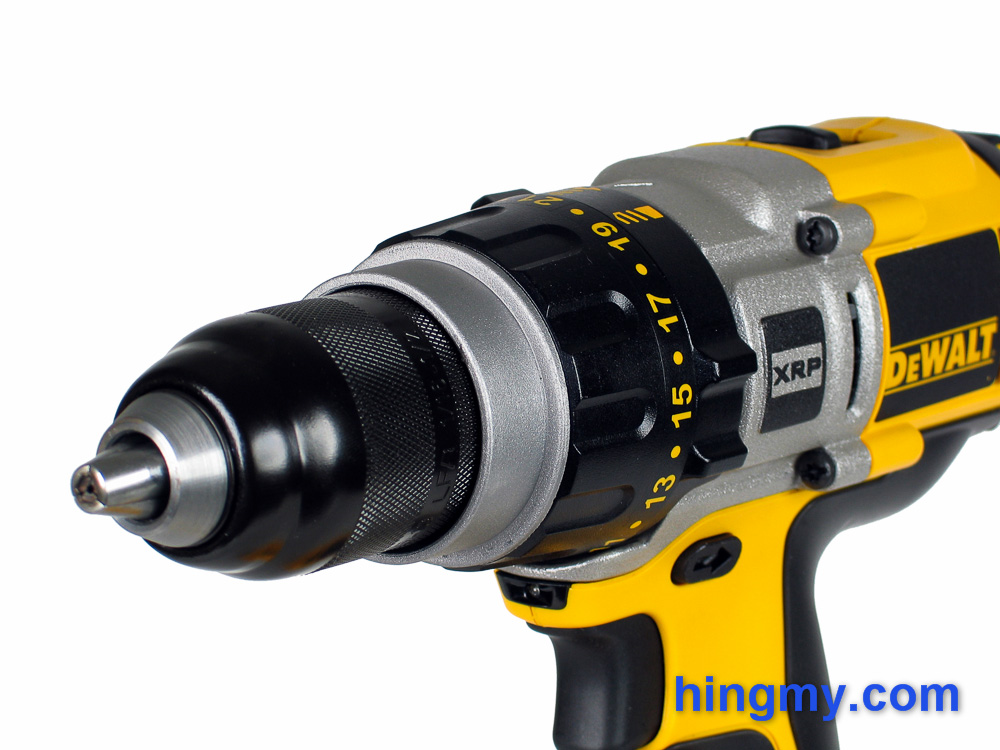 DeWalt designed the DCD940KX to be a drill that takes care of most tasks on the job site. All design decisions fall on the size and power side of the line to determent of price and weight.

The DCD940KX is a large and heavy tool. It has an all-metal gear box and chuck married to a powerful motor. A large 18V Lithium-ion battery pack counterbalances all this weight at the other end of the handle. If you are looking for easy handling, a smaller tool may be a better choice. If you are looking for capability and power, however, the DCD940KX is an excellent choice.

The first impression of the DCD940KX is one of quality. Every part of the tool has been built for the job site. The metal body of the tool is not only durable, but also very beautiful to look at. The metal chuck makes the drill look heavy-duty. 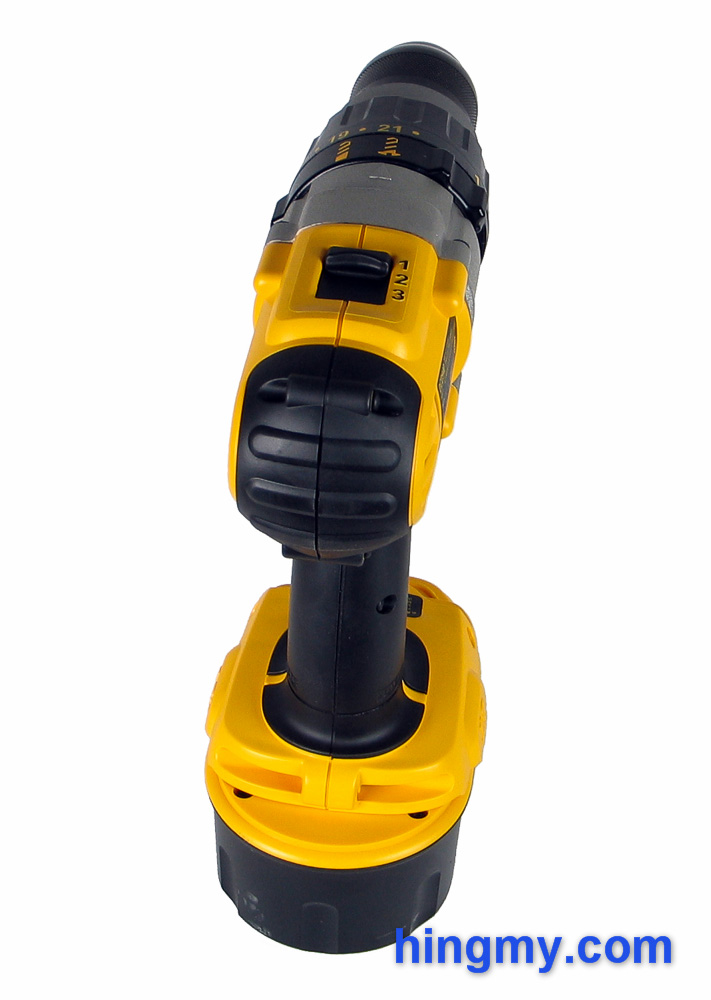 The tool has three gears and an infinitely variable trigger. A gear selector switch at the top of the tool sets the maximum speed. The trigger varies the speed from 0 to the selected maximum speed.

When in top gear the DCD940KX is one of the fastest cordless drills available. The slower gears make the drill manageable when driving screws or doing fine work. 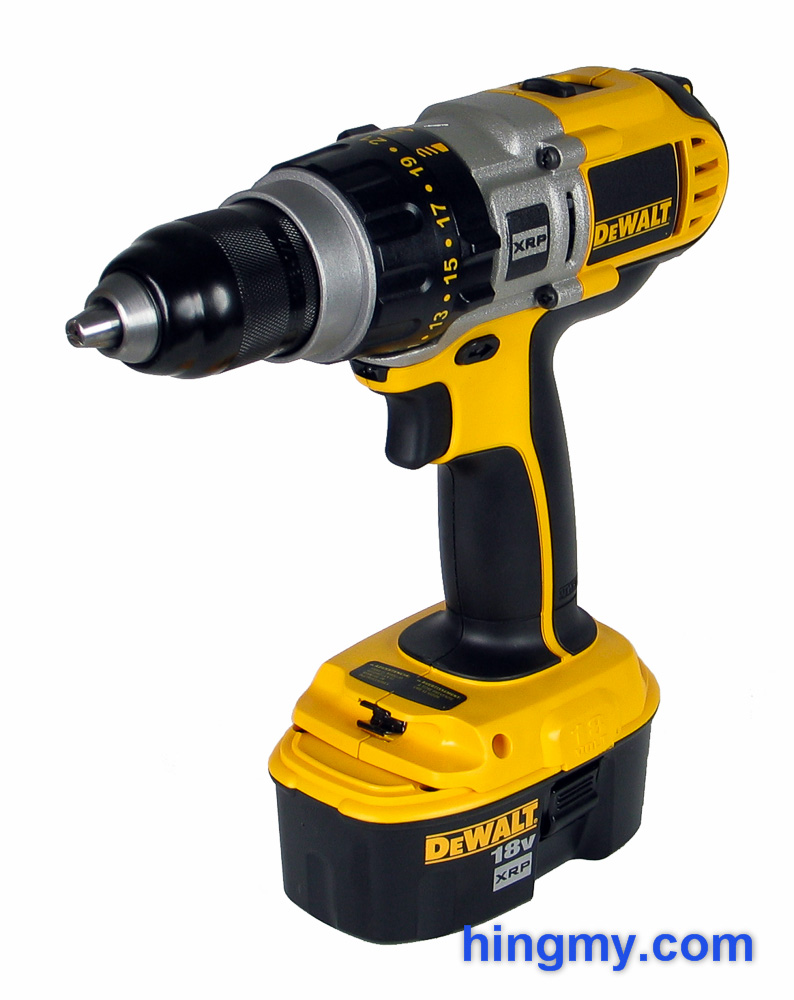 The clutch on the DCD940KX has 22 settings ranging from "hardly any slip" to "slips at the slightest amount of force". The clutch is adjusted with a ring on the barrel of the tool just behind the chuck.

A second ring is used to switch the tool from driver-mode into drill-mode. In drill-mode the clutch is locked in order transmit the maximum amount of torque to the drill bit. 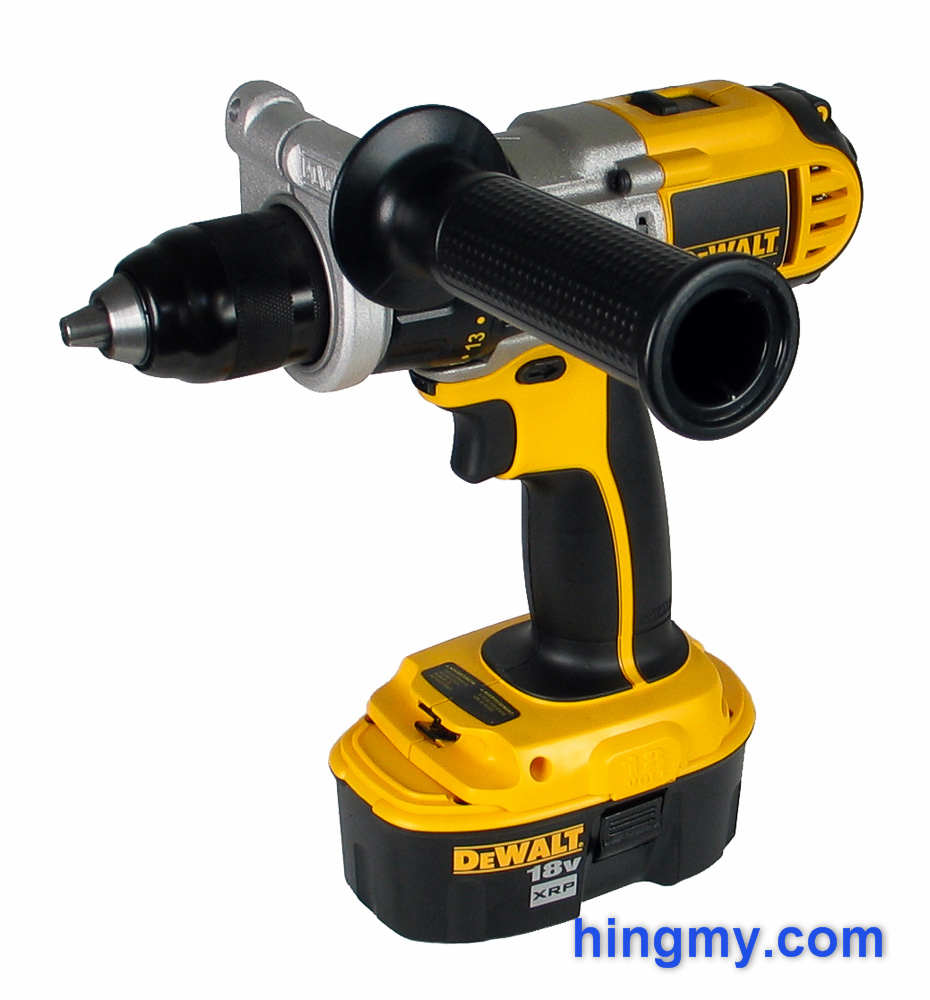 DeWalt believe so much into the power of this drill that they ship a detachable forward grip with it. The grip attaches to the barrel of the tool just behind the chuck. It slips on easily. Rotating the grip tightens a lock nut until the grip no longer moves. The grip can be rotated and tightened down anywhere on the full 360degree arc around the barrel of the tool.

The grip itself is of very high quality. The compression fitting is made from the same material as the gearbox of the tool. I have no doubt the grip will outlast the tool. It's a pleasure to install and use. Handling of the drill does improve with the grip installed. 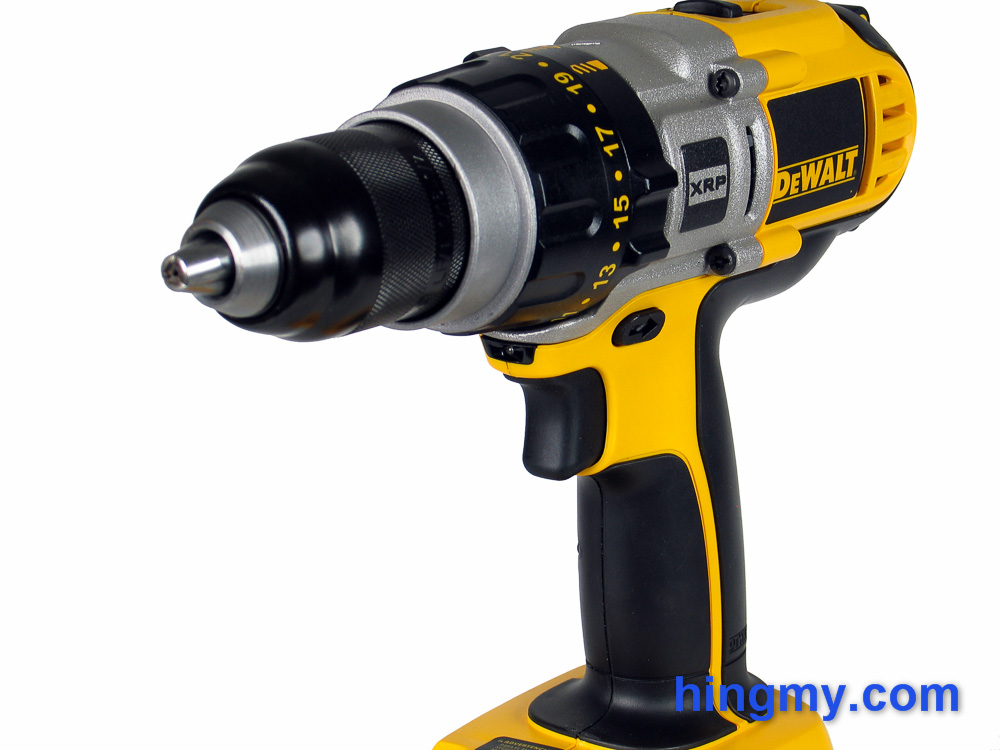 The light projects a cone of white light directly forward. The light is strong enough to use the drill in complete darkness. Unfortunately the spot light is mounted too close to the chuck of the drill. The chuck casts a shadow that covers the tip of the drill bit. Depending on the length of the drill bit, the point the tip enters the work piece may be in the shadow case by the chuck.

The chuck is one of the strong points of the DCD940KX. DeWalt chose a very versatile1/2" friction chuck for this model. This give the user the widest choice of bits in the medium to heavy-duty drilling range.

To increase the durability of the tool the chuck is made entirely from metal. This gives the tool an incredibly professional feel. Not to mention, the chuck holds bits securely and is easy open and close. The chuck is undoubtedly one of the best on the market today. 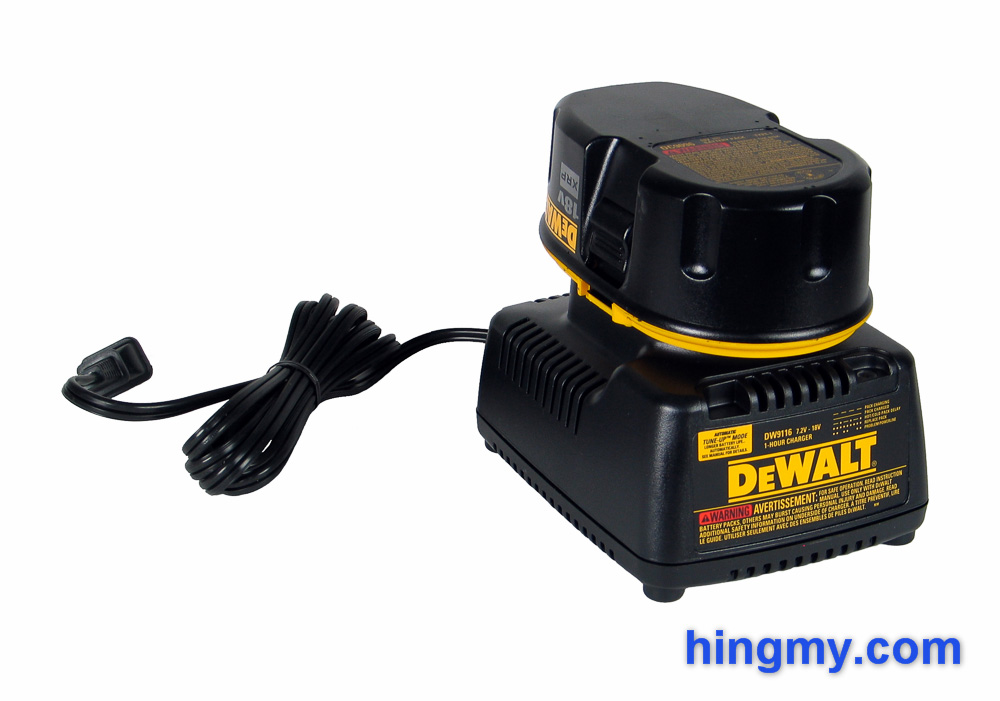 The kit version of the DCD940KX comes with a rapid-charger and two 18V Lithium ion XPR battery packs. The XPR batteries have been around for over 5 years now. They are a common sight on the job site and in contractors tool chests. Under heavy daily use the batteries last for several years. They are comparable to the best batteries available in the 18V range. In a residential setting the batteries will last for a decade or more.

The rapid charger holds a single battery. It chargers a fully depleted battery in about 45 minutes. The battery pack can be left on the charger without having to fear an over-charge scenario or even a fire. The charger automatically turns off when the battery is fully charged.

The DCD940KX's natural environment is drilling medium to large size holes into wood or metal. It has ample power to do the job all day long. I use my DCD940KX combined with an impact driver for furniture assembly. The drill creates the countersink holes for the screws. The impact driver drivers the screws home. Having a dedicated tool for each job eliminates bit changes. The DCD940KX could do it all alone, but having both tools around makes the job go much faster.

Drilling performance is exemplary. The DCD940KX keeps up with corded models in most scenarios. Being portable makes the DeWalt indispensable around the shop. It can drill large holes without being tethered to a wall socket.

It's possible to get the drill to bind when running large drill bits into hardwood. You really have to try to get it to do that by pushing too hard, however. Under normal conditions the drill is plenty powerful enough.

The DCD940KX performs admirably when driving screws. It has more torque than most cordless drills. Driving 3" screws into softwood is doable, but not as fast as it would be with an impact driver. Around the house the DCD940KX can be used as the main driver. On the job site it can do the job in a pinch.

The flat bottom of the battery pack makes the tool stand up straight. I like to use the drill as a hammer to tap framing members, door, and just about anything into place before I drill a hole. The tool takes this abuse without any trouble. The battery pack slides out of the tool just as easily as it did on day one. 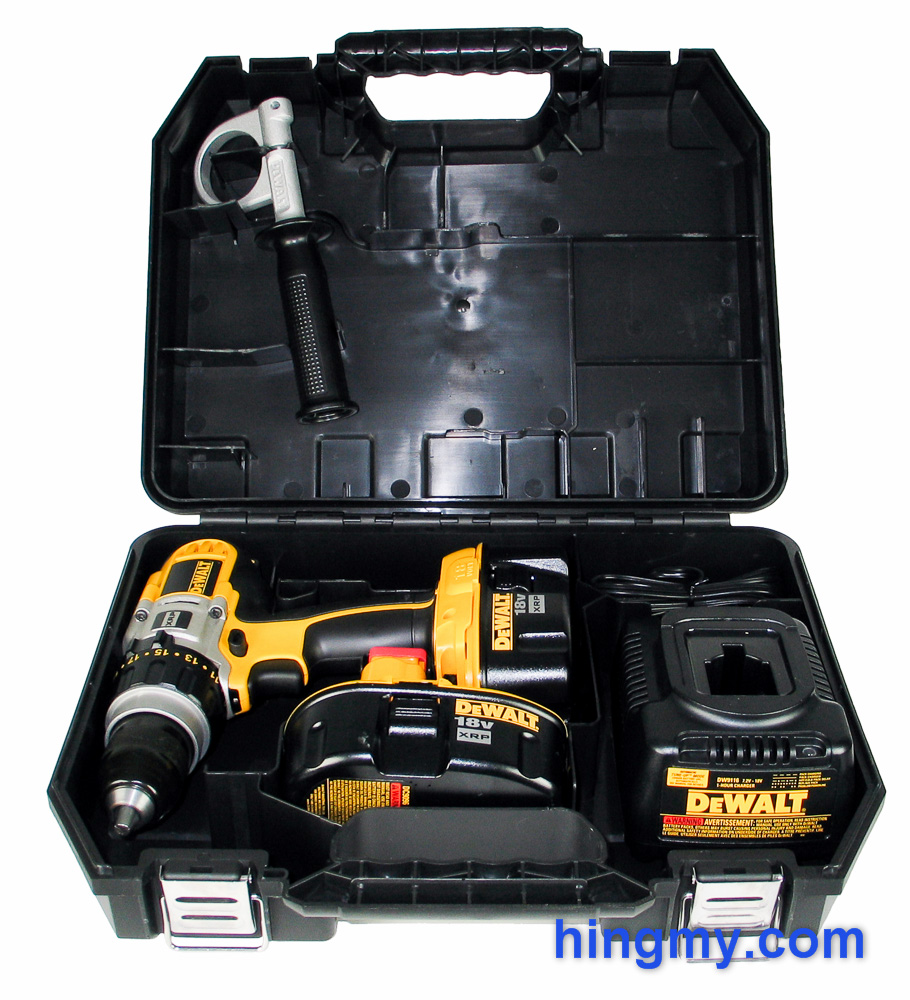 The DCD940KX comes in a hard plastic carrying case. The case holds the drill, two batteries, the handle, and the charger. When fully closed all parts in the case are secured tightly. The case can be handled without having to worry about damaging the tool. There is enough room in the case to store extra drill bits.

The case uses DeWalt's default design found on all their other products. These cases have proven themselves to be very durable and usable. This case is no exception.

The DCD940KX is DeWalt's most powerful cordless drill in the 18V range. If you do not need all that power, DeWalt offers the lighter DCD920KX. The DCD920KX is essentially the same drill but with a 14.4V battery pack. This makes the drill less powerful, but also lighter and less expensive. Overall the 920KX is an excellent value. The DCD910KXis the 12V version.

The DCD920KX is a good choice if you are going to use the tool primarily for small jobs. The DCD940KX is a better choice for professionals; it's main advantage being the 18V battery pack. While the pack does make the drill slightly more powerful, the core benefit comes from being able to share the pack between all your 18V DeWalt power tools. An 18V power pack is more versatile than a 14.4V or 12V pack. 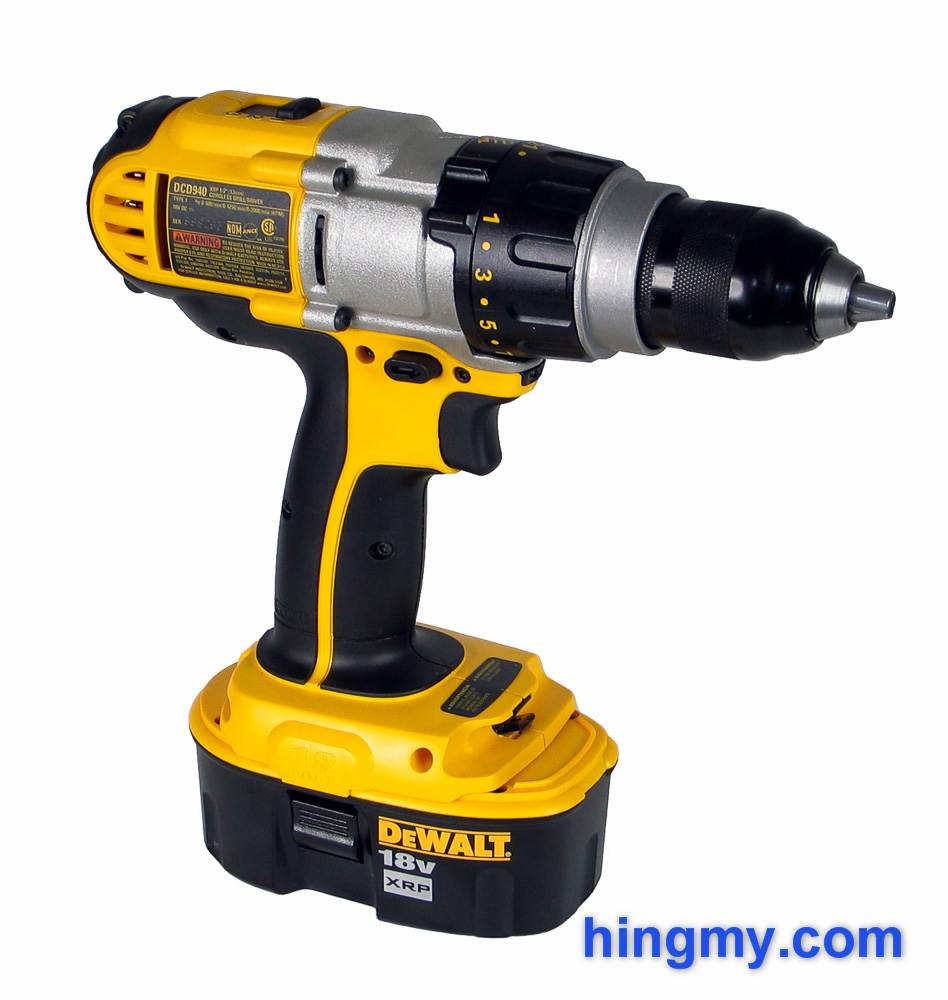 The DCD940KX is a no-compromise cordless drill from DeWalt. With a metal chuck and gearbox it has been built to do though work day in and day out on the job site. The drill has the power to be your go to drill for most task. The excellent 18V XPR battery packs and the rapid charger give the drill the staying power to work all day.