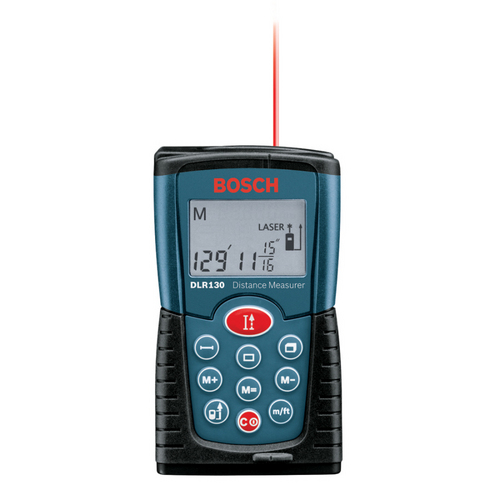 The digital revolution is upon us woodworkers. Our tried and true tools are becoming smart. Everything seems to have a chip inside these days. After having great success with the Wixey digital table saw fence, I decided to try out Bosch's new digital tape measure, the Bosch DLR130K. Let's take a look at how it performs.

The Bosch DLR130K uses a laser to measure the distance between the unit and an object. Think of it as a laser pointer that tells you how far away the thing you are point at is. It's that simple: point the laser at the target, press a button, read the distance from the display.

Right here the first limitation of the device becomes apparent. A laser range finder can only measure the distance to a solid object that the laser can bounce off of. The tool cannot be used to measure the length of a loose 2x4, for instance. To do that the 2x4 must be placed up against the wall. The device can then measure the distance from the other end of the 2x4 to the wall.

Bosch's marketing video tries to do a bit of cross selling, but it does provide a good overview of how the DLR130K is used.

The Bosch DLR130K was made for construction and finish carpentry. Measuring a wall is snap. I get accurate measurements in seconds. On walls longer than 4ft I have no doubt that the result is more accurate than what I produce with my tape measure. The ease with which a 15ft+ wall can be measured puts this tool in a different class altogether. Measuring a wall of this kind accurately was a two person job. Not anymore.

The tool has several modes:

As you can see, most of these modes are only useful in special situations. The ability to produce a single measurement and the willingness to do some math can compensate for the others. If you are an estimator, I suggest you do more research into the mode you need.

Like a calculator, the tool can store a single measurement in memory. In addition, the tool always displays the last measurement taken. This makes it possible to take two measurements to the chop saw. Cut the first piece according to the measurement displayed, press the recall button, and cut the second piece.

I don't use this feature at all. Two measurements is neither here nor there. Most of the time I am working on a single piece. When I am working on a room full of pieces the memory function cannot take the place of the old fashioned pen and paper. The Bosch DLR103k does, however, fill the page with measurements much faster than a tape measure.

The unit is powered by 4 x AAA batteries. Bosch claims a battery live of ~30,000. I have, obviously, not seen my batteries run down yet. The high-end Bosch units use built-in batteries.

The DRL130K is a very light device. The laser and processing unit are not very heavy. Most of the weight is in the batteries. In 5 years, when lasers are common place, I can see entry level devices like these to be sold for $20-$30 at the hardware store.

Bosch, however, did not cut any corners. The DLR130K is rugged, within limits. It won't survive being dropped 100 times, but it will probably survive a few falls. It won't break during normal use, but it has a definite life expectancy. I suspect the buttons are going to wear out after a few years of use. Since Bosch bothered to sell the device with replaceable batteries, I suspect it'll last a multiple of the 30k measurements a single charge can produce.

All together the Bosch DLR130K deserves the label of "competent and economical". It's build is economical, but not enough so to compromise performance. If you plan on using the device every day, I'd consider one of the other Bosch devices.

If range is a concern for you, Bosch sells a longer range unit, the Bosch GLM80. In addition to a range boost to 265ft, the unit includes the ability to measure angles. The integrated Li-ion batteries may or may not be a selling point for you. The charger is included in the price.

The range of 130ft of the Bosch DLR130K is more than enough for my needs. The unit can reach clear across my entire house. Chances are that the moment I run out of range on my device, I will also not have the other tools to do the job. If you need the features of the Bosch GLM80 you already know. For the rest of us there is the DLR130K.

The GLR225 (Video), GLR500, and GLR825 extend the range of these device to an incredible 825ft. These are superior devices with an error of only 0.04in over this distance. The price changes accordingly.

Measuring the accuracy of the device is not easy. It produces the same measurements as my tape measure. That's not much to say considering that my tape measure is probably only accurate to +/-1/8".

More importantly, the Bosch DLR130K produces the same measurement every time when measuring the same object. That's very reassuring. Even on long runs I had to try real hard to get the device to show any variations in the result.

Unlike tape measures, the DLR130k's accuracy is not affected by temperature. It will produce the same distance measurement every time. But, off course, like any electrical device, it will simply not function when it gets too cold.

When taking a measurement it is imperative that the laser is parallel to the floor. On surface without reference points it is sometimes hard to find the correct alignment.

For tasks around the house where square corners and solid object are abundant, the Bosch DLR130K changed the way I work. Taking measurements is now painless. On long walls I used to walk my tape measure across the wall in sections. That took time and the results were not very accurate. With the Bosch any measurement is done with the press of a button. Digital tape measures are simply awesome.

The tool has highlighted the need to add a digital measuring system to my miter saw. As accurate as the Bosch DLR130k, I cannot do away with my tape measure completely. I still need it to measure the piece I am cutting at the miter saw. Someday I will go digital there too.

There are plenty of competitors on the market. I chose the Bosch primarily because of the excellent reputation the company enjoys with contractors. I was not disappointed by the DLR130K.

A digital tape measure is one of the tools that changes the way you work. After having used one, I keep wondering how I survived without one for so long. The Bosch DRL130K improves everything about the task of taking a measurement. These devices will find their way into ever carpenter's toolbox sooner or later.